The Underlying Dangers of Division 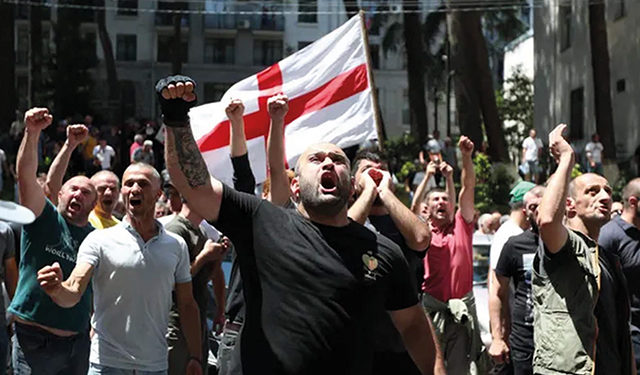 The concept of “Us versus Them” is something that has been a part of humanity since the infancy of our species. It could easily be argued that it was a piece of the proverbial mother that taught us the idea of self-preservation and unity among the “tribe” of either family or simply like-minded people. Perhaps it even guided us into our ascent to being the dominant species on the planet. However, in the modern era, this concept has been abused to such an extent that we are seen doing horrible things to our own countrymen and brethren.

This takes multiple forms; from refusal of entry across a nation’s borders to persecution and ultimately mass murder of a group of people. Any division is part of a “Divide and Conquer” strategy, even if those involved don’t realize it. If allowed to persist and develop, this often leads to much more tragic endings, one of which is genocide.

Genocide is an exceptionally strong word. First termed in 1944 as the Allied Forces discovered the atrocities committed by the Nazi regime, it quickly became used in legal terms during post-war war crime trials. In 1946, the United Nations General Assembly made genocide a crime punishable under international law. However, such atrocities are not uncommon in the modern world. Some do not elevate to the horrific level seen in Nazi-controlled Germany, Soviet Russia, or Communist China. Some have yet to be seen.

Dr. Gregory H. Stanton, the president of Genocide Watch, defined genocide very specifically by saying; “Genocide is a process that develops in eight stages that are predictable, but not inexorable. At each stage, preventive measures can stop it. It is not a linear process, but, logically, the later stages must be preceded by the earlier stages. Logically, the prior stages continue to operate throughout the process.”

Each stage is heavily rooted in the government-people relationship and the modern concept of democracy operating under the consent of the governed. The very concept of public officials working at the behest and betterment of the people is something that is relatively new in the broader concept of civilizations. Over time, the execution of this system has seemingly gone awry from its written ideals.

Most identify the first six stages of this list as not truly genocide. They are merely identifiers, and as Dr. Stanton noted, are simply warning signs of what could become reality. In addition, these steps are not mutually exclusive, but rather can occur either independently or concurrently. These eight steps have proven to be evident throughout history.

1. Classification
The first stage is the labeling of the “desirables” and “undesirables”. Both terms are completely subjective to the views of the individual and are formulated on the information they are given about other members of their society. Much of this is based upon political ideology, but other classification initiatives include the religious and the non-religious, vaccinated and unvaccinated, and foreigner and local.

The simple solution to this is the willingness to focus on commonalities rather than highlighting the differences. However, this is easier said than done, as the ideologies one pre-possesses become a part of the individual with enough indoctrination. Just as one who wields a sword accepts that the weapon is now an extension of themselves and their will, one who accepts an ideology allows it to become a part of themselves as well. The combination of this extension and the classification of another allows them to extend that reach to the perceived undesirables.

2. Symbolization
The application of a name or symbol to something foreign has been a part of human nature for a long time. However, the application of the names or symbols when applied to another group based solely on the inalienable characteristics of that group or their non-violent ideologies creates a sense of discrimination against that group.

This symbolization can take form in multiple ways. Historically, it has come in the form of dress styles, required identification devices, or even their being moved to reside in a different location away from the remainder of society. In the modern age, this has advanced to social media, with labeling and tagging of those deemed to be a part of various groups, organizations or having a certain ideology. A large part of this is the use of symbolism as a way to dehumanize that group.

3. Dehumanization
This stage involves the removal of humanity of those opposite to one’s own group. Complete removal of the idea that these people are even possessive of human identity and rights is accomplished during this stage. With classification and symbolization, dehumanization separates those individuals targeted to be removed from what is perceived to be “normal” society, as not only “outsiders” but as a “disease” or a “poison” to that said society.

Many times, these people are associated with already dehumanized groups. Linking the opposing people with communism, nazism, racism, facism, or any of the other litany of “-ist” or “ism” terms only helps with the distancing and dehumanizing effect. Once this is done, the effect of violent acts committed becomes much easier and far more acceptable to the populace inflicting the behavior.

4. Organization
The exclusion and discrimination of another group becomes systematic during this phase. In the past, the formalization of the persecution of those labeled as undesirables has even taken a bureaucratic model. Nazi Germany had an extremely rigorous and administrative method to the killing of their victims, as did the regimentation and conduct of the Interahamwe in the Rwandan genocide.

This organization is typically a legal power, represented in political bodies. This lends some semblance of authenticity to their push for the further persecution of the aforementioned “undesirables,” and protects the central government from responsibility. Their vision is then pushed out to schools, Non-governmental Organizations (NGOs), and foreign partners, to even further paint the image that they are in favor of purging the “undesirables” from their country.

5. Polarization
Using extremist entities in each sect as a platform from which to justify further violence and oppression is the next step. As factions separate even farther during the previous stages, those on the far fringes of each one will begin to lash out. Those that do not align to these radical subgroups are pressed to either affirm their allegiance or be labeled as a dissenter and therefore a supporter of the opposite side.

In addition, some of those extremist organizations don’t use traditional force of arms to accomplish their goals: they are able to, using the previously mentioned organization stage, weaponize government organizations to enforce their agenda. At this time, the protection of the targeted groups and other perceived opposition is required, not only by law enforcement entities, but also by the courts.

6. Preparation
Once each side has been polarized and the target group is dehumanized in the eyes of the majority that they are willing to take action, the extreme elements begin to make their moves. From the installation of special facilities to deal with the target group, to the armament of paramilitary and “special” teams, the build up to the executive step takes place. Displacement of those targeted is often initiated at this stage, moving people into places where they can be easily monitored and controlled. This is typically done in the open due to the feeling of security and imperviousness to the rule of law.

In most cases, this is the last stage at which real protection can be offered. Whether through foreign military or diplomatic intervention, this is the last chance for a true atrocity to be prevented. However, this is also dependent on the political will of the foreign nations involved and the status of the connection between the national leadership members.

7. Extermination
This is an instrumental step that makes genocide what it is, particularly in a legal sense. From Hitler to Stalin, Mao to Pol Pot, this is what separates a desperate situation from a national disaster. The deaths in numbers exacted by the aforementioned individuals is a key testament to the importance of the building blocks above to ensure that this phase meets their goals.

With government support, the military and the paramilitary forces previously created will deploy to carry out this step. At this point, the only means with which to curtail the violence is through immediate deployment of an overwhelming foreign joint task force, typically consisting of NATO or UN military components. By drawing the local armed forces away from the genocide and creating safe corridors for escape, the foundation for a return to stability can begin.

Any control that the government is given can all too easily be weaponized against the people. It is of vital importance that the people stay vigilant to not let social, political, religious, or cultural differences hand this power away. While the world has matured in its handling of such scenarios, it still remains in effect in some of its dark recesses. China and Myanmar still remain violators of these conventions.

It is not ultimately the sole responsibility of the people on the ground that commit the crimes. It truly is the concept of “Us versus Them” that is sown by the leadership, be it government or otherwise, that must be combated at first sight. Unity is sometimes too strong a word, but a sense of mere kinship and cohabitation is all that is required to thwart those that would seek to weaponized our natural differences.