The Switzerland of the Caucasus: Is Georgia’s Neutrality Sustainable? 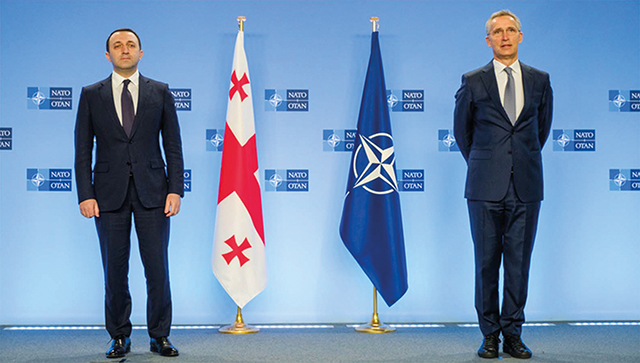 Leadership in Tbilisi has walked a thin line between two increasingly intimidating sides. Since the invasion of Ukraine, Europe and the larger West have rallied against Russia with a wide variety of unprecedented actions. In response, Russia has taken steps to bolster its own economy to counter the effects of the West and reach out to other third parties including China and India.

Georgia has long had social, economic, and political links to both sides. Trade and social connections to Russia have bent the nation to a stance of tolerance and appeasement, while deep-rooted aspirations to join NATO and the European Union continue the gravitational pull westward. These factors combine to force it into a curious position in the middle. Despite their aims to maintain amicable relations with both sides, can Tbilisi keep up relations equally with Russia and the West?

Prior to the invasion and ongoing war in Ukraine, Georgia had managed to keep a tenuous peace and amicable relationship with Moscow. Despite the continued occupation of a fifth of the nation’s territory, Russia also remained a significant economic heavyweight by bringing investment and businesses. In addition, the tourism boost from Russian citizens keeps matters peaceful at the street level.

In the wake of open warfare between Ukraine and Russia, the tone of conversation and relations seemed to change. With the aforementioned links, the Georgian government had been exceptionally hesitant to join any portfolio of Western sanctions. Following outcry from much of the population and the opposition in Parliament, attitudes began to shift, culminating with leadership joining much of the sanctions package. Additionally, Georgia submitted for membership and currently has an official questionnaire for integration into the EU.

However, the ruling party also accused opposition parties of instigating tensions. Prime Minister Irakli Garibashvili stated, “‘I am sure they are very frustrated that there’s no war here today. Has anyone thought where we would be if Saakashvili was in power?” referring to the now imprisoned third president of Georgia Mikheil Saakashvili, he continued, stating, “the war would first start in Tbilisi, then in Kyiv.”

Just as it has been for other corners of Europe, the war has driven some such as Finland and Sweden to revise their neutrality. Both of these have agreed to submit simultaneously as early as mid-May. Swedish Prime Minister Magdalena Andersson indicated that the invasion of Ukraine and the erratic behavior of Russian President Vladimir Putin had changed “everything.”

Yet, Georgia has continued its attempt at keeping a low profile. This positioning has caused a split in opinion. On one hand, Georgia has little to offer by increasing sanctions, and may even deteriorate their own socio-economic position by doing so. On the other hand, this presents a very unique opportunity to embrace NATO and the EU and display the nation as Western, safe, and secure for travel and investment.

It is unlikely a monochromatic decision on either can be made. Siding with Russia is an instant loss. The expected backsliding into rampant corruption, loss of civil liberties, and potential economic repercussions from the West make this a deadly gambit. While a bankroll from the Kremlin can seem lucrative, the lessons of capitulation in Grozny after the Second Chechen War should be heeded.

This very situation led to the rise of the infamous micro-dictator and Putin pet, Ramzan Kadyrov. His iron rule and ruthless use of secret police and military forces has virtually eliminated any semblance of democracy, economic advancement, and personal freedom in the North Caucasian region. While it can be said this is an extreme version of capitulation, it should act as a harsh reminder of the tax Moscow imposes on its subjects.

Full and unwavering allegiance to NATO and the EU also has its pitfalls. While the allure of significant economic and national defense are immense, EU officials say Georgia has yet to show it can contribute appropriately. Acceptance under suspicion is unwise and leaves leadership in Tbilisi with an excessive burden with Brussels.

Russia is likely to view this move as an affront to their sovereignty, a ludicrous but threatening claim made in reference to Ukraine prior to their invasion. Similar threats are likely to be leveled against Georgia upon a path being open to the EU, and certainly to a path to NATO such as seen with Finland and Sweden. However, Georgia’s size and NATO’s inability to defend such a distant neighbor in a rapid manner could spell doom for the nation.

As a result of both these pathways, Tbilisi will have to carefully weigh their decision. However, it is more likely the road to positive and meaningful development of the nation leads West. Ruling members in Parliament have routinely touted themselves as champions of democratic values, an open economy, and a progressive society. If these claims are not the stereotypical bloviations of political figureheads, then acting on these ideas is imperative.

Rarely in geopolitics is there such a distinct bipolarity of diametrically opposed positions and an impossibly thin line in between. Georgia historically has walked this thin line, from the ancient world to today. However, with the rapid increase of Eurasian tensions and interconnectivity on multiple levels, the sustainability of neutrality becomes highly questionable. Georgia’s desire to toe this line and maintain a policy of appeasement for both sides may not be enough to keep from tipping in either direction.