The South Caucasus and the New Hierarchical Order 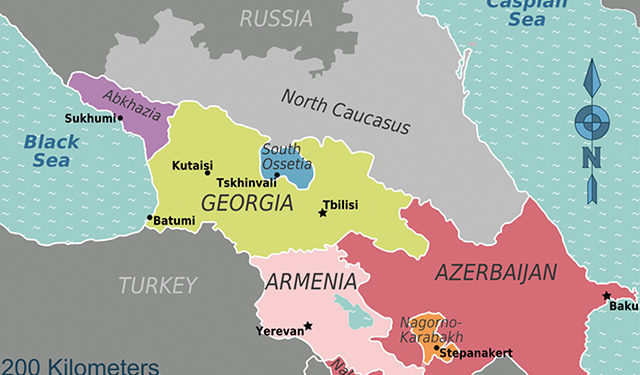 Georgia, at the center of the Caucasus, will play an important role in the new order. Russia, Turkey and Iran will try to involve Georgia in its peace and security initiatives

Recently, the question is often asked in Georgia whether the country’s foreign policy is changing. The trend is once again about Georgia “either with the West or with Russia.” The reality may be more nuanced: the country will be neither with the West nor with Russia. We may be witnessing attempts to establish a multi-vector foreign policy course. The reasons for this vary and include problems both in the EU and generally in the liberal world order in general. In parallel with these changes, a new order is emerging in the South Caucasus, where Georgia’s role will be critically important for the large neighboring countries.

Thus, in the years ahead, Georgia may face qualitatively greater challenges than it has done so far. The country’s foreign policy fixation on the West has brought multiple benefits, but compared to previous delays, this time the issue of Georgia’s NATO and EU membership has been postponed for a longer time. This, of course, pushes Georgia to seek a solution.

In a previous article, I suggested that the solution might be to introduce a multi-vector foreign policy course. This means strengthening relations with the major players in Eurasia, which will help Georgia develop a more balanced foreign policy. The deepening of relations with the West will remain Tbilisi’s official foreign policy goal, but this aspiration will no longer be inflated with unrealistic expectations. A realistic approach will create more foreign policy space for maneuvering. As the world is moving fast towards a multipolar system, Georgia’s location provides an opportunity for more active diplomacy in the wider Middle East and Eurasia as a whole.

If, in the 1990s, Georgia was in a phase of severe internal turmoil, foreign policy or current world events in general were developing positively for the country. Russia’s influence was diminishing, while the West was ascendant. The world was moving from the bipolar world order to a phase of American hegemony. For a small and poor country that wanted to escape Russian influence, these global shifts created a beneficial geopolitical environment. Consequently, a long strategic window opened before Georgia, which was squandered prior to 2020 by both Georgia and its Western partners – the blame for the country’s failure to join NATO and the European Union can be put on both sides.

Today, the situation is different. The liberal world order is experiencing a severe crisis. The problems are both within the system and externally, caused by the rise of China and the anti-Western actions of other Eurasian countries. In the new situation, with Georgia unable to become a member of the European Union and NATO in the near future, the country needs to look for a more multi-faceted vision.

However, as we discussed above, the geopolitical situation around Georgia is becoming more difficult. First, the concept of spheres of influence has reappeared in the region. Second, the balance of power idea is increasingly becoming a foreign policy mechanism for Eurasian middle and great powers.

What will the new world order be like and what place will the South Caucasus have in it? The world will consist of two large and several small centers. The US and China will be two leading players. Both will be surrounded by a number of closely aligned countries. The recent Australia-UK-US tripartite alliance agreement (AUKUS) is one of the steps taken by Washington toward this end. While China’s vision for a formal union is different, Beijing will try to unite illiberal countries around itself who will support relations built on Westphalian principles – territorial integrity, sovereignty and non-interference in the internal affairs of another country.

In addition to China and the US, Russia, India, Turkey and Iran will try to build small exclusive geopolitical zones along their borders. But their efforts will be largely tied to the interests of Washington or Beijing.

The future world order will be chaotic. It will also be hierarchical, with China and America playing a leading role, and others having a lesser impact. Nevertheless, this will form the Eurasian order.
The South Caucasus will be at the center of these global changes, as the region is bordered by three major players of the Eurasian continent – Russia, Iran and Turkey. All three are driven by more or less identical foreign policy goals, among them the withdrawal of non-regional forces from the South Caucasus, i.e. that the collective West should be minimally present or completely excluded from the ongoing processes in the region.

Consequently, the emergence of a new order in the world will lead to the establishment of a new order in the South Caucasus. Like the hierarchical world system, a similar structure will be created in the South Caucasus. Russia will be the major power. Moscow is well aware that it is impossible to create an exclusive order. Today’s Russia cannot establish full control over the South Caucasus, as was done during the Russian Empire and the Soviet Union. This requires having adequate resources, which the economically weak Russia does not currently have. At the same time, geopolitical prestige is needed, which Russia is slowly losing, as reflected in the excess of the military element in the Kremlin’s policy in the South Caucasus. Maintaining influence in the region is being achieved through the creation of a larger number of military bases, a clear example of which is the deployment of Russian peacekeepers to Nagorno-Karabakh.

Therefore, Russia will try to establish a more hierarchical order in the South Caucasus. This order will be based on close cooperation with Turkey and Iran. Moscow’s hegemony will be recognized by Ankara and Tehran. However, this does not rule out disagreements between these three forces, or sharp diplomatic and economic competition. Attempts to replace the hegemon will also be active in the new hierarchical order. In this regard, moves by Turkey, which will try to contain/reduce Russia’s influence by increasing its influence in Azerbaijan and Georgia, will be expanded. Ankara will also try to normalize relations with Yerevan, which chips away at Russia’s influence – improved Armenia-Turkey ties means a decrease of Yerevan’s economic and infrastructural dependence on Moscow.

Georgia, at the center of the Caucasus, will play an important role in the new South Caucasus order. Russia, Turkey and Iran will try to involve Georgia in its peace and security initiatives. It will be difficult to build a new long-term order in the South Caucasus without Georgia. This gives Tbilisi some advantages. By agreeing to participate in the new order, Tbilisi might hope to get concessions on such important issues as security in the Black Sea, Tskhinvali region and Abkhazia. Consequently, with constant maneuvering and correct and consistent application of the idea of balance of power, Georgia can achieve more results than it has managed so far.

Along with the opportunities come many geopolitical threats. The main problem is that the establishment of a new order in the South Caucasus will significantly reduce the influence the collective West held in the region. This could drive a wedge between Georgia and the West which can be painful both economically and politically. Moreover, it may also affect the democratic process in Georgia, with anti-liberal tendencies becoming stronger.

Georgia’s success will depend on the proper use of these opportunities and the avoidance of threats. This will be difficult to implement because it requires a cohesive political class that is less radical and more focused on channeling national energy to achieve specific foreign policy goals. With the exception of Armenia, nowhere in the neighborhood is there such a fragmented political class as in Georgia. This once again confirms the idea that the achievement of foreign policy success for Georgia largely depends on the solution of internal problems.