The Sit Down: Ukrainian Refugees Fleeing War and Geopolitics 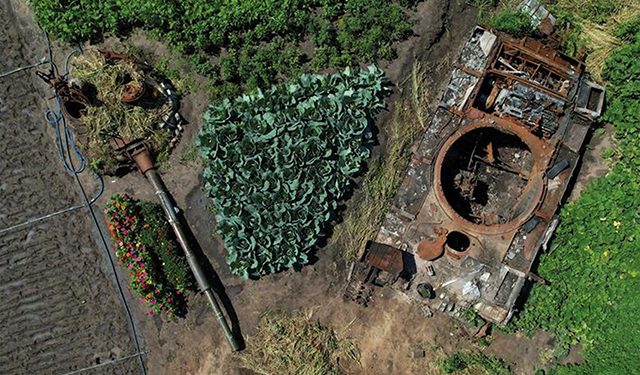 A destroyed Russian tank is seen in a backyard garden of a local resident Valerii in the village of Velyka Dymerka, Kyiv region, Ukraine. Photo by Valentyn Ogirenko/REUTERS

Twelve million civilians have fled the ongoing fighting in Ukraine since Russia’s renewed invasion on February 24. Of these, a reported 7 million are still inside the embattled country. As Russia’s reach deep into the country, through missiles and air strikes, continues, more people are unsure about the sustainability of living a normal life.

One family had endured this long before the recent invasion. Russia’s first incursion in 2014 caused thousands to turn west, among them Dmytro and Anna, who chose Kyiv as their place of refuge. As the occupation line degraded into stagnant trench warfare, the hopes of returning to their lifelong home dissolved. As the years passed, Kyiv became a place of safety and community for them.

Sadly, this was short lived. Russia’s second invasion in February forced the family out of their new homestead to the relative safety of the far west of the country. Dmytro and Anna have seen their home taken from them twice, not only by the Russian invasion forces, but by roots that go deeper into the politics of the region. GEORGIA TODAY sat down with Dmytro and Anna to discuss their experiences, difficulties of life in modern-day Ukraine, and what their options look like and their future holds.

Briefly, can you describe the changes in life between living in eastern Ukraine before 2014, life after the first invasion until 2022, and then life after the February 24 invasion and leaving Kyiv?

Anna: Before 2014, for me personally, it was carefree. I turned 20 in 2014, so I was studying and living with my parents. When everything happened, it was painful, we had to leave our lives and our parents. Now, it is even more painful.

Dmytro: I didn’t think I would have to move to a different city or leave Donetsk. I never really liked it there, though. Now it is clearer than ever, but even then the city was populated by pro-Russian people. I had been thinking about getting an apartment, the city is well developed, with decent industry and services. In Kyiv, the city we left this time, it was much better. Come to think of it, I realize Donetsk never really was home. But in the five years we lived in Kyiv, it truly became home for us.

What would you say are the most difficult parts of life now?

Anna: It might seem like a joke, but waking up to air raid alarms now is a bit annoying. We only think of it as a joke because everything is a bit tough. We don’t know if everything is going to end soon, or ever, and everything seems boring and difficult. But you push yourself.

Dmytro: It’s like that photo on the internet of the vending machine with the sign that says ‘the light inside is broken but I still work.’ That’s how it feels. Thankfully for us, we are in a safer part of the country, to a limited degree.

Can you elaborate a little on what you fear the most during daily life?

Anna: It would probably be a nuclear bomb. You never know if it’s going to come, and it’s always a threat. I wake up watching the news feed, saying, ‘please, no nuke,’ because you never know what’s in Putin’s head. Then, shelling in general.

Dmytro: For me it’s fifty-fifty that either the Russians are going to send an unconventional or nuclear missile, or our local government is going to make some incompetent decision that’s crazy in nature.

Do you think you will be forced to leave the country forever? If so, where would you go?

Dmytro: ‘Want to’ is not really an option. ‘Unable to’ is the reality, but I’d say Europe ideally. Certainly a NATO country, because as useless as some might perceive NATO to be right now, I don’t think Russia would dare do anything to them. I don’t think any country bordering Russia is safe right now, at least until they lose their nuclear arsenal.

What are your personal views on the involvement of NATO and other Western countries in supporting the Ukrainian armed forces? Is it making a tangible difference for you/your community?

Anna: We had high hopes for NATO, especially in the early weeks of the war. People here were asking NATO to close the sky and they said they don’t want to anger Russia. With that we lost a lot of hope and trust in NATO. It seemed so useless as countries pay so much money to be a member of them, both the NATO and EU. Especially the EU, they do nothing and stand by and say they are concerned. I’m not sure NATO is the right way to go for us, but then again, Russia is unlikely to stop bombing us any time soon.

Dmytro: In terms of EU involvement, at least they provide some support in the form of weapons. These are relatively light weapons such as firearms, Javelins, NLAWs, and things like this. While these are good, particularly after everyone thought Ukraine would fall in under a week, most of these weapons are more for guerilla warfare.

If I was writing this, I would put this in bold caps; we are very slowly getting heavy weaponry from Western countries. This includes the HIMARS, M777s, and M270s but the problem is that it’s very slow. As I understand, they have more transport planes capable of delivering them, but maybe they are afraid of angering Russia by sending too much, too quickly. The HIMARS especially are very effective, such as in Kherson.

Anna: They say that in occupied Kherson the Russian soldiers are very paranoid. The locals have said the soldiers look like astronauts because of all the equipment they have on, they’re really protected because they’re scared of the HIMARS. The fear is also that Kherson will be liberated soon because of this support. It proves that we need more heavy equipment.

Will there come a time that you see yourselves going into the military/police/security service out of desperation?

Anna: For me, it’s out of the question. That’s a part of the conscription, but it’s forced here for all men. But for some men, it’s more useful to keep them doing what they are doing, such as businessmen or IT workers. It’s more useful than having them die or become wounded. For me, I’m more useful where I am because I earn money, pay taxes, and donate supplies and money to the army. That’s not just the argument for me, but for a lot of people here.

Dmytro: For me, it’s very much the same. For anyone that’s been following this war, you’ve seen the cruise missiles we used to sink the Russian ship Moskva, and also the artillery we used to liberate Snake Island. Both of these were prototype weapons and not listed as official weapons of the Armed Forces of Ukraine. The development of both started between 2014 and 2019, and the funding stopped sometime after 2019. This was sometime after the presidential elections.

Volodymyr Zelenskyy has widely been praised as a hero of the republic, a savior of Ukraine, etc., but not everyone in Ukraine shares this perspective. What do you see in him as a national leadership figure?

Dmytro: Well, when we were driving out of Kyiv at the start of the war, I was driving the car and Anna was checking the news constantly. It was an emotionally challenging period of time, for sure. I felt quite a bit of respect for him because he didn’t run away. Apparently, there was some conversation, I’m not sure if it took place or not, but the US offered him a helicopter ride out of Ukraine and he said he needed ammunition, not a ride. But now, unfortunately, that respect is long gone. We have a lot of questions for him, much more than we had with Petro Poroshenko.

Anna: His concept was ridiculous. They were trying to shape [former US President Ronald] Reagan out of him and say ‘look they had Reagan and now we have Zelenskyy.’ Just because it worked in one country, doesn’t mean it will work here as well. His predecessor, Poroshenko, was fighting on all fronts and refused to let people forget that there was a war going on. He constantly said we needed a bigger army, wanted to popularize Ukrainian as the national language, bring in the Church, and that we needed to be one nation. He had his share of scandals and things he needs to be responsible for, so he’s certainly no saint, but he was perfect for that time. However, so many people were tired of hearing about the war.

It seems this war is not going to end anytime soon. What does the future hold for your family?

Anna: I would like to stay and eventually go back to Kyiv. But everything would have to stop because even now there’s too much bombing and shelling. Kyiv really did become our home. I somehow always grew up knowing I would live in Kyiv, even when I was living in Donetsk.

Dmytro: I really don’t know. While I do have my friends here, there is the matter of my parents. They are still living in occupied Donetsk, and I have no idea when it’s going to be de-occupied, if at all. Honestly, I’m not sure it needs to be de-occupied.

Kherson and Zaporizhzhia definitely need to be de-occupied, and there’s a good guerilla movement there and general local resistance. In Donetsk, Luhansk, and Crimea, there is no resistance. The people there are ok with or actively support Russia. My family has been living there since 2014, I saw them in 2018, and I have not seen them since.

Kyiv did become home, but I realize it’s not going to be entirely safe until Russia loses its nuclear weapons. Even if they don’t use them, it still gives them leverage and an attitude that they can do whatever they want. For now, any Ukrainian who can should at least try to go to a different country, because if the West isn’t going to do more, then it’s not going to be safe here.