The Sit Down: Natia Mezvrishvili and the Political Battlefield 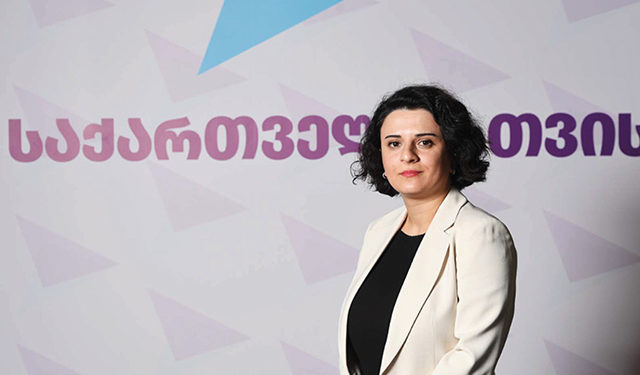 Natia Mezvrishvili is the Deputy Chairman of the political party “For Georgia” as well as a law lecturer at Ivane Javakhishvili Tbilisi State University. Source: forgeo.ge

Seizing more and more of the headlines, the political sphere in Georgia has become increasingly polarized. Various groups, including the business and investment community, the Georgian Orthodox Church, the press corps, pro-European integrationists, Tbilisi PRIDE, and a host of others, have been pressed into service against each other. This new socio-political battlefield has many combatants, but none so more engaged than some of the leadership of the involved political parties.

Georgian Dream and the United National Movement have largely stolen the spotlight. With the current fight raging over the recent incarceration and treatment of former President Mikheil Saakashvili, these two long-term rivals have resorted to a by-any-means-necessary battle of attrition. Aimed at undermining and chipping away at each other, many of the other topics du jour have fallen by the wayside.

Seeing an opportunity to capture public favor, the “For Georgia” party was founded in late May 2021, as a response to the aforementioned turmoil. Giorgi Gakharia, the former Prime Minister of Georgia, took on the position of Chairman for the party following his resignation, which was partly caused by the controversial arrest of Nika Melia, Chairman of the UNM party. In one of his first acts as Chairman, Gakharia seized the opportunity to onboard Natia Mezvrishvili.

Growing up in the Georgian Soviet Socialist Republic, Natia Mezvrishvili found her calling in protecting justice. After vehemently pursuing a law career at Tbilisi State University, she quickly moved into the the Office of the Prosecutor General of Georgia. Rising to leadership roles in this office, she led multiple reforms in internal and national legal procedure. After moving across to the Ministry of Internal Affairs and serving as the Deputy Head for almost two years, she then took on her most famous role as the Head of the Government Administration of Georgia.

She has held multiple roles as a lecturer at her alma mater, as well as being an expert resource on law and human rights. With her history in these fields, as well as reform and a passion for Western partnerships, she has brought all of this experience to “For Georgia.”

Discussing the recent elections, she has her frustrations. With many videos, reports, and perceived shortcomings given by the international observing parties, the allegations of intervention at the ballot box level seem to have some ground. While the need for an investigation is needed, Mezvrishvili is doubtful that it will be launched in the current political climate. “For Georgia” still managed to gain some seats, but not as many as are still being sought.

On Saakashvili, as with so many others in the center, she finds that neither side in the issue is doing themselves any favors. Since she and her party aim to be the more centric medium in the political landscape, the legal fact of Saakashvili’s imprisonment and his right to fair treatment and due process are the main issues. However, these issues are separate. Incarceration due to alleged crimes in pre-trial holding is not unusual. It is the alleged neglect and abuse, along with the right to be tried in an unbiased and timely manner, that are the real issues, she believes. As a long time pursuer of reform and human rights, Mezvrishvili passionately agrees that it is imperative that Saakashvili be treated correctly. In addition, his high profile status brings only more watchful Western eyes to the country at a time when criticism is undesired.

Yet, Mezvrishvili genuinely believes that there are more pressing national matters than the sparks and clashes between these two warring parties. A refocused effort, she outlines, on the lower level matters of the people have seem to have gone out of focus in favor of the Hollywood-esque political sparring taking place on television. Tax, law, education, infrastructure, and international partnerships need the spotlight, she argues.

While sitting down with GEORGIA TODAY, she offers a vision of what she sees as the more important items on the socio-political agenda. She rolls her eyes at the mudslinging between the UNM and Georgian Dream, asking only what good can come of such theatrics. While many might agree with her, the battle of these titans seems to have drawn the crowds as if it were some modern form of gladiatorial games.

These crowds have thus far continued to throw in their votes along with that attention, and “For Georgia” will be forced to offer something else to the voters. They have a particular eye on the younger voters, those with a penchant for “fast food politics” who need small pre-packaged ideology that they can digest easily. For the near future, Mezvrishvili and her team certainly have more work cut out for them than any of the others fighting in the ring.