PMC RC stands firmly with Ukraine, supports its sovereignty and territorial integrity, and condemns Russia’s ongoing military aggression. At this horrible time, we will of course maintain our long-standing commitment to support Ukraine’s democratic progress. While the most devastating outcome of this war is the humanitarian catastrophe of Ukraine and the destroyed lives of people, it is also essential to discuss the ramifications of this war that are being felt worldwide. In this bulletin, we discuss threats to the food and energy security of Georgia amid Russia-Ukraine War. 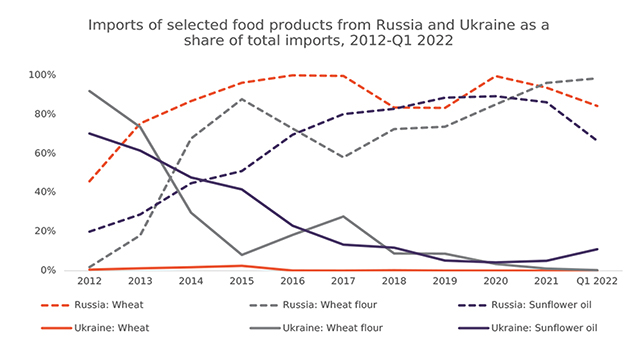 Russia and Ukraine are prominent players in the global trade of food and agricultural products. Pertinently, wheat exports from Russia and Ukraine accounted for 30% of the global wheat market in 2021. Furthermore, in 2021 exports from both countries combined represented 55% of the world’s sunflower oil supply1. In terms of energy provision, Russia supplies 11% of the world’s oil, making it the world’s largest exporter of this precious commodity. Meanwhile, Russia is the top gas exporter globally as well, supplying 19% of the world’s natural gas. Thus, Russia is a major player in the global energy market, with Europe in particular being highly dependent on Russian gas and oil2. 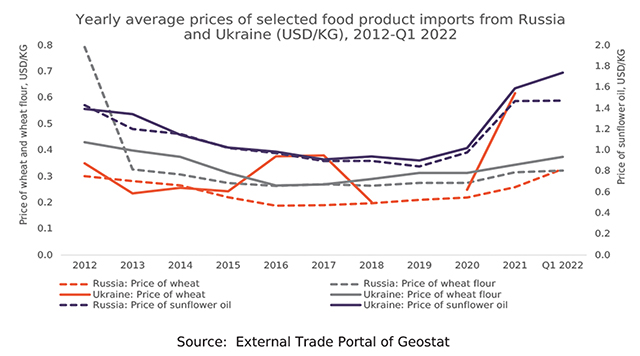 Observing the dynamics of imports of wheat from Russia and Ukraine throughout the last decade reveals that imports of wheat from Ukraine has represented only a minuscule proportion of total wheat imports to Georgia (annual average of 0.6% of total wheat imports) and Russia (86.1%) has been the main source of imported wheat by a considerable margin. This can be explained by the combination of the relatively low price of wheat from Russia (with an average annual price of $0.24/KG), compared to Ukraine ($0.32/KG) and the relatively low transportation costs of importing from Russia. From 2012 to 2017, Russia’s share of wheat imports increased steadily, followed by a drop in 2018-2019 due to low crop yields and increased prices in Russia. At that point, Georgia began to embrace Kazakhstan as an alternative source of wheat imports4. Since then, the prices of imported wheat from Russia have also shown a significant increase, peaking at $0.33/KG in Q1 2022, which could be attributed to the combination of the imposed export tariffs on wheat by Russia since June 20215 and the economic shock of the war in Ukraine. However, it must also be mentioned that the share of Russia is still retained at a high level, reaching the maximum of 99.5% in 2020. 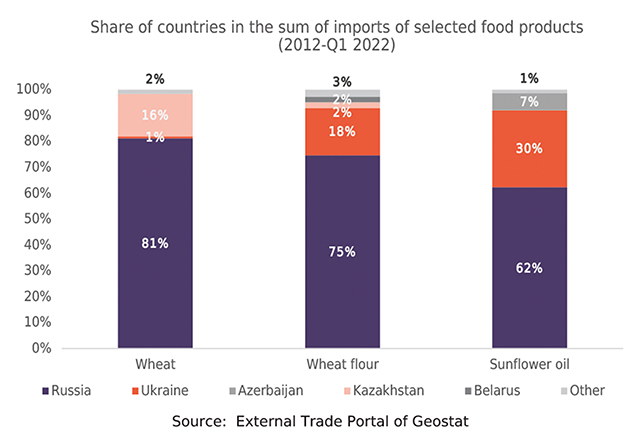 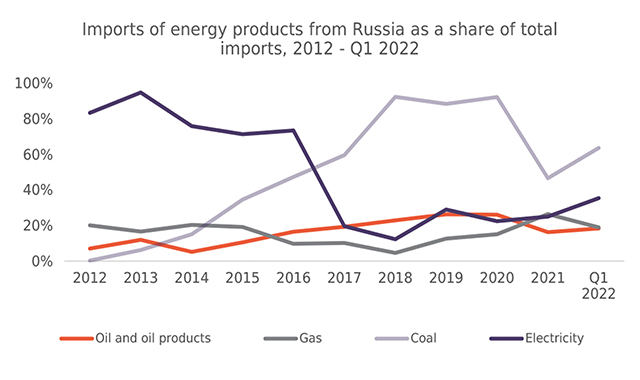 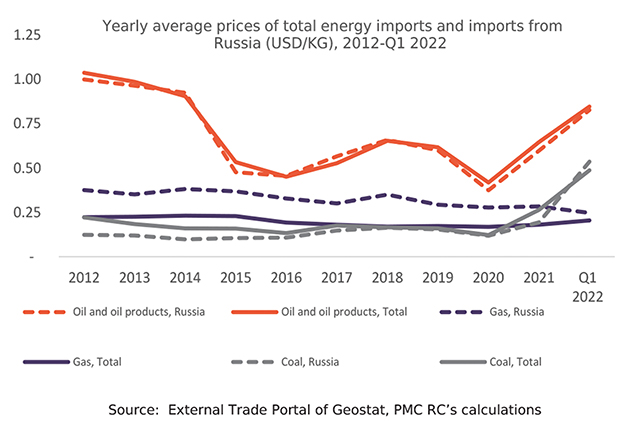 Finally, considering Georgia’s lack of import diversification in the reviewed products, some of the other major global exporters of the covered products are worth mentioning. According to FAOSTAT, in case of wheat, the USA and Canada follow Russia as the top exporting countries, however, due to logistical issues other less globally prolific exporters could be more relevant to Georgia, including Kazakhstan, Romania, Bulgaria, Poland, and Hungary. For wheat flour, Turkey is among the top exporting countries, followed by Kazakhstan, both of which could be appropriate sources for the Georgian market. Apart from that, Turkey is the third-biggest exporter of sunflower oil after Russia and Ukraine. However, despite the attractiveness of Turkey as a trade partner, to stabilize local market conditions, it imposed temporary export restrictions in March 2022 on a number of food products, including grain and cooking oil7.

Energy Security
The Georgian energy market lacks its own sources and is highly dependent on imports. Indeed, Georgia’s energy production covered only 21.1% of its total energy demand in 20208. Considering that Russia is a major energy exporter across the global market but is currently being targeted by large-scale sanctions aimed at damaging its economy and limiting its role in global trade9, it is crucial to ascertain any possible threats this development may pose to the energy security of Georgia. 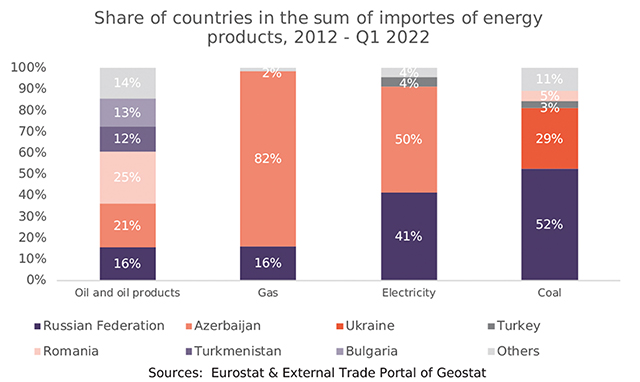 In 2020, Georgia imported only 6,162.8 terajoules (TJ) of electricity, while producing 40,175.3 TJ itself (meaning that only 5.3% of its domestically available electricity came from imports), which suggests that Georgia is largely capable of satisfying domestic demand for electricity. However, of the electricity Georgia imports from abroad, a considerable share comes from Russia. In 2020, 23% of Georgia’s total expenditure on energy imports went to Russia, but by Q1 2022 this had increased to 36%. From a longer-term perspective, Georgia’s dependence on Russian electricity imports has notably declined during the past decade – the share of Russian electricity imports was as high as 95% in 2013.

The domestic production of electricity in Georgia is tied to gas imports. Notably, 72.7% of electricity produced in Georgia was generated in hydropower plants (HPPs) in 2020, but 24.3% came from thermopower plants (TPPs), which rely on imported gas. Overall, natural gas accounted for almost half (47.1%) of the total domestic energy supply in 2020. Unlike electricity, for gas Georgia is almost fully dependent on imports – in 2020 Georgia, imported 99.7% (97,050.4 TJ) of its natural gas. In Q1 2022, Georgia spent $184 million on gas imports and 19% of this expenditure went to Russia. The average price of gas to have been imported to Georgia ($0.20/KG in Q1 2022) is generally lower than the average price of gas to have been imported from Russia ($0.25/KG in Q1 2022). This could be explained by the relatively low price of imports of Azerbaijani gas ($0.20/KG in Q1 2022), which accounted for the remaining 81% of imports in Q1 2022.

The majority of coal used in Georgia is imported (82.3%), but coal makes up a very small share in the energy mix of Georgia (only 4.7% in 2020). The price of coal and, accordingly, the total expenditure on coal imports, is also low but Russia is the major exporter of coal to Georgia with 64% of Georgia’s coal import expenditure going to Russia.

Looking at the sum of Georgia’s expenditure on imports of energy products by country for the period of 2012 until Q1 2022, the energy market of Georgia is heavily concentrated. Moreover, the major player across all energy products is Azerbaijan, followed by Russia. Gas imports are the least diverse compared to other imported energy products, with 82% of gas being imported from Azerbaijan and 16% from Russia. The two major players when it comes to the heavily concentrated electricity imports are also Russia (50%) and Azerbaijan (41%). More than half of the coal imported during the covered period came from Russia (52%) and a large share (29%) also came from Ukraine. Georgia’s imports of oil and oil products are the most diversified compared of all energy products. The major players in this case are Romania (25%) and Azerbaijan (21%), but Russia also accounts for 16%.

Reliance on energy imports from Russia is currently one of the most critical issues in global political decision-making. The EU recently adopted €300 billion plan (RepowerEU10) to reduce its dependence on Russian fossil fuels. One objective of the plan is to increase the share of renewables in the EU’s energy mix, which is also relevant to Georgia, considering the potential of its hydro energy resources. As for further diversifying imports of non-Russian fossil fuels, the EU plans to increase imports from other large gas exporters such as the US, Canada, and Norway, to continue cooperation with Gulf states for oil imports, while for coal the US, Colombia, South Africa, and Australia are considered the most likely countries to fill the gap. Likewise, it is crucial that Georgia focuses its policies toward ensuring the energy security of the country, increasing its energy independence by fully utilizing the capacity of its own energy production (especially hydro energy), and diversifying its imports.

1 Impact of the Ukraine-Russia conflict on global food security and related matters under the mandate of the Food and Agriculture Organization of the United Nations (FAO)
2 https://www.iea.org/topics/russia-s-war-on-ukraine; https://www.oecd.org/economic-outlook/
3 https://ourworldindata.org/ukraine-russia-food
4 https://for.ge/view/53945/saqarTveloSi-rusul-xorbals-TandaTan-yazaxuri-Caanacvlebs.html
5 https://bm.ge/ka/article/ruseti-marcvleulis-eqsportze-kvotirebis-meqanizms-aamoqmedebs-/101831
6 https://businessformula.ge/News/5613
7 https://www.fas.usda.gov/data/turkey-turkey-imposes-temporary-ban-certain-agricultural-exports
8 Geostat ENERGY BALANCE OF GEORGIA, 2020. Statistical Publication 2021
9 See our publication: Assessment of the Effectiveness of Sanctions Against Russia
10 https://ec.europa.eu/commission/presscorner/detail/en/ip_22_3131