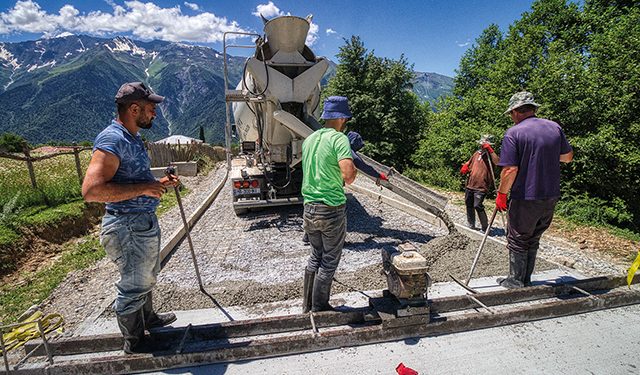 We are all used to our fixed travel surfaces being static while we move. This is normal in most situations, earthquakes being a major exception. Rivers and airways aren’t static, so that counts them out. But our roads and paths just lie there for our pleasure. Except when they are first being built, or renovated.

After a long time of waiting and rumors, last summer saw the beginning of the complete renovation of the main road through Etseri, running right past our house. While this won’t be asphalted, like the one through neighboring Becho, it will consist of steel rebar grids in a concrete matrix, over grading and gravel. Last year the workers started from the top of the village and completed a section to within 1km of us; now, delayed by much rain but pressing on at last, the new road has reached the house. This evening I will be instructed to move my car out of the yard to keep access to it for the following 3 days or so while the cement dries.

I have had plenty of time to observe the whole process of improving our terribly bumpy, washboarded hard clay road into its new incarnation. First, they dig and cement water channels lengthways, either on one or both sides of the old road. They add crosswise, slightly diagonal cement channels next, usually above houses like ours, to further carry water from rain or snow melt towards the river. (Our channel has already prevented almost all of the usual spring flooding of our yard this year by redirecting water elsewhere.)

They also put in large cement pipes and crossings where it’s necessary for vehicles to go over the lengthways waterways. Then they grade the old road with a large digger, smoothing it out, taking off the high points and filling in the low ones. This is already a vast improvement for drivers. Large gravel goes on top of that, adding regularity. 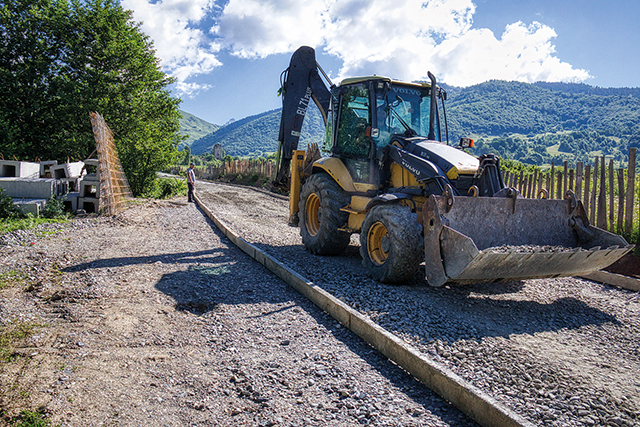 Next, wood plank sides to contain the thick liquid concrete (cement, sand, gravel and water). The grid squares of rebar, a few meters on a side, go down on the waiting surface, and finally the concrete, from a large mixer truck coming all the way from Mestia, closest such supplier, 30 km away. Once this dries, the side planks are removed and taken downhill to be reused.

We’re not going with a camber, the slightly convex road surface, higher in the middle and lower on the edges, which serves the useful purpose of helping water reach the side channels. I don’t know why; it might be a budget-breaker, or there might be a technical reason for not using it. I’m quite content with what we have and are getting, though. I don’t NEED the rustic look of a bumpy clay road in the village!

A vital step is the smoothing of the newly-poured concrete. This is done first by a machine-powered heavy steel bar apparatus moving its way slowly downhill, perpendicular to the road length. A man at each end of this is harnessed to it by strong straps, and together they pull to keep it straight. Other men do final smoothing by hand, one with a flat tool to which he adds long handles for extension. They do a few tens of meters at a time, dependent on number of men, amount of concrete and its drying time in the finally hot sun. The last finish gives fine horizontal lines, applied by a long-handled stiff brush.

We also will have to see how the road edges will be softened a bit from their current right-angle hardness and height above the softer and lower shoulders of the road. It will be necessary somehow to drive between the two surfaces when one meets another vehicle; the road mostly isn’t wide enough for two normal-width cars to pass one another easily without resorting to the shoulders, and we don’t want too much height difference when doing so.

Time will be the big tell, as far as long-term quality goes. The ravages of repeated winter melts and freezes can be hard on such roads, as the main road through Svaneti, of identical construction, bears out. Of course, that road also has to suffer rock fall bombardment from above, and much more and heavier traffic than ours. So we hope that its quality will suffice for many years to come. We HOPE.

My own eyes, untrained but still seeing, have observed in recent years brand new roads being laid, including asphalt, in certain larger mountain towns of Georgia, and ALREADY being ruined during the construction process, and roads a year old but already so potholed that their making was a complete waste of time and money. Asking one of our road guys here, I got the answer that they never should have used asphalt in such places, should have known that it would not work. 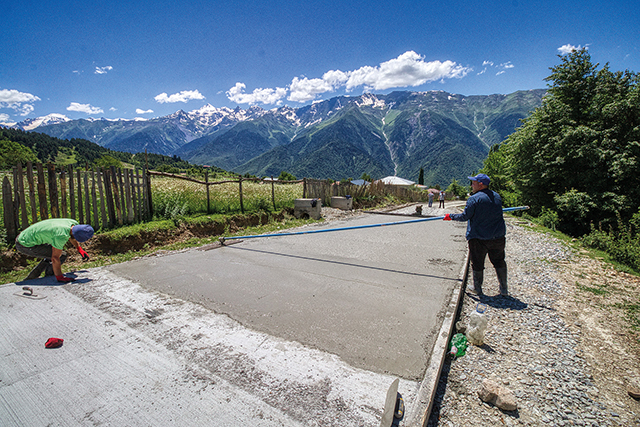 How much of the budget for these follies went sideways into the pockets of local politicians or work supervisors? The sight and experience of driving on these roads simply infuriated me; what must it be like for people who live there and have to use them daily? I dare not think that we will have such issues here; at least everyone knows that I record and write about such village infrastructure processes as I can firsthand. There must be accountability. They also tell me that concrete and rebar are a much better choice for our location; that the nice asphalt road through about 5 km of Becho was a mistake; and that our road should last 2-3 decades, barring catastrophes.

Anyway, here comes the road. Our concrete load will arrive within the hour, and I’ll be on hand for the photos. Then, you’ll be welcome for a smoother traveling experience than you will ever have had in Etseri.