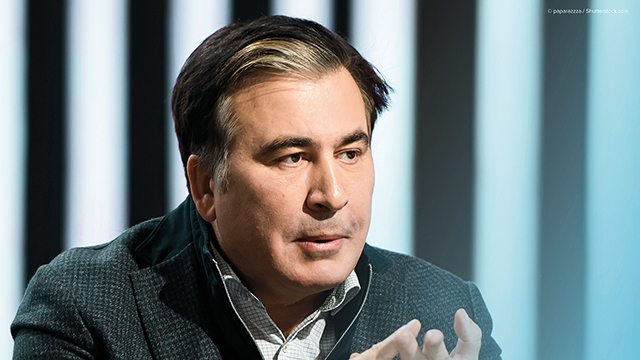 Prisoner Saakashvili is not at leisure, even with his situation forced on him by the state law enforcement system: he is at work, sweating to shore up the ideals he has been nursing since his salad years. He is politically active, morally exalted, ideologically poised, inherently confident and adherently supported. In his own days even Mandela, the notably incarcerated South African political activist and fighter for justice, was unable to enjoy spiritual and intellectual freedoms of this quality and number. Mikheil Saakashvili (or Misha, as he has been known for the last quarter of a century) is extensively infatuated with the epistolary genre, giving birth to handwritten political missives on an almost hourly basis. Spending time in a regular prison cell, he is trying to maintain the scale of his erstwhile presidential activity, which sounds a little weird for a convict, reminding one of historical revolutionary personalities like Lenin who used to formulate the theoretical prerequisites of prospective public upheavals in Russia from those memorable remote exiles of his.

Georgia’s imprisoned third president continues to be a genuinely organic leader of his political party even in the captivity he has imposed on his own self in hopes of momentarily triggering the national revolutionary stupor, conducive to overthrowing the current government overnight, which did not happen: he found himself instead in the penitentiary institution in which he once kept people who are now happy to see him sailing in the same boat.

This insatiable political animal and zealot of unquenchable thirst for power keeps on ticking even in his infirmity and waning hopes for a recurrent Rose Revolution and fast liberation. Misha wouldn’t stop even for the price of freedom. He cannot live without the warmth of the limelight. Nothing will kill him, even the worst of human maladies, except the silence around him. Misha needs to talk and be talked about. He wants the world to be his and to rotate around him. He has had his share of power and fame, but he needs more because his hunger for leadership is clearly ravenous and there is not an iota of chance for us to see him appeased except by the cherished political revanche churning in his boisterously operating mind and not giving a respite either to him or his desperately dedicated disciples.

Georgia has a furious political beast in the cage that would do anything in his lingering ideological power to get back to the helm of the republic. Saakashvili is not simple and he is not a wimp. Nor is he a quitter, but at the same time he reveals himself as a bungling promoter of impossible political projects, enticing his poor followers into believing that his slogans and battle-cries might someday come true.

Having said that, two questions pop up in the context of his dramatic saga from the presidential palace to the jail cell: First – why can’t he publicly recognize his regretful failures and tragic deviations and get done with it, thus creating a chance for a possible presidential clemency? Second – how long is the current Georgian government going to pamper one of its prisoners, making a questionably privileged inmate out of him in a noble attempt to keep up political correctness and human rights, at the same time irritating others who are doing time, as well as those who earlier tasted the effect of Misha’s infamously cruel law-enforcement methodology?

It is about time that somebody, either one of us or one of our western friends, came up with some highly qualified and internationally justified comment on what is right and what is wrong when it comes to a convict like a former president of the country: is the national law enforcement body obligated or not to meet every whim and caprice of an inmate of that caliber? Should the administration be feeling as vulnerable as it does right now, trembling over every flash of giddiness or occasional headache of one of its prisoners? Again, we are talking about doing the right thing at the right time so that nobody in the world has reason to doubt the fairness and correctness of the system that keeps Georgia’s ex-president Mikheil Saakashvili in detention.