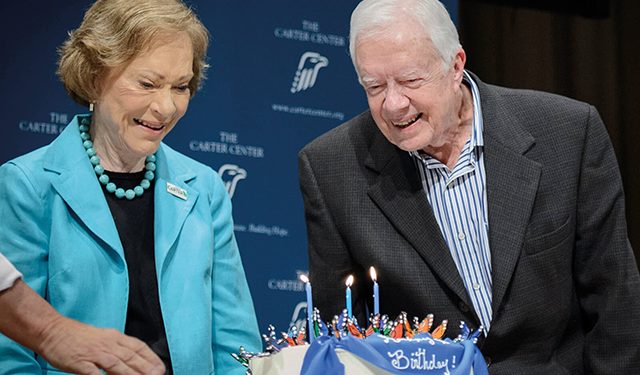 His famous thirty-two-teeth smile was all over America, if not the entire world, when he started campaigning for the most famous and influential job on the planet in the mid-1970s. ‘Jimmy Who?’ was the household question in his early campaign, for he had dashed into American summit-level politics right out of the blue at a time when the American people had not yet fully recovered from the Watergate fiasco, and when the Nixon-ridden Whitehouse was temporarily taken over by neither-fish-nor-flesh vice-president Ford. Jimmy presented himself to the expectant public as a peanut farmer, because he indeed owned a peanut farm, and by means of using that folksy image, he wanted to distinguish himself from the detested-at-that-time Washingtonian political elite.

Yes, we are talking about the 39th President of the United States, James Earl Carter Jr., the longest-living American president in history. This wonderful man turned 98 on the 1st of October, and I had no way to stand aside from the exceptional event. He is just two years short of officially acquiring the honorary appellation of a centenarian, and I have no doubt he will. Frankly, one of the reasons for my enthusiasm is that I spent time at Jimmy and Rosalynn Carter’s house at Plains, Georgia, together with my family, when I served as a soviet Georgian TV journalist in Atlanta in the late eighties and early nineties. I remember we had a lot of fun together. I even attended the Sunday school session led by President Carter, the ‘outspoken Christian’, as his grandson Jason (currently the head of the Carter Center board) describes him.

Being very happy with their personal life, public image and valuable legacy, Jimmy and Rosalynn Carter have spent 76 years in a loving and dedicated connubial relationship, working together ceaselessly on promoting democracy, peace, human rights and conflict resolution, monitoring elections, and advancing public health in the developing world. Based on what the family members are saying, they are at peace and happy with where they have been and where they are going. According to the Carter Center leaders, the aging but still optimistic and spirited president who survived a cancer diagnosis in 2015, is enjoying congratulatory messages from his well-wishers around the world, but he is mostly looking forward to a day that suggests watching on TV his favorite baseball team, the Atlanta Braves; he also reads and watches the news daily, and accepts calls or visits from political figures.

Says Jason Carter: “The people that he feels the closest connection with now are the folks in Plains, at his church and other places, but his partner number one, two and three is grandma; he has outlived friends, many of his advisers, and the people that he accomplished so much with in the past, but grandpa and grandma have never been lonely because they’ve always had each other.”

Isn’t this amazing! Having lived that great life of a famous and exemplary couple, having done so much to promote the state and public cause, having aged with that outstanding human dignity, the tight, tough and inseparable Carter couple are still working and doing their due job to the benefit of their family and their beloved country, when the man is 98 and the wife is 95. Congrats!