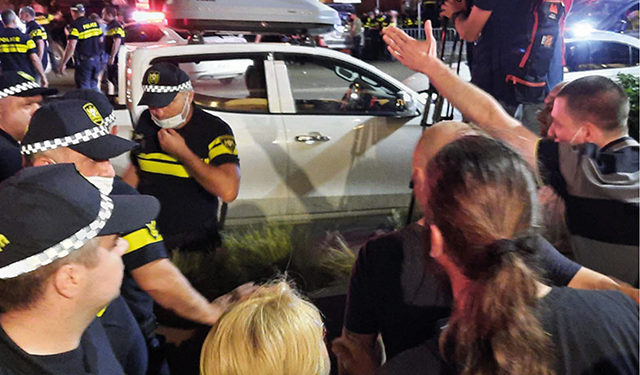 If you do not stop this destruction, not only me but the entire government team will stop communicating with you. You are simple abusers, – Georgian Prime Minister Irakli Garibashvili speaking to journalists

Few are unaware of the recent political division taking place, with the epicenter in the capital of Tbilisi. Some have sided with traditionalism and preservation of Georgia’s old ways, the purity of the Orthodox Church, and exclusion of those that wish to disturb that equilibrium. Others have pushed for social change, a movement towards a refined European image, and more progressive views on alternative lifestyles. Regardless of the social conflict happening on the ground, there are more severe penalties if this cultural warfare, as well as the political reactions, continue.

Georgia has many of the common state-level domestic concerns; education, infrastructure, workers’ rights, among others. However, these are not much different from any Western nations. What makes the internal situation here different is the socio-cultural split that has deepened in the past months, and some would argue even years. Georgia has always been stuck between the Eastern and Western worlds, but it is coming to a head right before the peoples’ eyes.

As a result of this, many outside observers have begun to take a more involved role in commenting and even reacting to the shift. Georgia’s enemies are included in this. Quietly, these enemies are making notes and planning on contingency schemes should the outcome lie in their diplomatic and political favor. The natural culprit in this is the Kremlin.

As has been stated before, Putin’s eye on the Black Sea and the South Caucasus have never truly wandered. Instability, even war, in the region has wetted his palate for conquest. This resulted in the eager deployment of “peacekeepers” into the Karabakh region, bolstering of the 102nd Military base and the 988th Anti-Aircraft Missile Regiment in the Armenian city of Gyumri, and the air elements at Erebuni Air Base outside Yerevan. It should be noted that his base houses multiple MiG-29 fighters, soon to be replaced with the new Su-30SM, and Mi-24 attack helicopters. It is also a base for Russia’s regional Unmanned Aerial Vehicle (UAV) program.

The instability in Georgia is slated to cause the Kremlin to focus even further on the politics in Tbilisi. With this division, it’s only natural that Putin will exploit this and drive the wedge further between the two polar entities. Doing this is not particularly difficult, as Russia is able to easily incite one side against the other and view them as a threat to the state. Europe is sadly an easy target, as they have had their own internal European Union problems on which to draw.

In times past, it was through blatant street-level propaganda, having to be implemented by planted individuals on the ground in the target area. Connections made, deals conducted, and money exchanged. Now with social media platforms, the ripe exploitation of those willing to drink the digital “kool-aid” of anti-Western ideology is all too easy. As more people begin to resent the move toward specific European values, such as acceptance, tolerance, and progressivism, they present themselves as targets of opportunity for the Russian information strategy.

Unity is an easy word to throw out in favor of bringing the nation together to combat a national enemy. However, it’s become apparent that many are not willing to see that enemy as the primary threat. In a move that seems to ignore the transgressions of the Kremlin in their own homeland, they have looked to them as something of a potential brother in the fight against what is largely a trivial social issue.

The lure of Russian information tactics online (or rather disinformation) is admittedly a tempting one. With Putin’s bait of reinforced cultural hyper-traditionalism, religious practice and values security, and the expungement of the perceived perversion of certain Western institutions, it’s a magnet for those seeking a return to the proverbial “good ole’ days.” Sadly, the displaced and disparaged citizens in Eastern Ukraine, Abkhazia, and South Ossetia would plead for those people to reconsider. That is, if they were allowed to speak freely.

Something the Kremlin is most assuredly displeased with is the inability to influence much of the press in Georgia. Just as a small child may destroy a toy, the philosophy of “if I can’t have it, neither can you” seems apparent. Subtle tactics aimed at removing the press’s credibility and reducing their reach and effectiveness have already taken place. From the nation’s own Prime Minister verbally attacking journalists, to a sitting minister aggressively stealing a microphone (a prosecutable criminal act under normal circumstances) from a reporter, the influences from abroad are clear.

Diplomats’ written and published condemnation letters have fallen on deaf ears, and largely have little effect, if any. Even statements from the United States Embassy in Tbilisi are mostly brushed off as a formality and go unheeded. The press, however, has been attempting to garner public support and raise awareness of these socio-political issues. The inability to seize this control is enraging to the politicians that seemingly, willing or unwilling, kneel to foreign (Russian) control.

Putin is not one to allow such alleged insubordination to go unchecked. His indirect and shadowy support of these initiatives to curb the press slowly erodes the ability of these free speech outlets to bolster the democratic institutions that still remain. With recent allegations of wiretapping and illegal monitoring of political opponents and media figures, It’s even more important now for free institutions and diplomats to step in as support.

This malfeasance by public officials weaponizing national security organizations, if confirmed to be true, will draw harsh criticism and negative consequences from Georgia’s allies. The United States has already stated that imposing sanctions are on the table and European Union officials have come out aggressively against recent actions of Parliament members.

However, it’s not too late for the nation. Georgia has so much promise and has displayed an ability to encourage stability and freedom for its people. As a few members of the government body continue to revert to Soviet-era behavior, it is tear-jerking to see the recidivism. Coalitions of people, the media, and Georgia’s allies must come to the assistance of a faltering but faithful friend. Georgia still deserves a chance, and still deserves a seat at the European Union and NATO table. Spoiling the proverbial side dish doesn’t spoil the whole entree.