The Mediterranean World at the Mercy of Geography 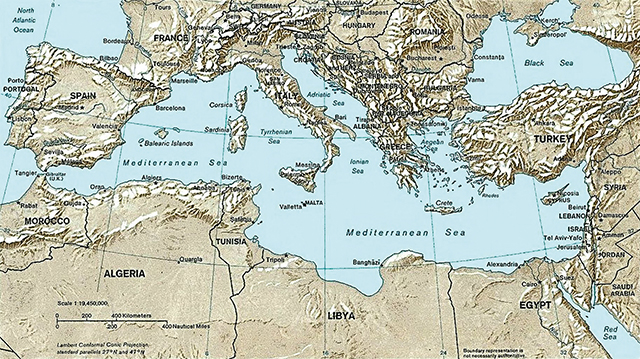 Continuing to discuss important geopolitical developments in the world with direct impact on Georgia, I wanted to have a look at the migration crisis in Europe. The crisis which followed the wars in Libya and Syria sparked debates in Europe on how to protect its southern borders and what could be done to resolve the Syrian and Libyan problems. This comes at a time when in the last several years, Georgia has moved ever closer in its history to the European Union. I will try to explain below that Europe will continue facing large migration tides from the Mediterranean and that potential migration from Georgia will only be dwarfed by the former.

What we see now in the Mediterranean world is essentially what has been lost in the region for centuries due to different political and economic systems which existed in the Middle East and North Africa on the one hand and the European continent on the other. Perhaps one way to explain the current process of reconnection in the Mediterranean world is to revisit its geography.

A look at the map of the region shows that although the Mediterranean Sea borders three continents (Europe, Asia, and Africa), it is essentially a closed sea with only minor outlets to the oceans, through the Gibraltar Strait and the Suez Canal. The Mediterranean is full of peninsulas and islands which give any power which controls them a chance to be a dominant maritime and economic power.

However, if we look further around the sea itself, one will notice that it is closed off from the heart of Africa, the rest of the Middle East, and Central and Northern Europe by powerful geographic barriers. In North Africa, it is the Saharan desert; in the Middle East it is the Syrian desert and the rugged land of the Anatolia along with the Euphrates River. In Europe, the Mediterranean is closed off by the powerful Alps, the Balkan mountainous territory and further afield the Rhine and the Danube rivers. As such, from a geographic perspective, North Africa belongs less to the rest of the African continent, there being barely any infrastructure or economic activity running through the Sahara, and is more influenced by the Mediterranean, most notably southern Europe.

The same applies to Syria which is cut from the rest of the Middle East by the desert stretching to Mesopotamia (modern Iraq) and the Arabian Peninsula. The only connection Syria has to the rest of the region is through the north of Iraq.

Yes, modern technologies and the world’s increased interconnectedness makes the Apennine, Balkan, and Pyrenees less of a barrier, but these geographic features are still there and throughout centuries have shaped the behavior of the Mediterranean peoples. The geography also integrated the above territories of the three continents into one economic space. And there are plenty of instances of how this played out over the millennia in the Mediterranean.

Take the example of the Phoenicians, who established colonies in Northern Africa and modern Spain and controlled many islands in the Mediterranean. This enabled the Phoenicians to create a veritable trade empire where all the colonies and territories they possessed were more related to each other than to inland territories of the Middle East and North Africa.

The same was done by the Greeks with their colonization of the Mediterranean and the Black Seas. Connectivity through the sea facilitated the creation of a trade empire, with metropoles in mainland Greece getting the most out of it economically.

However, Phoenicians, Greeks and later on Carthaginians did not have enough human resources to politically dominate the Mediterranean coastline. These seafaring peoples did not manage to shut off the Mediterranean from other rising powers.

And this brings us to the Romans. The Roman Empire was a perfect example of how the Mediterranean world was interconnected geographically. The Romans added to trade their military virtue and essentially closed off the sea to outside powers.

How geography dominated the Mediterranean world is explicitly shown in the extent of the conquest the Romans carried out. Roman legions did not go beyond the rich North African provinces deep into the heart of Africa, as the territories were not economically worth controlling. Caesar, August, Diocletian and other Roman leaders were also not particularly keen on capturing entire Germany, as the Rhine and Danube rivers were seen as good enough defensive barriers to rely on. The same can be said about the Middle East, where the Romans (barring some instances) did not think to permanently occupy the lands beyond the Euphrates River.

Connecting to the Modern Epoch
Thus, we see the Mediterranean world previously united. For the Phoenicians, Greeks and particularly the Romans, what was going on in North Africa and the Middle East was of major importance, as, economically and militarily, the lands were connected to one another.

The Arab conquests limited this connection. In the 7th c., North Africa and the Middle East came under Islam, while the rest of the Mediterranean remained Christian. Throughout the following centuries, economic and military developments in these regions varied, with cases (for instance, the Crusades) when clashes took place. Europe experienced industrialization in the 18th-19th cc., but the Middle East and North Africa lagged behind. European colonization, followed by two devastating world wars, again increased the connectedness of the Mediterranean world. The Germans and Italians were in Africa, while the British were defending themselves in Egypt. In short, it mattered to Europeans what happened in North Africa. But, again, the interconnectedness of the Mediterranean world diminished and has yet to be reignited.

Thus, although we live in a highly connected world with modern technologies, at times trumping geography, geographic features still play a powerful role in shaping human behavior. What we now see in the Mediterranean world with the migrant crisis is what has been happening in the region for centuries with varying intensity. Today, it has again become clear that Italy, Spain and Greece, although participating in the grand European project, the European Union, are nevertheless now very much linked to what could happen in North Africa and the Middle East.