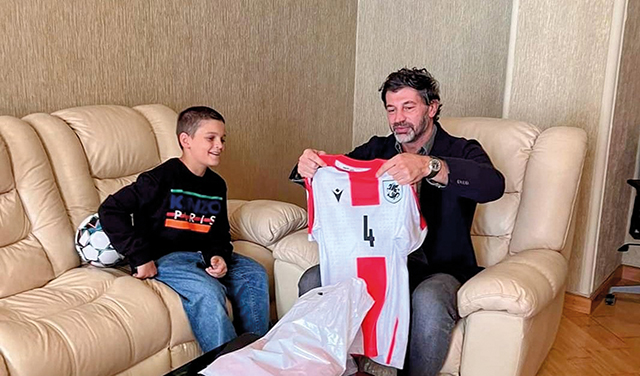 When all is OK and the overall sense of happiness within our societal tissue seems to be seamless and intact, nobody is morally ready to accept and digest a tragedy, and tragedy can strike at any point in time. The latest saddening event happened in Tbilisi, seeing a wonderful child die as a consequence of an outrageous accident, and it has had the heaviest bearing on all of us members of society, jerking us out of our habitual way of life.

The picture was routinely trivial: children were playing on the edge of the newly-renovated Vake Park fountain and dropped a ball into it, but, in trying to retrieve that ball out of the water, they were struck by electricity. One lost her life in her heroic attempt to save a friend. This is the briefest and plainest account of the excruciating disaster. Screams, tears and broken hearts eventuated at the internment of the beautiful girl, and will stay forever in our hearts and minds, though it is already in the past.

What lies before us, like a tornado, is the pressing necessity to solve the mystery of the event. Was it human error, a terrorist act, or providence turned cruel? Could it be all of these in one? Of all the tiring guesswork, one expansion has materialized most vividly, and that is the political witch-hunt. In cases like this, all cultures seem to head the same way, Georgia no exception: A scapegoat needs to be found and the shoulders to put the blame on provided as soon as possible, so that the nation and all its vivacious components can let the dust settle.

For the no longer vigorously fussing political opposition, woken up from their summer slumber and already readying for a winter hibernation, the overwhelming national tragedy played the role of a resuscitator. They then smelled out the fattest and the tastiest victim to dine on in the person of the current mayor of Tbilisi, known for his tireless struggle to rebuild the city as one of the most comfortable spots to live in the region, if not the world. A monstrous campaign has now been worked up against him, blaming him, just him, for what God sent to Georgia as one of the worst tribulations it has known of late. Our handsome, young, popular and uncannily industrious town leader is viciously being turned into a threat to our society and the destroyer of our best hopes.

Without further deliberation on the topic, I would like to raise a question: What does the political figure of the mayor of one of the most populous cities in the world have to do with a tragic death in the old, beautiful and salubrious Vake Park? If a city service, or any attached link to it, fail to do a good job, should the mayor’s head roll? If yes, let’s get done with it. But we, the electorate, have every right to know what is wrong here and what is right; the mayor’s resignation or his staying in power. There can’t be any in-between judgments here. The issue is so tremendous that it possibly deserves a referendum. And this is not about some mayor of some city losing some sinecure: This is about our and our children’s future. What is the correct way to continue living after this tragedy has taught us this terribly bitter lesson?

Concerning the advantage-taking politicians, I could assure them with reserved and reasonable enough confidence that the advantages seized the way they do will not pay off. Things like this do not constitute the competitive advantage they spend their lives looking for. A political advantage to find and use is not usually built on human tragedies. Human tragedies are only meant to be shared and alleviated, not used to grab political points or in order to push the current good mayor aside and take his place, while we, the electorate, have no clue at all if the new incumbent will do a better job for his city dwellers than the mayor we have now.