The Maro Makashvili Chamber Opens at the Georgian Parliament 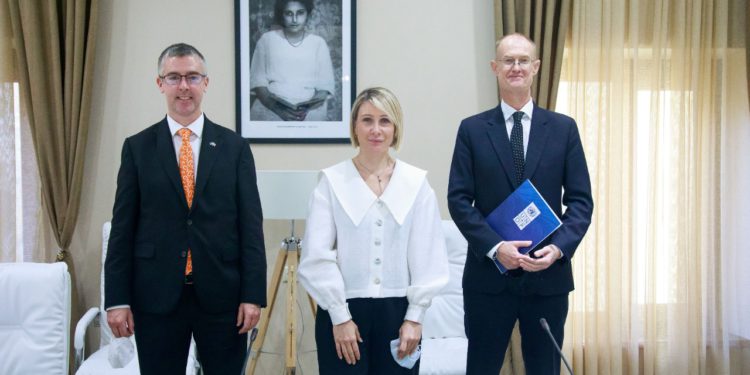 Maro Makashvili is a renowned freedom fighter who gave her life for Georgia’s independence during the 1921 war. The Parliament of Georgia honored this national icon by dedicating a chamber after her. The Maro Makashvili Chamber will host an exposition featuring women members of the Georgian Parliament throughout history.

It was renovated and equipped through the Parliament’s Gender Equality Council, with assistance from the Government of Sweden, the United Nations Development Program (UNDP) and UN Women.

Born into a noble family of well-known writers, Makashvili was a 19-year-old student at Tbilisi State University when the Red Army invaded Georgia in February 1921. She volunteered as a nurse and was sent to Kojori along with the Georgian Regiment, where she met her untimely death. From the 1920s to the present, artists, poets and composers and the Georgian public have memorialized and cherished her heroism, elevating her to a symbol of Georgia’s struggle for independence. In 2015, she became the first woman to be awarded the Georgian Order of National Hero.

Unit Manager for Human Rights, Gender Equality and Social Inclusion Lela Akiashvili and representatives of the Public Defender’s Office and civil society organizations delivered a seminar for youth about women’s political empowerment and their role in building democracy.

“Maro Makashvili is the first woman to be awarded the Georgian Order of National Hero. It is symbolic that Parliament now has a chamber named in her honor, which which will remain for generations. Maro Makashvili, who fought for Georgia’s independence, is a symbol of how to build a strong country,” said Kakhaber Kuchava.

“The names of courageous and talented Georgian women are written in history. Their struggle for equality, human rights, independence and freedom is inseparable from the development of Georgia. As we pay tribute to women heroes of the past, we also salute women leaders of the present who pave the way to achieving gender equality, protecting human rights and increasing women’s participation in Georgia’s political and economic life,” said Ambassador of Sweden Ulrik Tideström.

“Georgia’s history remembers many extraordinary women who shone like stars in public life. Yet women still have to struggle with gender stereotypes that lead to discrimination, gender-based violence and political and economic under-representation. As we acknowledge women’s roles in Georgia’s democratic development, we need to consolidate efforts and take concrete steps to create an equal environment for all citizens — women and men alike,” said UNDP Head Nick Beresford.

The Maro Makashvili Chamber was established under the auspices of the ongoing 16 Days of Activism Against Gender-Based Violence campaign. The event is also part of this year’s Human Rights Week that brings together UNDP’s local and international partners and wide circles of Georgia’s society. This includes the Government Administration, Parliament, the Public Defender’s Office, the European Union, UN agencies, the Government of Sweden, civil society organizations and international agencies.