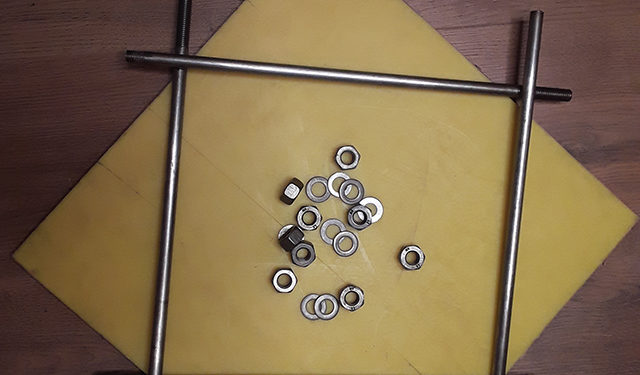 Writing this in a less painful moment, bracketed by the harrowing throb of perhaps an impacted wisdom tooth. I’m in Tbilisi, which for Georgia is the place to be to have such things dealt with, and tomorrow it comes out.

It has become time for me to restart making good cheese in Svaneti. On my last visit to Canada, nearly two years ago now, I found a fully illustrated guide to home-making gourmet cheeses for $3 secondhand. Now, despite an absence of our own cows (we’ll enlist the neighbors for the milk of theirs), I once again find myself longing for the cheese of my childhood and youth, rather expensive here as they’re all imported.

I still have my original 20 cm diameter cylindrical mold, and the cheesecloth and beeswax. But I never got around to making a good cheese press, an essential part of the process. I designed one and then found in the blessedly rich YouTube archives that my version was basically the main, common logical solution to the problem of allowing the weight to move only up and down: vertically constraining it. Now, here in the capital, I’ve visited the Eliava bazaar near Tsereteili Metro, home of all things mechanical, to stock up on exotic parts.

I wanted the whole press to be unable to rust: part plastic (the upper and lower boards) and part stainless steel (the rods which bolt to the lower board and, fixed there, allow the upper board to move only as required). I needed thicker plastic than the kitchen cutting boards one can buy in a home supply shop. Also, the rods must have a thread cut into only one end, to take the bolts and washers, and otherwise be smooth: so, no easy use of ubiquitous all-threaded bolts!

Following the instructions of an American friend who’s lived here nearly as long as I have and makes a lot of things by hand, I wandered through Eliava until I found this special place. Here, in one shop, I found all the parts I’ve described above, along with much more. Stainless steel, brass, copper, aluminum, tin, parts in many shapes and sizes. Sheet plastic from about 1mm to 2 cm thick, as well as solid cylinders as long as you need them. He makes bespoke furniture as well, advertising his work with photos on the walls. Nothing cheap, but when you’re the only, or the best, you won’t be cheap. I spent about 240 GEL for my pieces, including cutting the boards (160 GEL to buy, the biggest part) and the rods and their threads. I did buy a bit bigger than I’ll need, but the excess can always be cut off, whereas if something were too small you could never properly add anything.

It was most satisfying to see these decades-old, CCCP (USSR)-stamped machines which can be used to cut, drill, saw, trim, lathe any shape you want: machines which make parts for other machines. As long as I knew exactly what I wanted, and could describe it properly, and had the time (about an hour) and the money, all doors were open. Need a custom roof-rack for your vehicle? Metal grills for windows, filigreed as fancy as you can dream up? A shish kabob grill-box (which I also use for smoking food)? These are the 3 most popular choices. Mine is a little different, but no one even asked me what the parts were for.

It’s a 100% male world, and no-one uses any ear protection, although they will wear safety eye-goggles and gloves. So I’m afraid the constant high-level noise will rob them all of their hearing, as it did my father in his engineering work. But I have given up trying to persuade a single man to simply put on ear-covers, including my best friends here and in Svaneti. It’s just not cool, or something. No-one follows my example, but it can’t be helped.

I’ll take the boards to my friend’s to have the holes drilled and polish the surfaces nice and smooth. Then, back home in the mountains, I’ll really be ready to make my own cheese, once I sort out stable temperature and humidity conditions (using an old air conditioner and humidifier). Just for my wife, me, and the guest house, and an occasional gift to any neighbor who won’t turn up their nose at the unfamiliar flavor. Not a commercial production, but that’s fine. As the Russians say, and the Americans too, you gotta live!