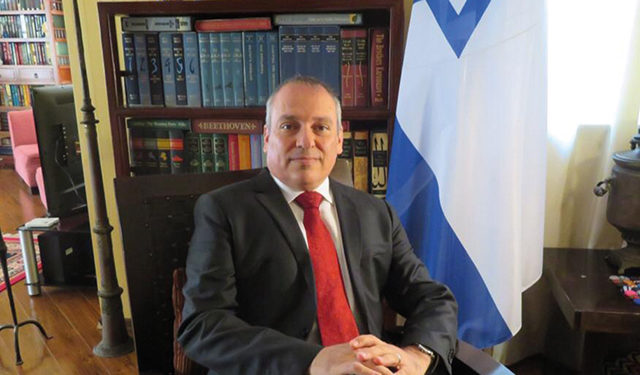 Israel has been much in the news of late- from a controversial ICC decision, to a revolutionary new COVID vaccine and accusations of anti-Semitism in Georgia. We sat down with Ambassador of Israel to Georgia, Ran Gidor, to get his take on things.

At the beginning of February, Israel rejected the decision of the International Criminal Court on jurisdiction in the Palestinian case. Please tell us more about that decision, and Israel’s reaction.

The ICC Pre-Trial Chamber’s decision that the Prosecutor has jurisdiction in the Palestinian case is deeply flawed, and confirms Israel’s long-standing concerns that the Court may be susceptible to politicization. The ICC was established following the horrors of the Holocaust, to deal with the worst cases of mass atrocities that shock the conscience of humanity, and with cases that could not be addressed within any other framework. It only has authority over cases where States choose to delegate their own criminal jurisdiction to the Court.

The Court wholly lacks jurisdiction over the so-called “situation in Palestine”. The Rome Statute clearly stipulates that the Court only has jurisdiction in cases brought before it by sovereign states; a sovereign Palestinian State does not exist, and never has. Despite these facts, the ICC’s Pre-Trial Chamber ruled that The Hague has the jurisdiction to investigate Israel.

One can only imagine how Georgian public opinion would react if the so called “governments” of Abkhazia and South Ossetia were to be recognized as sovereign states by the ICC and, indeed, launched a criminal investigation against Georgia itself.

Unfortunately, two judges came to this decision on the basis of political considerations rather than judicial ones. In fact, it was for these very reasons that the Presiding Judge himself, Judge Péter Kovács’, opposed the majority opinion of the Pre-Trial Chamber. In his highly critical dissenting opinion, he stated that the majority’s approach has “no legal basis in the Rome Statute, and even less so in international law”, and that “acrobatics with provisions of the Statute cannot mask legal reality”.

It is worth noting that the dissenting opinion reflects the official positions of seven leading states’ parties of the Court, such as Germany, Austria, Australia, Brazil, the Czech Republic, Hungary and Uganda, as well as world renowned international law experts, which were submitted to the Court in the framework of these proceedings.

The ICC’s latest decision has turned the Court into a political tool, diverted it from its original mandate and undermined the values for which it was established. It is still not too late to shift course to the right path however, and the responsibility for doing so rests on the shoulders of the Prosecutor, who enjoys full discretion on this matter.

Israel, as a country traditionally well-known for its great achievements in the medical field, recently announced the creation of an innovative drug against coronavirus, EXO-CD24, showing 96% efficacy in early trials. What is the latest on that?

Israeli scientists have so far achieved dramatic results in the clinical trials of two potential anti-COVID-19 drugs: EXO-CD24 and Allocetra.

EXO-CD24, developed at Tel Aviv Sourasky Medical Center, and administered by inhalation, cured all 30 moderate-to-severe cases in a Phase I clinical trial. The drug is designed to tackle the so-called “cytokine storm,” where the immune system goes out of control and starts attacking healthy cells, that occurs in the lungs of 5-7% of Covid-19 patients. The drug is based on exosomes [vesicles] that are released from the cell membrane and used for intercellular communication. It is enriched the exosomes with 24CD protein. This protein is expressed on the surface of the cell and has a known and important role in regulating the immune system.

Concurrently, Enlivex Therapeutics also reported positive results from a multi-center Phase II clinical trial of its experimental COVID-19 immunotherapy drug Allocetra in severe and critical COVID-19 patients. Nine severe and seven critical COVID-19 patients were treated with Allocetra in the Phase II clinical trial. Fourteen of them recovered and were discharged from the hospital after an average of 5.3 days. The Phase II trial originally was expected to enroll 24 patients but was “completed early in support of anticipated accelerated regulatory filings of the trial’s positive safety and efficacy data,” Enlivex reported.

Altogether, 19 out of 21 Phase II and Phase Ib Allocetra trial patients recovered and were discharged from the hospital after an average of 5.6 days. Most of the patients in both studies had pre-existing risk factors such as male gender, obesity and hypertension.

Early January, you spoke about anti-Semitism in Georgia, a country that is regularly marketed for its tolerance and hospitality. Tell us what prompted you to make that statement and how you think we can/should change.

One would not like to exaggerate the current scale of this objectionable and tragic phenomenon, as Georgia has always had less anti-Semitism than almost any other country in the world. Jews have existed in Georgia for over two millennia, and are still welcomed here as guests and neighbors. However, by the same token, it is important not to pretend that the issue doesn’t exist at all, otherwise, it might get out of hand in the future.

Unfortunately, xenophobia, racism, anti-Semitism and homophobia are on the rise in many countries around the world, and in recent years we have witnessed some violent attacks on Jews even in the US, UK, France and Germany.

It is therefore essential to address the problem and nip it in the bud. In order to be able to do that, first we need to acknowledge that it exists. Then we need an inter-disciplinary, cross-departmental approach that would involve education, outreach campaigns, inter-faith dialogue and, when needed, law enforcement.

Tell us your views on the current political crisis in Georgia. What are your concerns and hopes moving forward?

Israel joins the rest of the international community in hoping that Georgia will emerge out of its current political impasse in the near future. We support the process of peaceful dialogue between the relevant sides, and trust that Georgia will soon re-embark on the road to prosperity. Israel has always been a close ally of Georgia, and will continue to support it in agricultural development, high-tech and entrepreneurship, investment and commerce, and public health.