The Graveyard of Empires and NATO’s Exit from Afghanistan 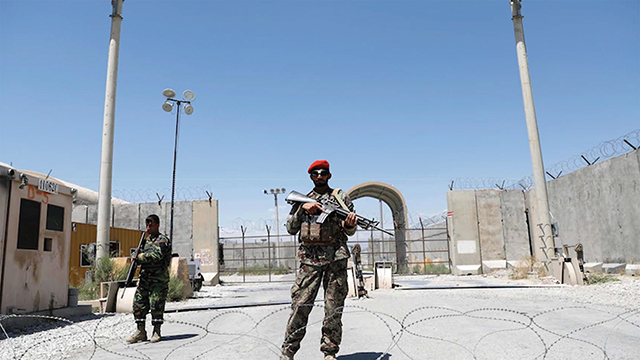 As NATO begins the withdrawal from Afghanistan, many of those that spent months and years of their lives in its mountains and valleys look back on the abandonment of the larger mission. Politicians, soldiers, even private contracting employees, largely see it as a worthwhile mission to stall the global terrorism threat and force it to fight a ground war that it cannot possibly win. By draining their resources, it is a tactic that has pulled most of the vast litany of organizations collectively known as the Taliban out of the shadows and onto the battlefield.
However, after 20 years of warfare, the United States and the NATO coalition have opted for a withdrawal. This withdrawal, supported by most civilian and non-military political elites, has drawn criticism from those in the defense and global security sectors. NATO’s combined mission of combatting terrorism and maintaining a Central Asian foothold has been framed to be a “forever war” that had no conclusive end and no defined objective. As this is not the case, the withdrawal of forces will have immense repercussions not only for the region, but the globe.
The status in Afghanistan had reached a level of relative calm compared to the initial phases of the conflict. People had comparative economic freedom, women had achieved a level of near-equivalence in society compared to their male counterparts, and the majority of the combat and death had subsided to a point that NATO casualties were reduced to single digits per year. Hardly something to be considered a war.
Ensuring peace, stability, and positive growth in a nation is something that takes decades. In fact, this is visible in the modern era. In the aftermath of both the Second World War and the Korean War, nations were devastated and civilian populations left with little more than rubble and flames. With the presence and support of Allied soldiers and the injection of resources into their crippled nations, South Korea and Germany were able to become the economic successes they are today.
After the Korean War, thousands of American and United Nations soldiers remained in the nation, and some are still there today. Even after the war, the South Korean government was largely seen as a military dictatorship. It required decades of growth and development, some assistance coming from foreign governments, to gain the social and economic successes that are visible today. Despite this, elements of the United States Army numbering over 20,000 are still stationed in the country, as the North Korean threat persists. This positioning with a key ally is vital to ensuring stability in the region and dissuading any North Korean attack.
Similarly, in Germany after the Second World War ended, thousands of Allied soldiers remained in the nation. Despite popular images of a mass exodus and a grand homecoming of troops, many remained behind to ensure stability and facilitate a reconstruction of security and industry. On a larger scale, the Marshall plan was implemented, investing over $13 billion dollars (valued at approximately $114 billion today) in European reconstruction and commercial industries. Like Korea, United States troops inhabit multiple military installations to this day in Germany, Poland, Italy, and various other smaller positions across Europe.
These examples display the safety and security that is provided by the presence of NATO nations in destroyed countries. The subsequent influx of economic and social resources ensures that the nation involved has a rigid growth framework and reduces its recidivism into terror and mayhem. As time has shown, where NATO boots go the grass grows green.
However, when these boots leave prematurely, it allows for a total collapse of this framework. As the final moments of American and allied forces in Vietnam displayed, the exit of forces before a nation can stand on its own has terrifying repercussions. Thousands of South Vietnamese attempted, at all costs, to evacuate the country and escape the onslaught of North Vietnamese communist troops. Additional civilians and South Vietnamese soldiers were killed in the action that ensued.
Similar events seem to be on the horizon for much of the Afghan population and military. With the exit of NATO troops, already many civilians are attempting to vacate the country. Those that worked faithfully and diligently with NATO forces in the field and on their bases are fearing for their lives and are filing for visas. The Afghan security forces have largely been seen as unready to assume the role NATO once held and effectively combat the enemy.
Opposing them, the Taliban group of organizations are already taking steps to seize the moment and the inevitable power vacuum. Given the most probable occurrence of the buckling of the Afghan government, the assumption of power by the Taliban and their leadership will undoubtedly plunge the nation back into its dark era of Islamic extremist rule. This descent, coupled with the degradation of human rights and any semblance of democracy, can only fuel a resurgence of terrorism.

In addition to this fallout, many of those that served in the embattled country feel that their time spent, as well as comrades lost, were wasted. In discussions with some of the United States veterans of the conflict, the feeling of having their work reversed so radically has left them feeling disparaged and deflated:
Sergeant Mykle Shaulis, 10th Mountain Division, Afghanistan 2006-2007: “…We did a lot of work trying to help stabilize the local areas. Now that it’s all gone I feel like it was for nothing and that hurts the soul a little bit.”
Specialist Joshua Powell, 101st Airborne Division, Afghanistan 2010-2011: “I don’t think they’re prepared at all. They lack the national pride, honor, and integrity needed to defend their country against terrorist organizations. A lot of them are corrupt and will take whoever gives them money, including the Taliban.”
Staff Sergeant James Czekalski, 1st Armored Division, Afghanistan 2012-2013, US Department of Defense Contractor, Afghanistan 2017-2020: “I don’t think they’re prepared at all [to be honest]. So many districts have already fallen at hands of the Taliban. We should’ve spent the last couple years doing with the [Afghan National Army] what we did with the Iraqi army for training…That being said, it’s ultimately up to their government on if they want our help or not. We shouldn’t be imposing our beliefs on them.”
Despite this sentiment, the proverbial die has been cast by NATO leadership as to the future of the Afghan nation. Already, videos, albeit still unconfirmed, have surfaced of Afghan soldiers and their special operations elements attempting to surrender only to be gunned down. While the videos are harrowing, it shows that the recent attempt by the Taliban to display itself as a responsible government entity is false. The deaths of these soldiers do not ultimately lie on the Taliban, but rather on the NATO commanders who ordered the retreat.
In addition to the surrender of national control to a radical and terrorist organization, the regional concerns will pressure powers like Russia and most importantly China to rethink how they operate in Central Asia. With the Chinese already operating in some capacity, private military corporation or military deployment, in Tajikistan as a border protection force, it’s only a matter of time until this tactic spreads. Neither Russia nor China want this Islamic extremist entity to grow beyond Afghanistan, as it has attempted to do in the recent past. However, the politics of NATO have seemingly already spoken.
While it is all too easy to dismiss a foreign conflict or peacekeeping operations as too expensive or too wasteful, is it another issue to surrender not only a region but also sacrifice thousands of people’s livelihoods for the sake of political expediency. NATO, through its development in the post-Cold War era, not only works as a force for good against the Russian threat, but also for its allies and friendly nations. This includes Afghanistan. The people of this troubled and now overrun nation deserve the protection and guarantee of stability that Germany and South Korea received, and continue to receive to this day.
For Georgia, it should be of concern for the families of the 32 soldiers killed and the 280 wounded in action. This price Georgia paid for NATO is not just a testament to their commitment to the organization, but also proof that the mission cannot be abandoned. It is not on Georgia to take on the defense and security mission in Afghanistan solely, but opposition to a premature withdrawal must be sounded. NATO, with Georgia included, cannot allow the sacrifice of so many and the collapse of an otherwise friendly nation’s fledgling democracy to go silently.