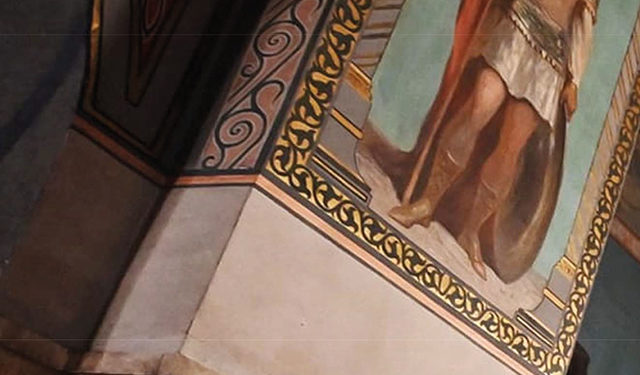 While dozens of journalists were getting brutally attacked by a lynch mob of religious anti-LGBTQ extremists on July 5, the Georgian Orthodox Church was churning out Kremlin-esque nationalist propaganda to galvanize an already violent mob.

“Forget about no violence. You are obligated to be violent. For your homeland. For your country. For holiness,” a priest from the church roared at a crowd gathered in front of the parliament building in Georgia’s capital city of Tbilisi, where a protest against Pride celebrations was taking place. This was nothing short of a battle cry.

The Georgian republic was founded on “Western” aspirations, and year after year, support for Georgia’s EU and NATO aspirations polls around 75%. But at the same time, trust in the Georgian Orthodox Church polls just as well, despite fanatical bishops vying for the throne of the 88-year-old patriarch miring the Church in scandals and intrigue, including allegations of sexual abuse and a murder plot involving cyanide.

This is where Moscow sees an opportunity. Though Russia continues to consume Georgian territory, the 2008 war was a relative failure. So, the Kremlin has pivoted to information warfare, and the Georgian Orthodox Church and its followers are a prime target.

Russian disinformation campaigns have long been carried out through proxy Georgian language outlets and public figures masquerading as the sole guardians of Georgian traditional values, spirituality, and patriotism. Their goal? To create panic that the US and EU are waging a war against Orthodox Christianity, and that only Putin can guarantee Georgia’s territorial integrity and national identity.

The messaging of these campaigns is often as revealing as it is bizarre. Take the claims that people who live under dictatorial regimes like that of Syria are happier, that NATO-member Turkey is the real threat to Georgian territory, that life was better during the Soviet Union, that Russia has a new superweapon which gives it military superiority, and that “experimental vaccines are tested on Georgians,” in the US-run Luger Lab, a fixation of Russian media as well.

It’s no wonder that Georgians are confused and angry. Facts, such as Russia’s creeping annexation of Georgian territory, have been dismissed as arbitrary and irrelevant.

The controversial “journalist” Jaba Khubua made a claim in the Asaval-Dasavali newspaper in 2018 that sums up the Kremlin’s disinformation messaging in Georgia: “During the tenure of [US] Ambassador Ian Kelly in Georgia, the propaganda of anti-national, liberast, homosexual ideology and pro-drug abuse movement reached unimaginable scales, pursuing the ultimate aim of moral and physical genocide of the Georgian nation.”

When the mob of Orthodox “Christians” tore down the EU flag in front of Parliament and stabbed a Polish tourist on July 5, it became evident that this was about more than media freedom and LGBTQ+ rights. The same increasingly fundamentalist religious order that claims to defend Georgia’s national identity had undermined its secular democracy, and the efficacy of those Russian disinformation campaigns was on full display.

But something else was as well. The Georgian Orthodox church has successfully exploited the anger and desperation of those hurting most from Georgia’s faltering economy, particularly in the wake of COVID-19. Georgia is now ranked 20th globally in cases per million. The church has converted rage from Georgia’s economic woes into the same creed of ultra-nationalism and “family purity” that Alexander Dugin brought to the Kremlin.

The Kremlin calls it Eurasianism. The message is as simple as it is historically absurd: Pan-Europeanism and Christianity are mutually exclusive, and as such, the EU is exporting homosexuality. With this false dichotomy, the Georgian government has been conned, and is now systematically refusing to protect minorities or to rein in the religious leaders who call for violence against them. It is a repeating cycle that has only grown worse.

On July 11, one of the battered journalists, cameraman Aleksandre Lashkarava, died. Thousands poured into the streets. They gathered in front of the same parliament building where the EU flag had been torn down the week before and demanded the resignation of the Prime Minister Irakli Garibashvili. He refused.

Soon after, US State Department spokesman Ned Price announced that they were monitoring the situation closely and confirmed that sanctions “for human rights abuses” were a possibility. For a country that is often lauded as a beacon of democratic leadership and reform in the region, this is an astonishing setback.

On the day of the mob attacks, PM Garibashvili made the conscious decision that a minority of his constituents were not worth protecting, despite being provided the capability to do so by the US. Instead, the Prime Minister belligerently claimed without evidence that Pride was organized by the “radical opposition,” along with the former Georgian president.

The Georgian people are fiercely independent. Their country has been invaded by every empire worth its salt. Georgia’s spirit of independence is the reason that it remains free. This is the great irony of the events on July 5: Those attempting to defend Georgia’s national identity and freedom do the bidding of those who want to take it away.

Op-Ed by Will Cathcart, for The Daily Beast

First published on The Daily Beast.