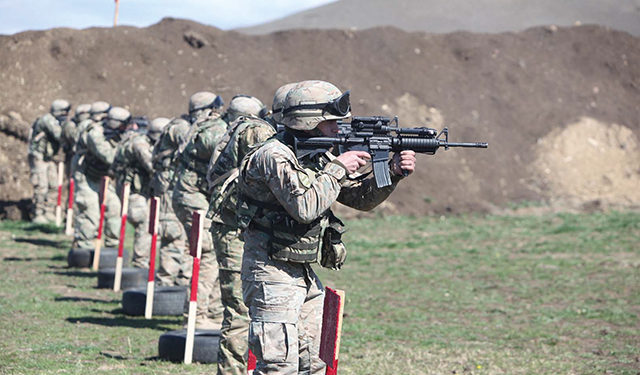 The quality of a nation’s defense forces is quite simply the quality of the individual service members that make up the force. While some may say that quantity has a quality all its own, true soldier quality is a far more sustainable means of security. This all begins at the recruiting offices across the country’s major cities. As young men and women complete their studies, a select few choose to commit themselves to a life of discipline, regimentation, and camaraderie, one that will stay with them for a lifetime.

Finding the most suitable candidates for membership in this organization has always been a challenge for any military force. Competing with the likes of universities and trade school institutions, the armed forces has its talent acquisition work cut out for them. As an additional handicap, the Georgian military still retains some of the same negative stigmas that many Eastern and post-Soviet armies have been forced to combat.

For many, particularly the parents of prospective recruits, the image of the army and the idea of sending their beloved child into its ranks is terrifying. Brutal hazing rituals, unsafe training practices, and inadequate living and eating conditions typical of the Soviet-era military have stained the name of army life for decades. This is particularly true for those parents and older family members who were conscripted and forced to serve in these deplorable conditions in decades past.

This is not true of the modern and near-future army. As it comes parallel with their European and American partners, the Georgian military is a far more developed and professional force. From training and facilities to individual equipment and technologies, the soldier of 2021 is now the polar opposite of the soldier of the Georgian Soviet Socialist Republic. These young men and women are professionals, technically and tactically proficient.

However, this cutting edge of training and technology is pushing further, and modern warfare has become far more of an advanced science. This requires a more complex breed of soldier, and a more adept warfighter. No longer can they afford to simply fill uniforms with bodies, and this demands that recruiting officers take additional steps to draw from Georgia’s academic and technologically affluent communities.

To accomplish this, there must be a monumental shift from an industrial age vision of military recruitment to a digital age model of talent acquisition and placement. In addition to the long overdue need to abolish conscription, a rebranding of the military’s image in the eyes of the civilian community must rival, or even compliment, career prospects in science, technology, engineering and mathematics (STEM) fields.

Whereas soldiers were once viewed and placed purely based on a military job position, the need to modernize this approach to in-processing lies with the first steps. As potential military training candidates find themselves with a litany of careers offered by the armed forces, maximizing their potential not only helps them develop professionally, but optimizes that particular area of the military. Initial assessments that take into account and measure these unique skills and inclinations can give military career advisors and placement specialists insights into how best to apply the recruit.

This method of assessment is not particularly new, and is still being revolutionized in other Western nations. One of the more popular examples is the United States Army’s notorious sequence of tests known as the Armed Services Vocational Aptitude Battery (ASVAB). The ASVAB contains nine timed sections that not only determines the suitability of an individual for the armed forces, but also what branch of the armed forces, and what jobs in that branch they are the best fit for.

These nine tests generate several different scores that each encompass a particular facet of the individual’s capabilities. These capabilities cover fields such as communications, electronics, combatives, and advanced technical skills. From these quantified skill sets, the candidate is offered a selection of potential positions that best fit their natural cognitive abilities. While no test is always going to perfectly match a person to the exact match, it has historically placed many of the right candidates to the correct military occupational specialties or MOS.

For the Georgian military, a similar scaled approach to having candidates examined can greatly maximize these natural inclinations. An intensive and extensive battery of tests offered to both prospective candidates and as a free resource for students could allow for the discovery of potential positions of work within the Ministry of Defense. Shifting the stigma of a career course for the otherwise incapable to something of a path of honor, dignity, and elevation, this would help mold the idea that service is its own category of higher learning.

Learning a trade or technical skill through the military, even the “soft” skills of leadership and personal discipline, are immensely valuable to employers. Should an individual find that long term career service in the military is not in line with their life plans, they may still be able to utilize their skills to great effect in the private sector. This not only aids local businesses in their endeavors but grows the Georgian talent pool as well as the national economy on a larger scale.

Branding the defense forces as less of an obligation and rigorous path that must be taken, but more of a privilege is a less discussed facet of the continuing Westernization project. NATO needs to know that when Georgia sends their forces to take part in an operation, these are men and women that possess the same or greater technical and tactical knowledge base of other professional partner forces.
Rebranding the careers in the armed forces, or at the least a career beginning in the armed forces, is a significant task. As seen in many Western nations, militaries continually update and modernize their marketing approach to stay on par with the private sector and the trends in recruitment and hiring.

Displaying the value of military service is imperative, as well as painting it as something that is parallel or competitive to university or workforce job fields.

This can be done in a wide variety of ways. School and community events with the aim of developing closer links between the people to their defense forces have been met with warm receptions in the United States and United Kingdom. This effort can paint the military as an honorable and character-developing beginning for young men and women entering adulthood, particularly when many of these young people may be still conflicted as to which career field they wish to pursue.

As stated, the modern day Georgian soldier is a proud representation of the nation’s finest. At the same time, it is still imperative to trim the proverbial fat of the unnecessary, the outdated, and the impractical. Starting with the abolishment of the conscription component, a scholastic approach to recruit examination and vetting, and a warmer marketing strategy the armed forces can begin to anticipate the inevitable technological curve in the near-future style of modern warfare and global stability operations.