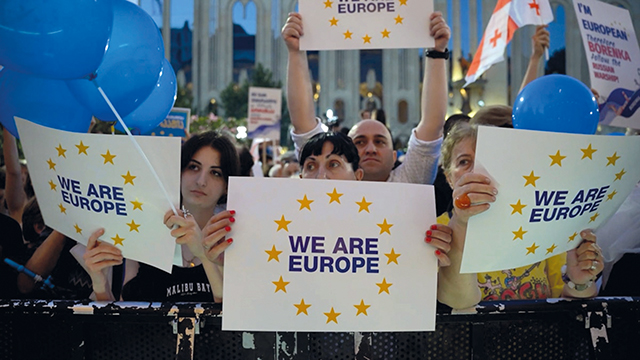 Liberal democracy is good, but not an overdose of the stuff, by which I refer to the current political processes in Georgia, which are sickening by the day.

In the wake of the European Union’s exclusion of Georgia from the famous trio of Union candidates, certain problems and difficulties have occurred in the field of interaction within the country’s political spectrum, as miscellaneous and shaky as it has been in the last 30-something years.

When the exaltedly expectant Georgia was shown a red flag on the way to its EU membership candidacy, the national frustration became truly universal and vividly sincere. The people, especially the West-stricken part, took to the streets to tell the world that Georgia belongs only in Europe and nowhere else, in a rally at least a 100,000-strong, spontaneous and overwhelming as never before; peaceful, balanced and full of benevolence between the participants, as well as towards those who thought that Ukraine and Moldova deserved to be living and developing in the vicinity of Europe, but Georgia as yet did not.

The crowd was unrecognizably young, not terribly politically-minded, but was elevated in spirit and mind. There was something noticeably true and frank in the whole thing. No anger, no irritation, and not even a vestige of inveighing against each other. The overall sociopolitical sentiment of the rally could be described in words like: ‘Here we are, the good people of Georgia, who want and deserve to be among you, our precious Europeans.’

That was June 20. The all-national outing continued on the 24th, and, as if by the wave of a magic wand, everything changed. The routinely familiar faces of politicians started appearing to carry on pushing their never-changing cause: the toppling of the current ruling power. The get-together thus became that familiar 30-year shout-and-scream about ousting the government and bringing in one that could “do a better job.” The sound and smell of the event became so much rubberstamped in old style and so arduous that the disgruntled crowd began to dwindle away, mumbling under their noses their dissatisfaction with that customary practice, seen many times before, and that exhaustion began to permeate the demonstration.

And right out of the blue, somebody among the overexcited and furious crowd of the oppositional forces came up with an outrageously unconstitutional proposal to create a provisional technical government, the only function of which would be to lead Georgia in the next six months towards candidacy for the European Union membership, denying this pleasant opportunity to the current government of the country.

OK, let’s assume that this overly presumptuous suggestion is possible, even if it goes against the grain of the main law of the land. Let me first present the questions that popped up as soon as the preposterous scheme was suggested: Who might be the members of that unlikely government? Who will nominate the presumable members? Who will approve them? Who will give them the necessary legitimacy? Under whose responsibility will they be given the public mandate? Why should this odd group of parvenus be trusted by the powers that be in Europe?

Europe doesn’t even want to take it seriously and comment on it! And, finally, why should the legally elected Government of Georgia leave the arena so unassumingly and lay the red carpet for this eccentrically created bunch of wannabes who simply cannot and will not become a gonnabe bunch without the will of the majority of the country’s electorate? Are these bizarre players in the political game suggesting we abrogate the extant electoral system and substitute it with something new, without the consent of the majority of the Georgian people? Is there on earth any reasonable way to explain the political voluntarism of this magnitude?

What amazes me most of all is that there are hot heads in this land who are capable of conceiving such weird thoughts as this, and not just that: They are capable of pushing these ideas into the national agenda for further consideration and approval, and the sick attempt is to be continued at the next rally on July 3. I can understand exaggerations in general, but not ones of this enormity. Very openly, thoughtfully and honestly I say: Enough is truly enough!