The Day of David the Builder 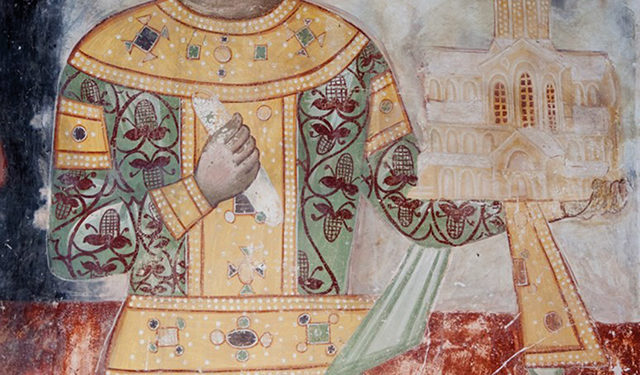 On January 26 (February 8 in the new style) the day commemorating the great political figure of Georgia, King David IV “the Builder” (1073-1125) is celebrated. The 12th century saw Georgia politically united and achieving great success, and is otherwise known as the country’s “Golden Age.”

During that Golden Age, the state of Georgia expanded significantly – from Nikopsia to Daruband and from Ossetia to Aragats. King David took care of political, economic, cultural, ecclesiastical, military, and judicial advancements, making Georgia the strongest state in the Middle East.

Georgian kings are known by various nick-names: the Fool, the Small, the Devoted, the Brilliant, the Bad-tempered, etc., and yet David was the only one in the history of Georgia to be honored with the title “The Builder.” As king of the country, “he flourished and built; he was God-fearing and God-loving; he was merciful to the poor, widows and orphans; he was helper of the sick; the builder of churches and hospitals…” (Batonishvili Vakhushti, Description of the Kingdom of Georgia, Life of Kartli, IV, Tbilisi, 1973, p. 163).

From the 1080s, he, as king, was able to mobilize a fragmented population, defeat the enemy, and set the country on the path of reconstruction. This was followed by great transformations, among them political, economic, and cultural revivals. Of particular importance was the founding of the Gelati Academy in 1106. David IV, was thus recognized as a builder by his contemporaries and descendants, and was canonized, with January 26 (February 8) set as the day of his remembrance.

King David took measures to centralize and strengthen the country: In 1110, he took control over Samshvilde, 1115 – Rustavi, 1117 – Kish, and 1118 – Lori Fortress. In 1118-19, he settled the Kipchaks and grew the army. On August 12, 1121, he achieved the greatest victory at Didgori – defeating a strong coalition army of Muslims. The subjugation of the old capital of Georgia and other cities was, in fact, a continuation of the Battle of Didgori: “In the second year (1122), the King took the city of Tbilisi. By the first war, it had been under the rule of the Persians for four hundred years, and David thus took it and established it as a household and a house for his children forever.” (Life of Kartli, Tbilisi, 2008, p. 326).

After the Battle of Didgori, almost all the lands of the South Caucasus, international trade routes, and cities came within the borders of Georgia. The government, in its religious policy, pursued the principle of freedom of religion – tolerance of law, which was very unusual for that period. David the Builder liberated Shirvan (1123) and Ani (1124). His actions “calmed the country … filled and rebuilt everyone.”

The king’s writings includes his original work “the Canon of Repentance,” which is a medieval cultural, aesthetic, ideological belief, and at the same time is a monument expressing Christian human sorrow. The multifaceted events carried out by David the Builder (also known as “King of the Abkhazians, Georgians, Rans, Kakhs, Armenians, Sharvansha and Shahansha”) contributed to the success of Georgia and made it an internationally recognized state.

2023 marks the 950th anniversary of the birth of the great Georgian politician, the “Sword of Messiah,” King David IV the Builder. I deeply believe that this date will be celebrated with dignity by Georgian society, government and relevant agencies, our Orthodox Apostolic Church, and everything will be done to see the anniversary of David the Builder widely celebrated around the world.

BLOG by Roin Metreveli, Vice-President of the Georgian National Academy of Sciences, Academician