The Dangers of Having A “Dark Hole” in Central Asia 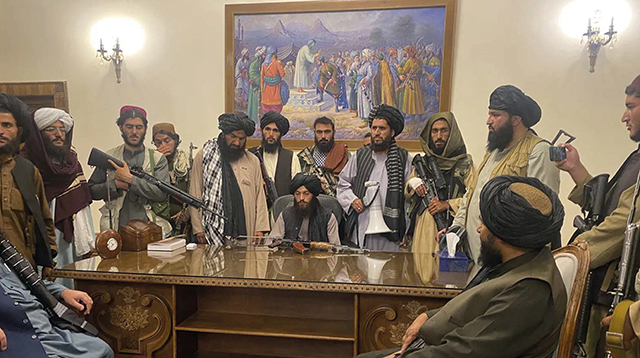 Taliban militants and leadership hold a meeting in a government office after seizing power. Photo by Zabi Karimi/AP

With the complete departure of NATO forces from Afghanistan last month, the expected bedlam has ensued in the fledgling nation. Reports of kidnappings, executions, and a litany of other human rights violations have already hit the headlines. With the absence of any semblance of law and order, the Central Asian country is now quickly becoming the world’s latest nightmare; a “dark hole” socially, militarily, politically, and economically.

Famed military officer and businessman Eeben Barlow recently framed the term “dark hole” as a place where there is no legitimate governance and a vacuum of power or influence. It is a place where one, with enough popular support, combined with an armed militant wing, can carve out one’s own kingdom. Just like distinct places in Africa and, until recently, locations in Southeast Asia, these places become virtual petri dishes of black market and underground business. From drugs and illegal weapons sales to human trafficking, these cesspits are the bane of the free world.

The long and short term effects of this are often obvious, but some remain obscure to all but the discerning eye. While the assumption that Afghanistan will revert to its pre-2001 invasion chaos is quickly becoming a reality, the treatment of the local citizens living there and foreigners abandoned there is also rapidly deteriorating. Proper law enforcement and emergency services are no longer available to the people needing them and essential social services are non-existent, as the resources and funds these organizations once had have been usurped by the new Taliban “leadership.”

It’s clear that the Taliban have no statecraft nor national leadership or management capabilities, being a long-time terrorist organization. Their attempt to prop up a veneer of legitimacy to the world community is cause for mockery, however, not everyone is laughing. China has already stepped forward to begin diplomatic discussions with the Taliban and their key figures. Given their proximity and shared border, this could be dismissed as simply an attempt to reach an understanding regarding these matters. However, given the nature of Afghanistan as a “dark hole” that just so happens to have a wide array of natural resources, China is clearly edging in to ensure that the rights to those settle squarely within their purview. The ensuing flow of capital and infrastructure support programs will be designed to keep the Taliban-controlled country in economic slavery to China. The combination of these two initiatives will pull the Central Asian nation under full control of the Chinese Communist Party (CCP).

Given China’s lack of interest in preventing the spread of the dark hole’s effects on the nation and region, particularly with regard to human rights, it’s doubtful they will take any position on the Taliban’s domestic operations. Since their involvement is purely centered around financial control and manipulation, the usefulness of the Taliban and the Afghan people is only viewed in this context. However, any outside involvement from the United States or NATO will be seen as a threat against Chinese financial interests, locking out the opportunity for the West to assist the plagued nation.

In addition, having any clear intelligence picture of the social situation in Afghanistan will be increasingly difficult with the Chinese curtain pulled over. Both the Taliban and the CCP are well documented for censorship, cover-ups, and the ruthless silencing of dissenting parties and opposition. The prospect of the West to get any idea of the eroding conditions, and thus calculate the need for any sort of humanitarian mission, will be fading with each day these two malevolent entities remain in partnership.

However, it can be noted that the Taliban is also not renowned for its reliability with foreign relations. Whether or not China realizes the immense unreliability of the Taliban is yet to be seen. They have repeatedly, with both local and foreign entities, displayed their propensity for erratic relationships and willingness to undercut those attempting to work with them. The Taliban’s only real concern is their self-preservation, be it at the cost of the people, economy, rule of law, or stability of regional security.

Given the reins of a sovereign nation, the Taliban will not be able to orchestrate any coherent grand national strategy. This, paired with a political-social disconnect and virtually non-existent progressive economic pathway, will become the fuel that only grows Afghanistan as a dark hole. As the Taliban cultivates this dark hole, their purposively devised side effects, which Barlow describes as “incompetence, corruption, factionalism, nepotism, racism, xenophobia, unchecked looting of state coffers along with numerous other ‘let’s enrich ourselves while we can’ reasons” will be in full swing.

Other less-than-reputable organizations will see Afghanistan as a haven, and the Taliban as a potential growth partner. Upon agreeing to the Taliban’s “rent rules,” the new terrorist and criminal organizations will have the resources, training area, and additional personnel to carry out their more grandiose plans. It should be clear that these organizations are not known for their adherence to product quality regulation or observance of safe environmental protection practices.

Sadly, the future prospects for the nation of Afghanistan and its neighbors is beginning to look bleak. Already, many of the people remaining in the country are attempting a mass exodus, albeit with pushback from the Taliban. Violence in the streets, rampant abuse, public executions, and the installation of war criminals to positions of high public office are beginning to characterize life in the new Afghan republic. All the while, China is turning a blind eye to these factors in favor of the new revenue stream.

While the United States and NATO remain a force for good, that good can only be implemented with a firm presence and support framework in place. Abandoning the nation to recede into a dark hole could not have come at a worse time, since China is more than ready to fill that void as a foreign partner and financier. NATO has left themselves with little viable recourse, and virtually no possible way to reverse their decision in the long term.

Unfortunately, many of the remaining short-term options will require military intervention before any social, cultural and humanitarian aid can be delivered. The unpalatability of another large military operation in the country is likely to draw an immense amount of criticism from already notable detractors. Diplomacy with a terrorist organization is unlikely to produce anything of value for either NATO or the people they are seeking to assist.

With a dark hole now growing in Central Asia, the regional and global security picture will begin to diminish and the threat of terrorism will return. With the new found resources recovered from American military technology and subsequently sold to China and Iran, the ability for the Taliban and their associates to regain worldwide reach is bound to return. Chinese investment and partnership has the potential to establish some air of legitimacy so desperately sought by the Taliban in their new position.

Time is running out for the forces for good in the world to plug this dark hole and initiate the cessation of the decay of the world order. NATO, the EU, the United States, and other global actors both private and public are the saving grace the world needs. The global community cannot recede into the cold void of terrorism and instability again. These world leaders absolutely must, by charge of their office, right this wrong and ensure the safety and security of not only the Afghan citizens but also the people of every free nation on the planet.