The Dangers of Appeasement Tactics with Tskhinvali & the Kremlin 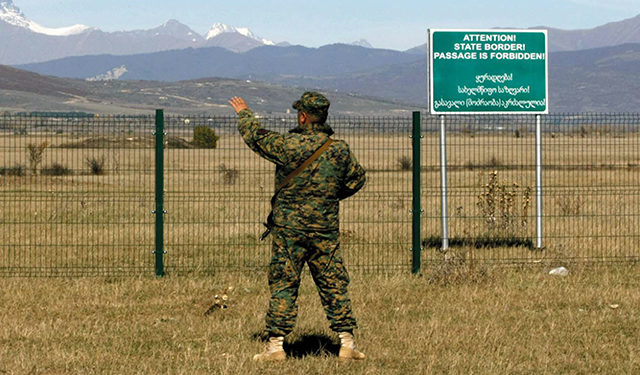 “If we do not talk about the arrests of Georgian citizens in Sukhumi and Tskhinvali, these people will be forgotten.” – Elene Khoshtaria

On July 11, 2020, Zaza Gakheladze left his home in the small village of Kvemo Chala in the morning to gather mushrooms. His search led him into the nearby hills where they grew in abundance. Somewhere near the ruins of the 14th century castle ‘Skhvilo,’ once a proud home to the powerful Georgian Amilakhvari family, he was taken. While the specific details of the abduction are uncertain, one thing is clear: Zaza was taken against his will, illegally and with extreme force.

At some point in the fray, Zaza suffered a gunshot wound to one of his legs. While not fatal, it was most certainly unwarranted, as the man faced several heavily armed and equipped Russian military personnel. The Russian puppet-government in Tskhinvali claimed their border units were fired upon several times with a hunting rifle and responded with a wounding shot. Despite the absurdity of Russian occupation forces exercising this type of restraint, witnesses, including his family that saw him leave, stated he had no rifle; no weapon at all, in fact. 11 months later, on February 5, 2021, a so-called “court” sentenced him to 12 years and 6 months’ imprisonment, his crimes being listed as illegally crossing a border, and attempted murder of a military service-member.

Clearly, there are obvious legal issues in the case; that of there not being any actual border to cross, and “attempted murder” against an illegally invading army- generally not something you prosecute. However, this isn’t the first time Russian puppets have played these games in their self-declared micro-kingdoms. A multitude of locals in the region have fallen prey to these thugs in the mountains, and Tbilisi has been tame in its response.

While the Georgian government has raised the issues with the European Union, the United States, the United Kingdom, as well as the Russian Federation themselves, little has come but repeated cries for his release, something the Kremlin and Tskhinvali are both unlikely to heed. The only solutions these hybrid political-criminal organizations will respond to is economic and social warfare.

Sadly, for years, the people of South Ossetia and Abkhazia have suffered under the boot of Russian-backed oppression. Inadequate utility services, poor economic and social development, and unserviced infrastructure, have brought the two to their knees. Now with COVID19 running rampant with no support from their so-called “protectors”, the Russian Federation, if not in the socio-political interest of the Georgian government, something must at least be done for the humanitarian interests of the people living in these stricken provinces.

As the ancient Kartli would ride with lance and sword in hand, this modern threat must be met with cyberwarfare and counter-information tactics.

But what measures should be taken is the most complicated issue at hand not just for these regions, but the Black Sea commandship and Europe as a whole. Games of appeasement have been the go-to stratagem in the frozen conflict with the Kremlin. It’s beyond time that the EU, NATO, and most importantly the Georgian government began to squeeze the vice on Russian interests in the region.

Subversion through social media and electronic methods have proven their effectiveness. These methods should be aimed to mobilize the people in these oppressed regions against their captors. The Russians are masters of misinformation, and the creators of the original “fake news.” As a result, the only recourse is countering with unabridged truth. Fostering an informed people and culture of civil disobedience within these areas is imperative. There is little Russians detest more than those who wrong-think.

To affirm this and provide a bastion of support, the Georgian government should (and should have done so a long time ago) establish strong military positions along the Russian-erected fence line. The Georgian government’s rationale of “instigation” be damned: The best way to make a sneaky and conniving enemy back down is by countering with visible defensive brawn. Regular infantry and rapid response units should be visibly on patrol, armored vehicles and all. A message of “incursions will be met with force” should be promulgated to the furthest extent. Not dissimilar to the missions carried out in Kosovo, EU and NATO units should not only be encouraged, but required to participate in assignments. Just like the US military currently on rotation in the country, NATO partner forces should hold to their word of standing by Georgia’s territorial sovereignty by placing bilateral combatready units alongside Georgian peacekeeping units on patrol.

Appeasement is not a fruitful strategy, and this tactic only feeds Russia’s false ego as a mighty nation in control of Eastern Europe and Central Asia. This is a mask they wear over their crippling infrastructure, the inability to control their own internal dissidents, and inadequate, undertrained, afraid, and untested military. The time has long since come for Brussels, Washington D.C., London, and most importantly Tbilisi, to deny the paper bear. Like the 14th century castle ‘Skhvilo’ still watching over the mountain passes, build a bastion of hope and freedom against Russian oppression that lasts for centuries. Avenge Zaza, and the four other Georgians still held illegally by the criminal bandit-government: Lasha Hetereli, Ramaz Begeluri, Irakli Bebuia, and Gennady Bestaev.

It’s imperative for not only the rule of just law and human rights, but for the pursuit of the God-given freedom of Man that this oppression be banished. The Russian threat has stood at the door for too long, and feeding it just enough to stay in its den is not enough. It must be vanquished, but in the modern sense. As the ancient Kartli would ride with lance and sword in hand, this modern threat must be met with cyberwarfare and counter-information tactics. The general on the field has been replaced with the decisions of parliament. Tbilisi will need to muster their digital forces to do what is right.