The Coming Storm or Losing Steam? 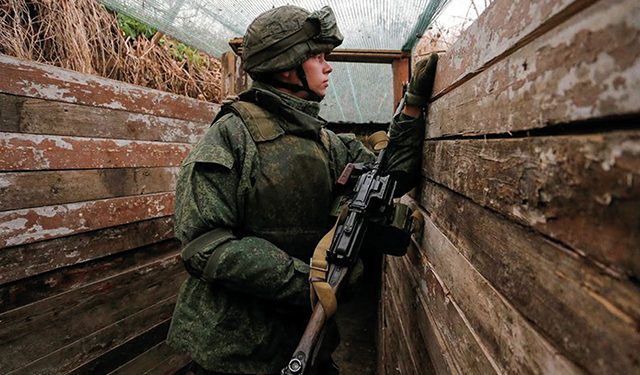 A militant of the self-proclaimed Donetsk People's Republic (DNR) watches from a frontline position. By Alexander Ermochenko/ REUTERS

As Russia’s “special military operation” continues with a focus in eastern Ukraine, both sides have traded small slivers of territory for immense cost. With casualties mounting, logistics strained, and equipment being either destroyed or captured, commanders are looking for any opportunity to exploit an opening. Many observers have begun to describe the combat as largely an artillery duel, with each side resorting to shelling the other.

Both sides have raised concerns of the sustainability of this grinding campaign. Ukrainian President Volodymyr Zelensky admitted to the Kyiv Post that “Every 24 hours, 60 to 100 Ukrainian soldiers are being killed in combat, and around 500 are injured.” Supporting this, several videos released on social media show Ukrainian defenders taking heavy fire while attempting to evacuate large numbers of wounded in civilian vehicles. The recent capture of two high-profile Americans, both former American military, made the problem even more poignant.

Russia has not been spared the carnage. While their numbers have been more difficult to discern, several reports have shed light on the invasion force’s woes. Russian soldiers on the front are facing significant morale and supply issues. Ukrainian intelligence reports detailed instances of Russian commanders refusing to risk men and vehicles to resupply their forward deployed troops. An Institute for the Study of War report said the Russian military was being forced to concentrate all its efforts in single attacks rather than multi-prong assaults.

This buildup of tension and frustration, combined with pressure from senior leaders from Kyiv and Moscow, is likely to result in one of two outcomes. The first is an all-out attempt to climatically bring the conflict to some form of “victory.” The second is a long, protracted conflict not dissimilar to that seen after the 2014 invasion, albeit with far more weapons to bear and much more at stake.

The first “coming storm” would likely be in the form of a mass combined assault. While Ukraine has significant combat strength and has made large gains in the south near Kherson lately, this type of operation would likely be done by Russian forces. It would have little regard for man or machine, and would simply aim at a WWII-esque display of raw power to gain territory. This terrifying possibility, while difficult to fathom, could be in the early stages of preparation now.

Multiple reports from the Russian interior have signaled that disparity is beginning to set in. Recruiting offices have resorted to “salesman” techniques to meet high quotas. Exorbitant bonuses, promises of glory in battle, and a lofty pension upon returning from Ukraine have been promised to young men across the Russian Federation. While recruitment officers even in Western countries have been criticized for their tactics, the Russian model sets a new low bar.

According to Ukrainian intelligence analysis, Russian recruitment has pushed their numbers to near unreal limits. Quotas of approximately 200 young men a week are being pressed on the recruitment officers in Russia’s far eastern and Siberian provinces.

The popular encrypted messaging and social media app “Telegram” has been an uncommon source for many disillusioned Russian volunteers to explain the dire situation. Young Russian men have shared information that the military is attempting to press men using not only money, but at times violence and threats to make their quotas. The German news outlet Spiegel said one Russian volunteer said that he received a letter asking him to report for service. He ignored the notice, saying “”I know how many of our boys are dying in Ukraine. They only lie on the television.” The young man stated he was offered 300,000 Rubles a month to serve in Ukraine, an astronomical military salary of over $5,300. When he refused, citing family issues and the sickness of his parents, he was threatened and forced to write a statement outlining why he was refusing service in the “special military operation for the protection of the Donbas.”

The second potential outcome for the hostilities is no less horrific. The aforementioned surge of recruitment of Russian men and equipment into Ukraine could alternatively lead to a faltered assault and prolonged conflict. This revisiting of a situation from The Great War pits two titans against each other in a long, bloody, and taxing war. Economically, socially, culturally, politically, and of course militarily, this would ruin both sides in the long term.

However, some European leaders have already reckoned with this possibility. British Prime Minister Boris Johnson stated that the NATO alliance, and the West at large, needs to prepare for this long war scenario. Upon returning from a visit in Kyiv, Ukraine, he stated, “Time is now the vital factor. Everything will depend on whether Ukraine can strengthen its ability to defend its soil faster than Russia can renew its capacity to attack. Our task is to enlist time on Ukraine’s side.”

As Ukraine fights to keep its sovereignty and national identity, NATO support will be the primary item that keeps these afloat. While Ukraine has displayed significant resolve, tactical prowess, and an ability to adapt, time is a factor that Kyiv must contend with. The Kremlin is using this temporal tool to grind down the opposition and to isolate Ukraine from the West, painting them as an inefficient expense on the global economy.

Conversely, Kyiv is betting that it can bring Russia down on the battlefield through attrition and from within. Discontent in the federation is well documented on social media and in open sources online. “No to War” or “Нет войне!” the White-Blue-White flag, and various deserting military and police personnel have become the symbol of resistance to the war in Ukraine.

According to open source intelligence, approximately 3,980 Russian servicemen have refused to fight in Ukraine. Of particular note is that this number does not include irregular, police, National Guard (Rosgvardia), and South Ossetian units that have returned home rather than serve in the warzone. This growing anti-war movement could put Moscow in a non-win scenario. With Russian President Vladimir Putin unlikely to lose face by pulling out from the war, the idea of a long war becomes too real.

NATO has signaled their willingness to support Ukraine’s efforts against Russia. “We must prepare for the fact that it could take years. We must not let up in supporting Ukraine, even if the costs are high, not only for military support, also because of rising energy and food prices,” NATO Secretary General Jens Stoltenberg announced. This influx of material and munitions will likely keep Ukraine from being overrun, but will fuel the trench-like long war as well.

While both options lead to a huge cost in life and destruction, it is likely only one will be the outcome the two sides face. Not unlike the old model of Mutually Assured Destruction, or MAD, the two combatants will have to find a solution to this increasing fatigue of war. NATO, Ukraine, and Russia will need to decide on a “forever war” or a climactic crescendo. Both will shape European security, society, and geopolitics for decades to come.