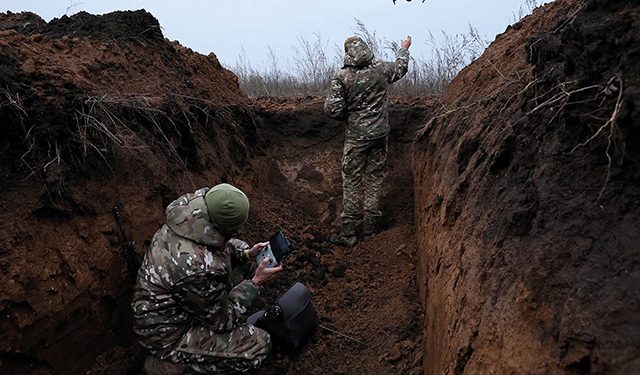 Two soldiers with the 58th Independent Motorized Infantry Brigade of the Ukrainian army release a drone on the outskirts of Bakhmut. Photo by Leah Millis/Reuters

Matched only by the Siege of Mariupol in its sheer brutality and casualty count, the fight over the otherwise small and unassuming city of Bakhmut may be one of the largest and most prolonged urban assaults of the war. Launched in early august with a withering Russian artillery barrage, the city has become the epitome of the Donbas front in Ukraine. Now, both sides have built up their positions, and each predicts their own victory.

But what has confused analysts and observers of the war is the geography of Bakhmut. The quaint city seems to have little to no strategic value, and only a local economic impact. Many online have been vocal about this confusion, scratching their heads as to why both sides would commit so much human life, equipment, and strategic resources to such an endeavor.

The answer may lie buried in layers of both history and geographical nuance. Aside from the simple mission to stop the Russian advance, Ukraine has made the city into a castle of sorts, flowing in units from the recently secured Kherson region. On the other side, Russia has moved units from other fronts as well, including Kherson, to the area to bolster its assault units.

The city of Bakhmut grew in the Imperial Russian era due to its industry and bountiful salt mines. Under the Soviet Union, the city was renamed after a Bolshvik hero, becoming Artyomovsk. Interestingly, Russian forces still refer to the city by this name. However, following the collapse of the Soviet Union and efforts under Kyiv to remove many of the USSR’s remnants, the city’s old name was restored in 2016.

The city was also contested during the first Russian incursion in 2014, with pro-Russian militants taking the city but losing it shortly after. Since then, the Donetsk People’s Republic still claims it as their city, with little to no recognition of this outside Donetsk or Moscow. Before the 2022 invasion, the city had a robust economy and boasted a population of over 73,000.

Bakhmut began being shelled in May, forcing a significant portion of that population to flee. Estimates after the attacks hovered at around 20,000 civilians, until the fighting came closer and casualties mounted so that almost all of them finally abandoned their homes. The mayor of the city has more recently estimated that around 90% of the population has either fled west, left the country, or has perished in the hail of Russian bombs. Open source estimates put the number of Russian forces concentrated around the city at about 30,000, one of the largest in the entire eastern front.

Now, as the buildup of men and equipment continues at a staggering rate, the violence in the region has begun a crescendo. On November 27 and 28, units from the infamous Wagner PMC group, together with militiamen from the Donetsk and Lugansk People’s Republics (DPR and LPR respectively), began to storm some of the small villages and towns just south of the city.

Pro-Russian accounts on social media have lauded the moves as the first steps towards an encirclement of Bakhmut. Much like Russian forces did to Mariupol, the obvious objective is to cut supplies and reinforcements from entering the city, then ‘choke’ the defenders to surrender or death. One popular pro-Russian military blogger wrote online that “in general, a detour south of Artyomovsk continues to emerge, which, in the event of movement towards Chasov Yar [a Ukrainian city 17km west], could create serious operational difficulties for the Armed Forces of Ukraine. The Armed Forces of Ukraine in these battles suffer heavy losses.”

However, other Western sources are not so sure this is a realistic possibility. Washington D.C.-based Institute for the Study of War (ISW) says this is highly unlikely, and “even if Russian forces have indeed succeeded in taking control of settlements south of Bakhmut, these gains do not threaten the critical T0513 (Bakhmut-Siversk) and T0504 (Bakhmut-Kostyantynivka) routes that serve as major Ukrainian ground lines of communication (GLOCs) into Bakhmut.” The ISW adds that “in order to advance any further, [Russian troops] would have to cross three kilometers of fields with little cover and concealment. Russian troops, in their current degraded state, are likely unable to be able to accomplish this task quickly.”

But this Western perspective may be overlooking why this is even an important objective at all. Analysts at Forbes even claimed that “Russia is wasting its last good soldiers in a futile attack” on the city. A city that, they and many other Western military and OSINT experts say, has virtually no military importance. While its value for salt production may have made it a jewel in centuries past, it is just another small city today.

So the question persists – why Bakhmut? Even if the roads that run through it have some value as supply and troop movement corridors, the network in the region could circumvent the area entirely. The answer lies with the very troops being sent to take the city.

Despite the various DPR and LPR militia battalions that are operating in the area, the largest percentage of the pro-Russian warfighters come from Wagner PMC. Infamous for their brutal treatment of civilians, captured Ukrainians troops, and even their own men, this private military corporation (PMC) is the brainchild of Yevgeny Prigozhin, one of the most well known in Russian President Vladimir Putin’s inner circle.

Recruiting from the Russian prison system, he has stocked the front with anyone who can carry a rifle, regardless of their ability to survive in combat. Ukrainian drone footage circulating on social media has shown fields outside the city littered with their dead, a testament to their ruthless ‘human wave’ approach to war. However, forcing the military to rely heavily on their numbers increases Prigozhin’s value to Putin.

As Russia’s military industrial complex is crippled from more than 9 months of war, someone will have to fill Putin’s void in this respect. Prigozhin, who some have said is even eyeing to fill Putin’s post, could use something like a victory in Bakhmut as leverage to inch closer to the throne. With Russia’s military leadership having been soundly beaten on three fronts (Kyiv, Kharkiv, and Kherson), even one small and strategically unimportant victory at the city would be worth gold in propaganda to the PMC commander.

With the numbers piling on both sides, the stage is set for the next major battle of the war. Even if it is simply a vanity project for a mad businessman turned mercenary commander, Bakhmut’s weight is also important to the Ukrainian troops who have fallen in its defense. The Battle of Bakhmut will not go down as a pivotal strategic event, but as a symbol of Russian futility, greed, and desperation.