The Agreement Signed: A Way Ahead for Georgia 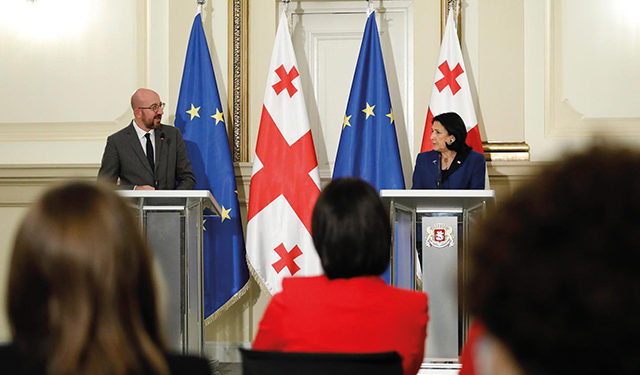 Being euphoric has never been part of my nature, but this time I have a tremendous reason to feel elated. Had this happened in Georgia in the early 1990s, we would have been much better off today, but as it seems now, it was impossible for it to materialize in those roaring times, the reason being our political culture, with zero chance of civilized negotiations between opposing political forces. Incidentally, the absence of the necessary political civility then was what ultimately resulted in Georgia’s sociopolitical and economic breakdown and the loss of many precious lands. Moreover, the recovery of that tragic loss and the reclaiming of our historical territories is presently quite unfeasible.

I’m talking about this week’s signing of the act of reconciliation between the current ruling power and its multifaceted opposition, minus the most craven part of the oppositional bunch who refused to join the signatories but did a little better later. The highly valuable historic document, diligently prepared and persistently promoted by the European Council, is titled ‘A Way Ahead for Georgia.’ Without an iota of exaggeration, there is a lot of good in it for this nation.

Political polarization is not the biggest news in Georgia, because we’ve seen worse ideological fallouts here in the last thirty years, but the one we’ve been experiencing in the last six months put the country on the verge of a total fiasco. The language of hatred and venomous assaults in the Georgian political realm have been commonplace political behavior since the demise of socialism, but now, when the 21st century is moving into its maturity with totally altered human thoughts, goals and priorities, our image in the eyes of the world began to deteriorate at a very fast pace.

But look at our good luck! The West all of a sudden demonstrated unbelievable good will towards our nation and the sincerest readiness to help out the Georgian people, when hope of rectification had already gone awry, seeing us almost catapulted from the Euro-Atlantic orbit! It is so good to know that both Europe and America want to save the day for Georgia. On the other hand, I was surprised at their level of endurance and tolerance towards us. I have never in my long life watched a scene of the immensity we all witnessed last Monday evening, when in his virtual but overwhelming presence, the President of the European Council himself, and in their heedful attendance, the American and the European Union Ambassadors, Georgia was able to celebrate an end to the tormenting political controversy and the beginning of a peaceful era of hope and new democratic development, all this happening at the presidential palace in Tbilisi under the aegis of Georgia’s sitting President.

Well, it is also true that not all the nine gentlemen and two ladies, the actual signatories to the famous document, were willing to at least greet the Georgian President as the host of that magnificent event, but that’s OK, considering the excitement and the chance to ignore protocol. Frankly, I wasn’t terribly surprised. The selfsame signatories didn’t even congratulate each other with the cherished triumphant finale to the long acid story of a painfully prolonged political squabble. After thirty years of travelling along the bumpy roads of progress, suffering the egregious paucity of a proper political culture, we can certainly hope that the protocol formalities will soon be no problem in this part of the world. As a matter of fact, nothing really matters here as much as the achieved bottom-line, which in the first place is the newly reappeared chance to maintain the empathy and support of our western brethren, as well as the freshly acquired feeling that it is our people that need the politicians’ shoulder and hand, not vice-versa, as it has been perpetuated in our young and faltering democracy. Without our people being taken care of, any political move and gesture is not even worth a nickel. This is what the West has prompted us to with her adamant support and brilliant piece of mind.