“I don’t consider Pride Week expedient. There are specific groups that may misuse it, on both sides,” Tbilisi Mayor Kakha Kaladze told reporters this week, noting that he believes freedom of expression is protected in the country.

“Years ago, we passed an important law, based on which everyone is equal and everyone has the opportunity to express themselves. Freedom of expression is protected in the country, you will be unable to recall any cases where people’s freedom of expression has been restricted,” he claimed.

Asked by a journalist as to whether the government attaches great importance to the supporters of right-wing politicians Levan Vasadze and Guram Palavandishvili, Kakha Kaladze said: “What does Palavandishvili have to do with it? Those who act wrongly and break the law will be punished accordingly.”

On July 5, Tbilisi Pride will hold a ‘March of Honor’ on the central Rustaveli Avenue in Tbilisi. The slogan of the march will be ‘Come Out for Solidarity.’ In addition, Tbilisi Pride will organize a documentary film screening and a music festival during Pride Week.

On Monday, 28 members of the European Parliament called on the Minister of Internal Affairs of Georgia, Vakhtang Gomelauri, to protect the freedom of expression and security of the Tbilisi Pride events.
The MEPs wrote a letter to Gomelauri, and also addressed the EU Ambassador Carl Hartzell, and Josep Borrell, High Representative for Foreign Affairs and Security Policy.

The MEPs wrote that the recent comment of Irakli Kobakhidze, the Chairman of the ruling Georgian Dream party, in which he said the march of dignity should not take place, goes against universal human rights.

“Between 1-5 July, Tbilisi will see its Pride March celebrations take place. These will include three main activities throughout the five days, including the official premiere of ‘March for Dignity,’ a documentary about the first-ever Tbilisi Pride Week in 2019 (1 July), the Pride Fest with local and international artists (3 July) and the Pride ‘March for Dignity,’ co-organized by local social movements (5 July). Collectively, these will constitute a major event where the diversity of the LGBTI community is celebrated and affirmed,” the MEPS wrote.

“Pride demonstrations are peaceful tools for political advocacy and one way in which the universal right to freedom of expression and peaceful assembly is crystallized. They are a hallmark of the LGBTI activist movement, a pillar for social visibility, and they are equally political demonstrations during which the community voices its concerns, highlights its achievements and gives an opportunity to its members to demonstrate in favor of equality. As such, the recent comments of the Chair of the Ruling Georgian Dream Party, Irakli Kobakhidze, who said that the Pride March had to be cancelled, are in contravention of these universal rights and of the established precedent in Tbilisi.

“It is thus in this spirit of support that we address you, Minister, in order to ask not only that the Pride is, in line with the universal right of peaceful assembly and freedom of expression, effectively allowed, but also that all the preparations be taken so as to ensure the effective enjoyment of the manifestants’ right to freedom of expression and peaceful assembly, all the while availing themselves of authorities’ protection,” reads the letter.

Irakli Kobakhidze, the head of the ruling Georgian Dream party, said this week that he believes that the holding of Tbilisi Pride events should be canceled.

Kobakhidze told TV Pirveli that based on his personal view, the organizers should cancel the scheduled events “considering the full context and the current situation.”

“I have my opinion on this issue, and I think that, given the full context, these people should cancel this event. It would be the responsible decision,” he stated, adding that this wasn’t aimed at pleasing the Church, because “the Church does not need his support.”

Organizers of Tbilisi Pride responded to the criticism from politicians, public figures and the Patriarchate regarding the upcoming Pride Week, reaffirming that their demonstration and other scheduled events will be absolutely peaceful.

“We won’t arrange any provocation; our Pride Week will be absolutely peaceful, although provocation and aggression is expected from radical right-wing groups. Sadly, as yet, we haven’t received any security guarantees from the Ministry of Internal Affairs,” say the organizers.

On Wednesday, the Pride organizers met with the representatives of the MIA. However, the Minister himself didn’t attend the meeting. Following the meeting, the organizers said the MIA had asked them to cancel the events. The organizers refuse to do so.

The Pride organizers also responded to a recent letter published by the Patriarchate, saying that it promotes hate and violence.

The Patriarchate stated in the letter that embassies and MEPs shouldn’t publicly encourage and support the holding of Pride events in Tbilisi. Based on the same document, the Patriarchate calls on the government “not to promote destabilization.”

Pride organizers say that the Patriarchate not only verbally supports the violent right-wing groups, but also participates in their mobilization.

“The only institution that causes destabilization in this country is the Patriarchate. They offer false allegations, suggesting we want to provoke confrontation and carry out propaganda. We just want to use our constitutional right to freedom of expression, and do so peacefully,” Giorgi Tabagari from Equality Movement told Formula.

“The Patriarchate’s statement clearly shows what kind of values they rely on nowadays and how far they are from Christian values,” said Tamaz Sozashvili, representative of Tbilisi Pride.

On July 1, Georgian MPs Khatuna Samnidze and Ana Tsitlidze, together with the organizers of the Tbilisi Pride, held a briefing in Parliament and once again asked the Minister of Internal Affairs to come to the legislature to answer questions about the security guarantees for Pride Week.

“Unfortunately, we still do not have an answer. Regulations have been violated, a committee has not been appointed, the Minister, who has an obligation to answer all questions, tells us nothing. I call on the Chairman of the Human Rights Committee to appoint a committee and we ask the Minister to come to Parliament and give an answer to the deputies and the organizers of the Pride Week,” Samnidze said.
Georgian President Salome Zurabishvili spoke out mid-week in support of Tbilisi Pride events. “All forms of violence, threats, pressure and hate speech are unacceptable to me! It is unacceptable because it is a violation of the constitutional rights of the people. It is unacceptable for me as a guarantor and protector of the Constitution,” she said.

She highlighted that everyone has the right to exercise freedom of speech.

“Everyone has the right to exercise freedom of speech. This is our ancient tolerance, which is part of our identity. Our country was built on this and will develop upon it tomorrow too. That is why I also believe that everyone has the right to demonstrate. The participants of Tbilisi Pride have the right to express their opinion and exercise this right, which is a constitutional right of all, in accordance with the norms established by the Constitution and the law. This is important for our country and our unity!”, said the President. 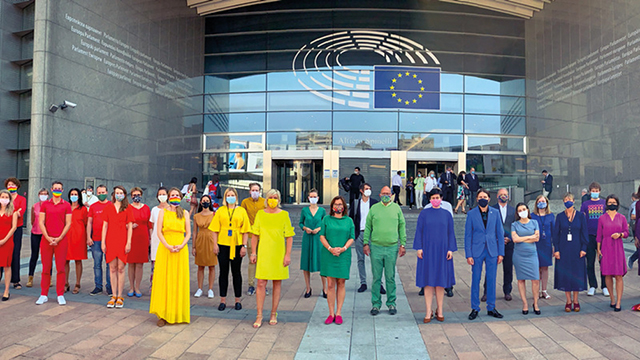 “Protect the right to freedom of assembly at 2021 Pride Week in Tbilisi,” reads the joint statement of the United Nations system in Georgia, the Delegation of the European Union to Georgia, the Embassies to Georgia of Austria, Belgium, Canada, Czech Republic, Finland, France, Germany, Greece, Israel, the Netherlands, Norway, Spain, Sweden, Switzerland, the United Kingdom and the United States, and the Head of the EU Monitoring Mission in Georgia.

In their statement, the embassies reiterate their prior call on the Georgian state, political, civic and religious leaders to fight all forms of discrimination and prejudice, and to take all possible measures to prevent violence.

“In support of equality and human rights for everyone in Georgia, we express our solidarity with the lesbian, gay, bisexual, transgender, intersex and queer (LGBTIQ+) community and urge the Georgian authorities to secure the right to peaceful assembly for all people in Georgia without exception, and to enable these events to take place without participants having to fear becoming victims of hatred and violence.

“The Constitution of Georgia guarantees everyone’s right to assemble publicly and to the freedom of expression. This includes the right of LGBTIQ+ people to organize manifestations, public events, and their right to speak publicly about matters of their interest or concern. Georgia’s landmark Law on the Elimination of All Forms of Discrimination of 2014 rests on the principle of equality as enshrined in the Constitution and prohibits all forms of discrimination based on sexual orientation and gender identity and expression.

“All States have a duty to facilitate and protect the exercise of the right to freedom of peaceful assembly. It includes a duty to facilitate assemblies at the organizers’ preferred location and to protect assembly organizers and participants from those who may seek to undermine their rights. The Universal Declaration of Human Rights and the International Covenant on Civil and Political Rights affirm that no human right may be invoked to destroy another human right.

“The COVID-19 pandemic has amplified social and economic dividing lines, and deepened marginalization and invisibility of many people in Georgia. Exercising the rights to freedom of assembly and of expression are essential in empowering people to overcome their exclusion from political, economic and social life. Public assemblies are at the heart of a functioning democracy. We reiterate our prior call on the Georgian state, political, civic and religious leaders to fight all forms of discrimination and prejudice, to take all possible measures to prevent violence and to instead embrace a respectful and compassionate public discourse.

“We stand together for the right of everyone to live free and equal,” reads the statement.

Pride parades are outdoor events celebrating lesbian, gay, bisexual, transgender, non-binary and queer social and self-acceptance, achievements, legal rights, and pride. The events also at times serve as demonstrations for legal rights such as same-sex marriage. In Georgia, such events are often surrounded by tension and controversy, as a conservative part of society and right-wing political parties believe that this is against the traditions and moral values of the Georgian people.