The 170+ Day Protest to Shut Down the Namakhvani HPP 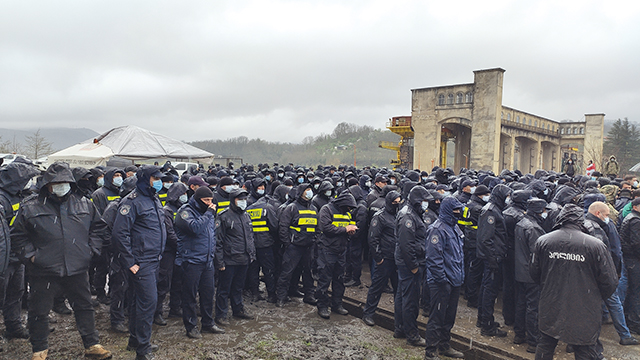 Over 170 days of protest against the construction of the Namakhvani Hydropower Plant in northwest Georgia this week continued with a “Guardians of the Valley” rally next to the construction site, and then further protests in central Kutaisi after police dismantled the protesters’ camp and fenced off access to the area.

The HPP cascade project is to be built in the Tskaltubo and Tsageri municipalities north of Kutaisi by Turkish construction firm Enka Renewables. Despite strong local resistance and the involvement of activist groups, construction work has been ongoing, with the territory being strictly controlled by police forces.

The criticism surrounding the project is actively supported by green activist groups, non-governmental organizations and experts, who suggest that the project will impact the environmental and social setting in the region, with consequences that may well be dangerous for the whole valley, even potentially putting Kutaisi, one of the largest cities in Georgia, at risk. 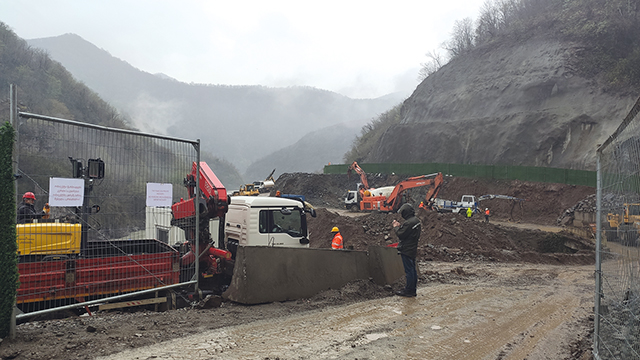 After failing to find common ground with the protesters and to address their concerns, the government opted for police force , creating checkpoints, blocking off several villages, and dismantling what had been the main base for the protest near the construction site.

The tents at the Namokhvani camp, which the protesters set up on private land belonging to one of their number, Lali Efremidze, were removed by the police last Sunday, who claimed the area was unsafe due to the high water level of the nearby River Rioni which “could overflow.” This decision followed Saturday’s incident, where a young man disappeared from the camp after going into the river.

The officers then set to preventing protesters from coming back onto the land.

At the end of March, an agreement was reached between the government and Enka Renewables, based on which the construction of the dam will be suspended for 9-12 months.

“We have reached an agreement with the company on several points, among them that the dam construction works will be suspended for 9-12 months,” Georgian Prime Minister Irakli Garibashvili announced. “Everything will be checked well, with the participation of foreign and local experts. The potential impact on the environment will also be re-examined. A GEL 5 million fund will be created for the development of the Rioni Valley at this stage. At the same time, I would like to highlight that this company has already spent 30 million in compensation to date,” Garibashvili said. 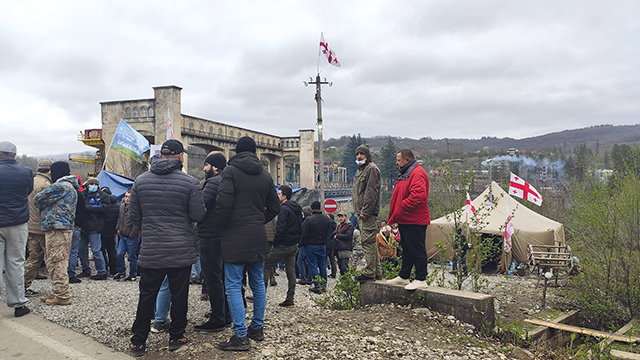 In response to their camp being shut down on Sunday, protesters blocked the road in Gumati village, 10 kilometers north of Kutaisi, in order to prevent the trucks ordered by Enka from continuing to feed the construction works in Namokhvani. Government representatives once again tried to reassure the Guardians that only the road and “secondary elements” are being built, but the protesters remain firmly convinced that the dam is still being worked on.

Protesters then demanded safe entrance to Namokhvani village to allow them to replace their tents and resume their peaceful protest. They were refused, and, on Monday, the protesters tried to break through the police lines in Gumati, resulting only in the number of officers being doubled.

One of leaders of “Guardians of the Valley,” Varlam Goletiani, asked the police why they were blockading, to which he received the reply “the checkpoints are necessary for the safety of the people, and to prevent interruption of continued search operations for the missing man.”

Goletiani pointed out that the original camp territory had nothing to do with search operations in the river, nor did it represent an area at risk of possible flooding.

“This is just an answer for an answer. We know exactly what they’ll say, but we ask anyway, so people can see their deliberate policy and rhetoric,” Goletiani told journalists.

The protesters set up one tent near the police checkpoint in Gumati for three days, and clashes broke out, seeing 9 members of the “Guardians” arrested. But on Wednesday, the group moved to Kutaisi accompanied by a convoy of cars which drove around the city, calling on people to join their protest. One of the arrested protesters joined the Kutaisi rally, having been released from court. The other eight remain detained.

The same day, police blocked access to Namokhvani with an iron fence.

In Kutaisi, the Guardians of the Valley continue to demand safe passage to Namokhvani village, so they can set up a new camp zone and continue their peaceful protest against the hydropower plant construction.