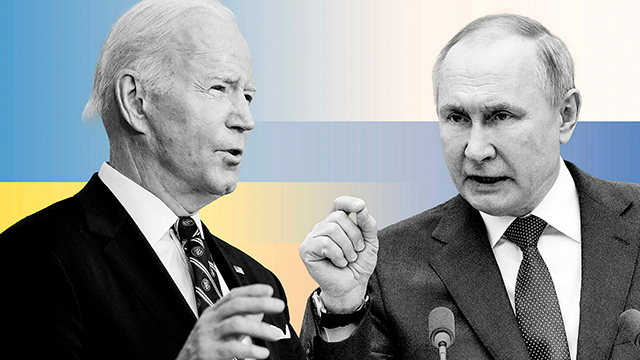 The war-ridden 20th century is in the past, the Cold War is over, the powerful giant of the USSR has disappeared, and the world has become a seemingly safer place to live. And yet the Russian-American ideological and strategic bickering is still ongoing, their feud interminable and unabated. The West in general and America in particular, keeping up the banner of freedom and democracy, are intensively and decidedly helping Ukraine to defend itself from the Russian aggression. Their support is clear and present, and the determination to continue so is adamant. Preferences are stated and the intentions are known to the entire world.

I only wonder if America would ever get involved in a direct military conflict, and why Ukraine is more valuable to America than to Russia. I received a prompt answer to this from the author of many books on American and world politics, Bill Thomas, who, by the way, is our Georgia’ longtime dedicated friend: “If Trump were president, there would be no war in Ukraine. The long-term policy of the Obama-Biden administrations of the Democratic Party has been to topple Putin. The Ukrainian government, controlled by organized crime bosses, has let itself be used for that purpose, and we can see the results. Most Americans don’t know the role the US has played in starting the ongoing proxy war with Russia. Blame that on the Democrat-controlled mainstream media here, but enough people are beginning to realize that giving billions in military aid to Ukraine, one of the most corrupt countries in the world, is not a good idea, especially with the American economy in such bad shape, thanks to Biden’s policies, which are really the work of Obama, who’s running the show behind the scenes. Keep in mind that the other goal of the Democrats is to wreck the American economy and along with it American self-confidence, turning the United States into Euro-style neo-socialist type of a country. I don’t think Biden/Obama would ever risk a direct confrontation with Russia. And a new Republican House and Senate in November could make that virtually impossible.”

Before I ventured to throw in this quote, I asked Bill for his permission to use it, and he said to go ahead. I will surely keep the correspondence in my archives for a while. As an American citizen, I certainly want any American administration, whether Democrat, Republican or Independent, to be strong, fair and efficient, and being a journalist in action, I am refraining from taking sides or making points. Bill is a weathered American conservative and I am not surprised at his words, but what if he’s right? Well, hunting for the ultimate truth and pulling it into my stories has become a difficult venture to undertake, especially since the infamous Russian-Ukrainian war was unleashed. That is why I’m always compelled to allude to quotes and excerpts from various sources.

Let’s have a look at this one now, which comes from an American Democrat: “The conflict is a clear test for democracies around the world, and the Ukrainian resistance against Russian forces is part of a great battle for freedom.” Yes, these words belong to President Biden. Somebody might say that the American President is more believable than another American man of letters, but it is democracy that prompts us to treat any opinion with equal honor and fairness, whether it belongs to a king or his subject.

Here is what Harlan Ullman, one of the often-quoted American opinion contributors says: “Russian military doctrine asserts that to defend against a perceived existential threat to the state, nuclear weapons would be used. Would a defeat in Ukraine trigger that use to shock Kyiv into surrender or an imposed peace? That remains one of many potentially existential questions that cannot be discounted or answered with certainty.” Even the mere mention of nukes as a finale to this tragic rhapsody throws us into awe, saying nothing about its actual usage as an imaginable consequence of this desperate confrontation, officially called the Russian-Ukrainian war but having already developed into proxy warfare.

Call it what you want, but the worldwide thoughts and utterances about the war are disparate, and most of them are put forward with dubious hesitation, and the worst tragedy of the moment is that the world will definitely become poorer if it loses either Russia or Ukraine, more so if it loses both.