Telavi: Throne of the Old Empire 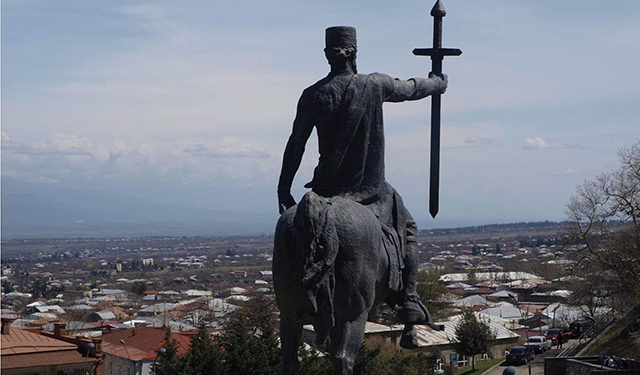 A statue of Georgian King Erekle II in the central square of Telavi. Photo by Mike Godwin

Telavi is one of the oldest cities in the nation. As a former capital of the Kingdom of Kakheti, it holds a special place for a lot of the modern residents. Even today, as an administrative center and economic hub, it commands the region.

From as far back as the Bronze Age (3300 BC to 1200 BC), this has been a settlement full of human traffic. Through the Middle Ages, it remained a political and economic node for the eastern Georgian kingdoms. Persian, Russian, and Mongolian armies punished themselves for the opportunity to control this otherwise unassuming ville.

However, spending a weekend here is an easy and inexpensive adventure. The journey out to Telavi is scenic, albeit very rustic in its visual offerings. While the traditional Marshutkas are available, for a slightly additional charge a shared taxi can be acquired from Tbilisi’s Isani bus station. Simply saying “Telavi” will alert the drivers which vehicle you should load into. After the driver finds the additional passengers to fill the vehicle, albeit sometimes over capacity, it’s onto the highway east.

Meandering through the hills, the view is incredible. For one used to urban city centers, it is a welcome sight to see fields of crops, livestock, and snow-capped hills in the distance. As we near the town, the massive peaks of the Caucasus mountains begin to dominate the northern horizon. Distant farms and miniscule country homes pepper the fertile Alazani Valley, a place known very well for its incredible vineyards and wine production.

Entering Telavi from the west, it has an unassuming charm to it. A place that remains outside the grasp of so much outside influence. Even Tbilisi, unique unto itself, has succumbed to some of the trappings of European city stereotypes.

Upon stopping in the center of the town, the first smells of the open bazaar hit, and it’s on foot from here. Navigating to most guest houses is easy, although many are uphill. For myself, the home is a small family operation. Greeted by the husband and father, I am promptly shown to my room. A small and simple affair, it is perfect for the minimalistic attitude I have imbibed for this journey.

Complete with a common area, kitchen, and courtyard, it offers far more than a standard hotel room, however. A short walk into the town’s central area unveils plenty of curiosities. Spice markets, fresh meat, live fish, vegetables that most likely were grown less than a few kilometers from town, and, of course, the homemade wine. For culinary needs, the town has a litany of small restaurants, bakeries, and street food vendors. One cannot go hungry in Telavi.

After a quick bite to eat, it’s off to the main attraction: the castle. Telavi is home to one of the best preserved medieval castles in the country. This citadel also houses a museum, church, and a restoration of the home of Georgian king Erekle II. It is also an excellent place to capture breathtaking views of the Alazani Valley, Caucasus Mountains, and the city itself. The museum holds many incredible ancient Georgian treasures, something any history or culture enthusiast must experience.

With exceptions such as the public service building and a few of the big brand hotels, much of the town looks the same it has for decades. It is a place of immense beauty. The city sits atop a hill, and on the slopes of a small mountain range that almost separates the valley from much of western Georgia. In a position that has long held the same importance, the town has watch over the entire area.

Looking back historically, a Kakhetian noble, or even Erekle II himself, could see any activity as well as have early notice of enemy movements. This dominating position has, as mentioned, made it an important hub for centuries. Trade routes in the region all had to pass through the town, making it also a center of culinary traditions for eastern Georgian cuisine.

Another walk through the city’s bustling bazaar shows how so many of these traditions are still alive. Local fish in a large tub of water, smoked meats hanging from display hooks, and mounds of spices and vegetables fill the stalls. Bolts of cloth of various fabrics, a litany of home-goods, and even raw iron ready to be wrought at one’s home are other simple goods available. So much of these have likely not changed since the king held court in the city between 1744 to 1762.

Towards the closing of my stay in Telavi, it was surprising to find a ride out of town. Walking towards the center of town, a taxi driver asked me if I was going to Tbilisi. It might have been the large pack on my back that gave it away, but indeed I was. After a quick stop to pick up additional passengers, we’re off on the road.

The drive back is almost just as majestic as the town itself. Curving roads through immense mountain valleys, still with their snow caps, are everywhere. Small homely villages and the occasional ancient or Soviet-era ruins are all along the road. If needed, the way also has several opportunities to stop for a small meal, coffee, or any traveling needs.

Upon returning to Tbilisi, I’m very satisfied with my impromptu decision to escape the big city. I had my worries, as Telavi doesn’t have the popularity as other places such as the Black Sea jewel Batumi or the ski resort town of Gudauri. Nonetheless, the small mountain town was a much needed respite, offering the change in environmental dynamic I so desired.