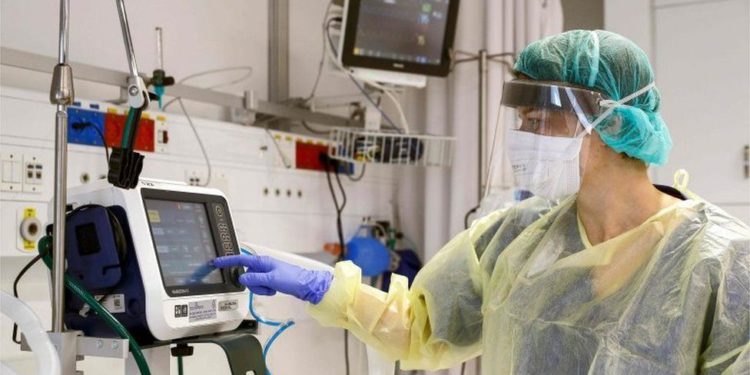 Twenty-nine out of 30 moderate-to-severe COVID-19 patients who were administered a treatment developed by Tel Aviv’s Sourasky Medical Center (Ichilov Hospital) as part of a Phase I trial, recovered from the disease and were released within three to five days, the hospital announced.

The 30th patient also recovered, but it took longer, the Jerusalem Post reports.

The drug, called EXO-CD24, is an innovative compound based on enriched CD24 exosomes, and is inhaled directly into the lungs to eradicate the cytokine storm that results from the COVID-19 virus.

Israeli Ambassador to Georgia Ran Gidor responded to this important news on social media, calling it “Dramatic progress towards a cure for COVID-19.”

The COVID-19 virus has two key stages. The first stage is similar to influenza and does not require specific treatment, but rather supportive treatment only. The second stage occurs in 5 – 7% of patients, typically in those with risk factors, and is characterized by an overactivity of the immune system. This is called the ‘cytokine storm’. Until today, despite endless efforts, no drug has proven to be effective in treating coronavirus.

“Even if the vaccines do their job, and even if no new mutations are produced, coronavirus will still remain with us in one way or another. As such, we have developed a unique drug: EXO-CD24. This is an unprecedented event. Some six months have passed since the moment the concept was conceived and the technology was invented until it was first tested in humans in the first clinical phase”, says Prof. Nadir Arber, one of the hospital’s most prominent doctors and researchers who has been entrusted with developing the drug.

EXO-CD24 is an innovative, Israeli, target-focused drug that was developed on the basis of many years of research in Prof. Nadir Arber’s lab in the Tel Aviv Sourasky Medical Center.

The compound is intended for patients in moderate to critical condition, to prevent their deterioration to a more severe condition.

“The drug is based on solid exosomes that are released from the cell’s membrane and which perform intercellular communication. We enrich these exosomes with the CD-24 protein. This protein is expressed on the cell surface and has a well-known and important role in regulating the immune system”, explains Dr. Shiran Shapira, who directs Prof. Arber’s lab and has been leading research into the CD24 protein for over two decades.

“The compound is administered by inhalation, once a day, for just a few minutes, over five days. The uniqueness of the compound lies in the following facts: it has a dual mechanism that works to inhibit the operation of the pathway that leads to the immune storm and the multiple cytokine secretions. The compound is targeted directly at the heart of the storm in the lungs and, unlike many other compounds in the world that are systematically administered, and which selectively inhibit a particular cytokine or work more broadly thus causing severe side effects, ECO-CD24 is administered locally, works broadly, and has no side effects. This is an advanced compound which can be produced quickly and efficiently at a very low cost in every pharmaceutical facility in the country within a short time frame, and can supply all global demand”, explains Prof. Arber.

Prof. Ronni Gamzu, CEO of Ichilov Medical Center, added that “Prof. Nadir Arber is a talented researcher and doctor. The research that has been carried out at his lab is innovative and sophisticated and may save coronavirus patients. The results of the first phase of his research were excellent and gave us all a measure of confidence in the method he has been researching in his lab at Ichilov for many years now. I am personally assisting him in continuing to obtain approvals from the Ministry of Health to conduct further research in a thorough and in-depth manner. As stated, the global understanding now is that, alongside vaccines, it is extremely important to develop drugs suitable for the disease, and there is a lot of research activity being carried out on the topic; I am proud that already now in Ichilov, among the first in the world, we are working in this field of research and perhaps bringing the start of an Israeli answer to this terrible global pandemic.”