Taking Stock of Recent Developments in the South Caucasus. Part I 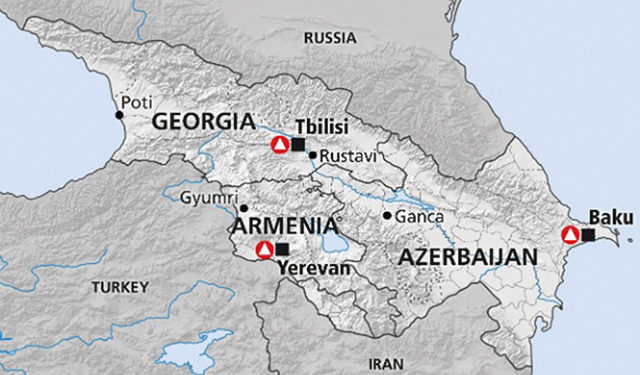 Georgia’s regional position is quickly changing. External powers are increasing their influence in the South Caucasus, causing revverbations across the very fabric of the geopolitical balance of power which had prevailed for years, if not decades. Take Russia, which, it must be said from the outset, is less interested in a final settlement of the Nagorno-Karabakh conflict. This Kremlin policy is based on the traditional geopolitical interests that have driven Moscow in the South Caucasus since the 1990s: maximization of divisions within the region to maintain its influence; promotion of cooperation and and economic integration should be pursued only under Moscow’s auspices.

From a purely geopolitical point of view, Russia’s actions are part of a rather logical policy. By deploying 2,000 peacekeepers in Karabakh, Russia is now exerting direct influence over Azerbaijan. At the same time, the Armenian population today sees Russia as an opportunity to maintain its positions in the remaining Armenian-populate territories of Karabakh.

Based on this, Russia will try to extend its presence in the conflict zone for another five-year term in 2025, when the first term for the deployment of peacekeepers in Karabakh expires. Russia, however, will be facing the issue of always having to strike a certain balance. The point here is that Baku will not be fully satisfied with the fact that the Russian army is stationed on the internationally recognized territory of Azerbaijan, a fact that will occasionally cause tensions between Moscow and Baku.

At the same time, although not directly supporting Yerevan, Moscow has indeed managed to position itself as the savior of the Armenian population. However, this has not been able to fully ease tensions in Armenia-Russia relations, and, consequently, Moscow will have to maneuver, a game in which it will try to partially satisfy both Baku and Yerevan’s demands. Moscow will also have to prove to Baku every five years that the deployment of peacekeepers should be prolonged. For this, Moscow can use Armenia’s military preparations for a future conflict and the coming to power of politicians who are intent on pursuing a tough policy towards Azerbaijan.

Another interesting development for Georgia is Iran’s changing position in the region as a result of the Second Karabakh War. A brief introduction would be needed here: Iran’s diplomatic efforts during the latest Karabakh conflict did not yield results; after the war, Iran began to face a completely changed geopolitical picture along its northern border. Emboldened Azerbaijan, with which Iran has had periodically difficult relations since the 1990s, is a different state for Iran today. It is possible that this is exactly why Tehran changed its rhetoric towards Baku, with various statements made in support of it during the 2020 war.

There has been some deviation from the pragmatic model that has driven Tehran in favor of Armenia in the Armenia-Azerbaijan conflict since the 1990s. Azerbaijan’s victories in the autumn of 2020 changed the status quo, and Iran has been forced to adjust to the new reality. It is therefore not surprising that the Iranian media has taken a relatively pro-Azerbaijani stance since the end of the war. Moreover, Iran’s Foreign Minister, Javad Zarif, has since made several statements in which he directly congratulated Baku on the returned territories.

Against the background of all this, Zarif’s regional tour was in fact an attempt to show the geopolitical importance of Iran in the quickly changing South Caucasus. Iran presented a regional peace initiative, important for Tehran, as it sees the role of Russia and Turkey in the region growing and steps needing to be taken, be it through peace initiatives or something else.

Regarding Georgia, we should not expect any particular changes in Iran’s foreign policy. It will remain just as pragmatic as before. Iran is interested in Georgian ports and other infrastructure that will help it reach the Black Sea. Iran is also interested in restoring direct rail traffic with Russia. Today, there are talks about the restoration of the Soviet-era railway from Azerbaijan to Armenia, which will potentially also connect Iran directly with Russia. But Iran is interested in additional directions too: a line from Iran to Azerbaijan via Russia, which is still under development. The second option is from Armenia via Georgia, which leads to the resumption of talks on the Abkhazian railway, although economic sustainability is at stake in this project.