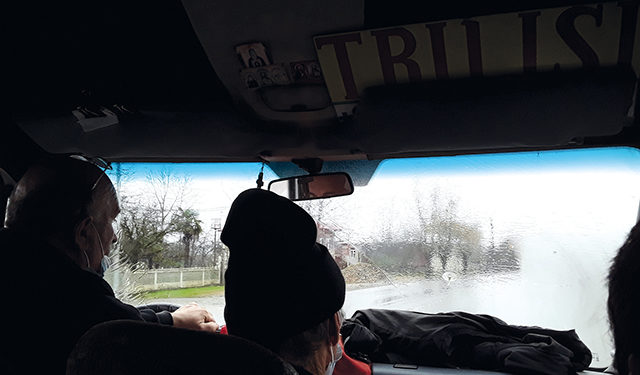 Title borrowed from Supertramp’s song of the same name, from their classic album “Breakfast in America”.

Home, from Tbilisi, is always the long way, nearly 500 km to Etseri, Upper Svaneti. If I don’t have a good reason to drive there and back using my own gas-guzzling 4×4 Toyota 4Runner, I take the regular marshrutka (minibus) between Mestia and Tbilisi, which is what I did this time. It leaves the capital from a couple of locations: below Samgori Metro and in front of the main Railway Station. 7am start, 8-9 hour journey with two meal stops en route.

I Bolted, most conveniently, to the railway start for 0630, having a bit too much luggage to lug through the city’s Metro. First passenger for the Mestia van, which might never have happened to me before. But it’s a slow season now in Georgia, with summer tourism wound up and skiers not yet arriving, and perhaps few local people making the journey.

Almost instantly, a lady in her 50s or 60s appeared selling hot tea, coffee or cocoa, as well as cigarettes, bottled water and snacks. “I get up at 5 am daily to do this,” she announced, “to make ends try to meet.” Other people of similar ages were also making the rounds, as there would be plenty of alternate destinations across the country starting from here all day long. Everyone just trying to get by. A street sweeper lady also began her job.

Having heard the hot drink seller’s sad story, I decided to give her 20 GEL as she left, which she refused only for a moment, then took with profuse thanks. A minute later, she was back to slip a chocolate bar and a pack of salted bread snacks into my pocket, which I also reluctantly accepted. How many hundreds or thousands of such are there in Tbilisi and elsewhere?

We set off with a nearly full complement of passengers; I’ve done this so many times over the decades, it’s all old hat. But still, each time there are new things I notice.

The big pass between east and west Georgia is still undergoing its Chinese-run transformation from 60 km bottleneck to doubled highway, so we won’t be stuck behind fleets of trucks anymore. Now they are focusing on building embankments edging the many riversides which this project threatens, hopefully to preserve the natural systems coexisting with the engineering megaproject. A couple more years, I suppose, and there will be a completed highway from Tbilisi to Batumi, with branches to the bigger cities on the way.

Rain obscured the views, and fogged up our windows on this cold day, but I tried some camera-phone shots as we passed through endless villages. Where the roads are being re-laid, such as in Senaki, the old tarmac has been dug up and left on roadsides in hideous broken piles which will take decades if not longer to disintegrate back into the earth. Georgia might be stunningly beautiful, but it also has plenty of less gorgeous sights if that’s what you happen to notice. Same as everywhere in this regard, I realize.

Petrol stop, eating stops, passengers leaving and new ones entering, impromptu postal system collecting and delivering parcels of all sizes on the way. Poor driver getting endless cell phone calls connected with all this, and trying to get us safely from A to B. At least he’s no longer smoking in the van nor drinking moonshine when he stops, like in the “good old days”.

We begin to ascend from Jvari into Upper Svaneti at last, and eventually the rain turns into the expected snow. Now the mountaintops are graced with this while their lower slopes are still stuck in late autumn’s reds and golds, always a beautiful combination. There are easily a hundred new temporary waterfalls as well on the way, I estimate, pointing to the heavy precipitation which the region has been having in my absence.

My wife has overseen a drop-off of half a ton or so of soft drinks at the junction of our road and the highway, and one of her younger school pupils is guarding this while I add my own bags to it and trudge the 1 km home, then return with the car to load it all up. Home at last, into her arms, wood stove burning, waiting for electricity, which does eventually return as the night closes in. Home.