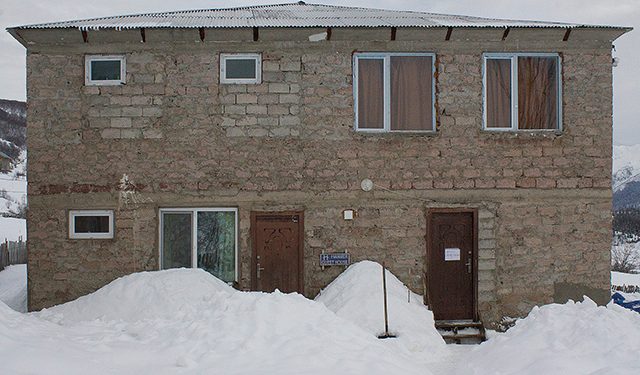 Having announced our departure from Svaneti for the coming winter, it’s time for me to recount some of the things I have discovered while living in this mountainous province since 2007. There are many! I will divide them up into the four seasons as these rhythms seem to rule so much here.

Winter is Long
It can easily take up half the year. You need to be as ready for it as you can. Firewood cut and split one or, better yet, two years earlier so it can dry out maximally for minimal smoke and creosote buildup! This is perhaps the main preparation. We get new logs delivered by oxen-pair straight from the forest, to which we don’t have logging rights as outsiders; I then chain-saw these into the right lengths for the wood stove, and split them either then or let them dry a year before this final step and more drying. Try and store it indoors: I have had my life’s fill of digging down under the snow to find the tarpaulin under which my firewood is buried! Now I have a trapdoor into the crawlspace or half-basement in our guest dining room, and there are stacked enough split lengths of wood for the whole winter at least.

My other source of firewood, especially kindling (the smaller stuff, for starting the fire with), is gatherings from all the building work we’ve done over the last 12 years here. If it’s big enough to see and pick up, it’s big enough to burn. These humble scraps off the ground once filled about 60 sacks from 50 kg of flour or sugar, and I kept them all in the barn, bringing a few to the house each time as they were needed. The massive Svan wood stove makes all the difference, really. It’s the largest such stove type in all Georgia, reflecting our colder climate. You can supplement with electric heaters, as long as your electricity is strong and consistent enough, neither of which is to be counted on, however. I also keep a bottle of diesel on hand (never petrol or gasoline, much too volatile), to start the thing as easily as possible: no point in struggling to light it!

Knowing your whole system of stove-running is also essential, something which might take years to learn all the subtleties of but which really makes it as painless as possible. The cycle of cold air flowing into the firebox, heating up, circulating through the whole stove’s double walls, and exiting out the chimney needs to be going before you shut the firebox door. You want to minimize indoor smoke during this time by opening nearby windows until the thing is practically roaring, then shut them. And being aware of how wind movement outside can affect smoke ingress is also vital. We only use the stove during winter, unlike everyone else who keeps it going year round: we use electricity for cooking as much as possible, and a gas bottle to supplement this as needed.

Stock up on layers of clothing, because these are another key way to keep warm, from toes to head. Get the best stuff you can afford, which should also be easily washable. During the two winters I lived in Ushguli, Europe’s highest village, I kept two sets of six layers of clothing ready to jump into as soon as I crawled out of bed: my unheated room got down to -4C, which gave me the best sleeps of my life but did not make for leisurely dressing! 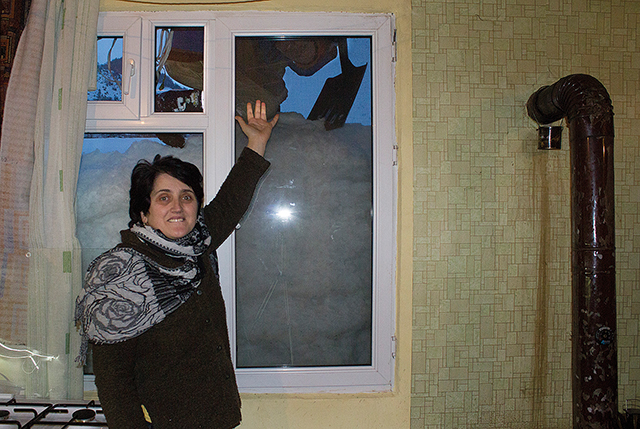 Do all your food preserving or freezing: cheese, meats, vegetables, fruits, pickles, jams and more. You won’t be cut off from food distribution services anymore by bad roads, at least not for long, but it’s good to stock up in the other three seasons when work is easier. Make sure a shovel or two are ready for snow removal too, even keeping one indoors in case you can’t find the top step outside in the morning…

Another very important item is water. If you don’t leave a tap running, even just a little, you risk having your pipes freeze. And the more you can do to have ACCESS to those pipes in case you need to “wake them up”, while keeping them insulated at the same time, the better. 1000L water tank, high enough for gravity feed and also insulated? Great. Motorized pump? Not bad, but useless if the electricity goes out (which it will eventually). Redundancy, and non-reliance on power, are good mottos.

The final step for winterizing is a mental one: preparing yourself for the sheer onslaught of whiteness, turning the world monochrome for up to six months. It IS beautiful, if you care to notice. Fall has given such splendors of warm colors as the leaves change; spring carpets the world in every shade of green, followed by its and summer’s riot of all the wildflower hues. Winter is white on black, and silent except for the occasional howling wind. But snow, too, and ice and frost, give endless variations on the simple arrangement of two hydrogen atoms to one of oxygen. Worth noticing, marveling in, and celebrating. Winter in Svaneti.