Surging Pandemic Surpasses 1 mln Deaths in the WHO European Region 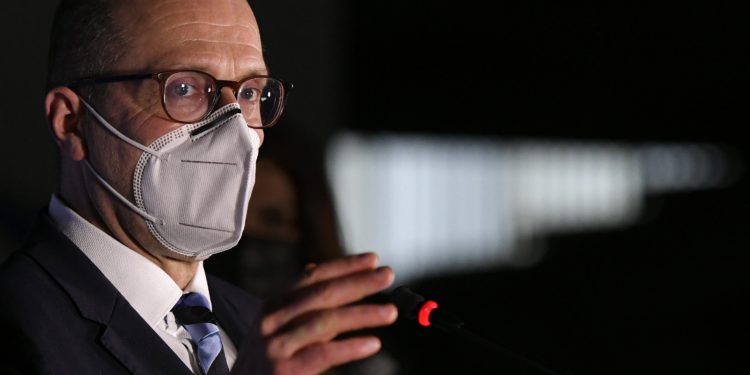 A top official from the World Health Organization says Europe has surpassed 1 million deaths from COVID-19.

Dr. Hans Kluge says the situation remains “serious,” with about 1.6 million new cases reported each week in the 53 countries that make up its European region.

Kluge pointed to “early signs that transmission may be slowing across several countries,” and cited a “declining incidence” among the oldest people. He says the proportion of COVID-19 deaths among people over 80, who have been prioritized for vaccines, had dropped to nearly 30%.

“Last week, we surpassed 1 million confirmed COVID-19 deaths in the WHO European Region.

“The situation in our region is serious; 1.6 million new cases are reported every week. That’s 9500 every hour, 160 people every minute.

“It is only among the oldest that we are seeing declining incidence. Over the past 2 months, the trend among people over 80 years of age has diverged from the trend seen in every other age group, possibly due to high vaccination uptake in this high-risk group. Since February, the proportion of COVID-19 deaths in Europe, among those older than 80, has gradually fallen to close to 30%, the lowest level since the beginning of the pandemic.

“Hospitalization, nonetheless, remains at high levels, with continued reports of intensive care capacity having been exceeded, from all parts of the region, including Greece. This April, COVID-19 admissions to hospitals and intensive care in France reached the highest levels since this time last year.

“Globally, there has been a very small number of cases of rare blood clotting disorders among the 200 million people that have received the AstraZeneca vaccine,” Dr Kluge notes.

“WHO takes safety events extremely seriously and our Global Advisory Committee on Vaccine Safety and the Strategic Advisory Group of Experts on immunization continue reviewing the evidence. WHO will provide guidance to Member States shortly. We urge Member States to report any adverse events that may occur following vaccination, as early as possible.

“For now, the risk of suffering blood clots is much higher for someone with COVID-19 than for someone who has taken the AstraZeneca vaccine.

“Let there be no doubt about it, the AstraZeneca vaccine is effective in reducing COVID-19 hospitalization and preventing deaths. WHO recommends it to all eligible adults to gain protection from the SARS-CoV-2 virus, as quickly as possible.

“We are also aware of reports of thromboembolic events with low platelets following vaccination with the Johnson & Johnson COVID-19 vaccine. WHO is monitoring these reports closely and will communicate its findings in due course.

“To date, some 171 million doses of 7 COVID-19 vaccines and products have been administered in the Region. Nearly 13% of the European population have received 1 dose, while close to 6% have completed their series.

“In Greece, where I am now, nearly 2 million people or 11% of the population, have received at least 1 dose.

“I congratulate my Greek counterparts on their extensive preparations to ensure that the country was ready to effectively receive and deploy vaccines. As part of the EU, Greece has demonstrated solidarity by supporting COVAX, acknowledging that the economy and prosperity of one country is intricately bound to another country’s prosperity, and in this case, bound to defeating the virus.

“But this is not only about equity between countries, it’s also about equity within a country, making sure that vaccine access and utilization doesn’t further marginalize the underserved.

“Low-income migrant workers, irregular migrants, those unable to physically distance or living in camps or camp-like settings, are a priority group for vaccine allocation, in the second stage of vaccination, when there are sufficient vaccines for 11–20% of a population.

“Again, Greece has led by example. The country’s entire refugee and migrant population, more than 100 000 people, are part of the national vaccination strategy, as they should be – alongside the general population. Mass vaccination campaigns in Greece’s refugee camps are scheduled next month.

“Once again, only vaccinating a chosen few, and excluding population segments, undermines our fight against the virus, everywhere.

“To those marking the month of Ramadan, I wish you and your loved ones a blessed holiday and urge you to celebrate safely,” stated WHO Regional Director Hans Kluge.