Stoltenberg: Russia Continues to Display Aggressive Behavior both Abroad and At Home 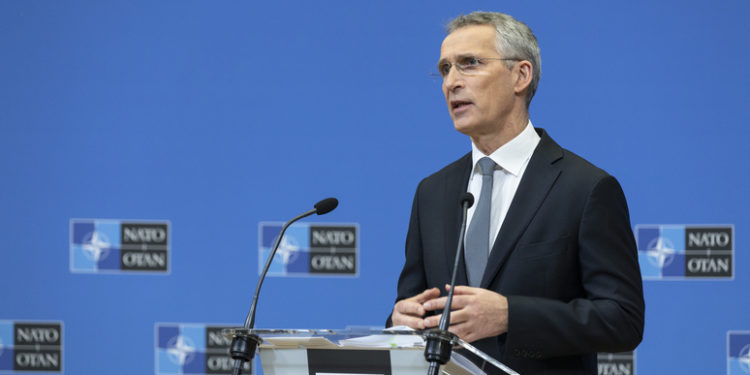 “The relationship between NATO and Russia has been difficult for some time now, and that is a result of Russia’s behavior, violating national law, using military force against neighbors; Georgia and Ukraine.“

“Russia continues to suppress peaceful dissidents at home, and display a pattern of aggressive behavior abroad. Including cyber attacks, and attempts to interfere in our elections and undermine our democracies,” Secretary General Jens Stoltenberg said at the pre-ministerial press conference on March 22.

He placed the Russian aggression as one of the main issues among the challenges for the alliance to be discussed in the upcoming week.

“We will, at our Foreign Ministerial meeting starting tomorrow, also discuss our relationship with Russia, and we have seen a pattern of more assertive behavior by Russia over the last years, including aggressive actions against nations, Ukraine of course, but also interference in our domestic political processes, undermining the trust in our democratic institutions or attempts to do so, and also interference in our election processes.”

Stoltenberg emphasized the easily detectable pattern in Russia’s aggression, calling it unacceptable and putting the ultimate responsibility on Putin.

“The relationship between NATO and Russia has been difficult for some time now, and that is a result of Russia’s behavior, violating national law, using military force against neighbors; Georgia and Ukraine. But also, Russia is responsible for aggressive actions against NATO allied member states through cyber, interference in our domestic political processes, and so on.

And this pattern of Russian behavior over some years, has triggered the biggest adaptation of our Alliance, since the end of the cold war, with high readiness of our forces, with deployment of battlegroups in the eastern part of the Alliance, with increased spending, and also of course the fact that we are stepping up our efforts when it comes to cyber defense, but also clearly condemning the behavior of Russia when they violate international law but also cracking down on peaceful demonstrators at home,” Secretary General said.