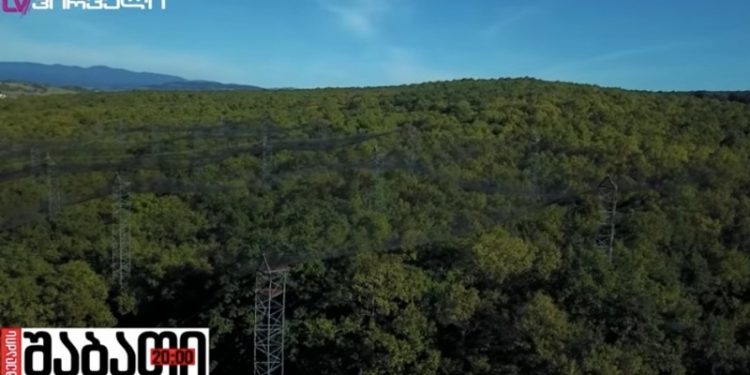 On 5 November, the National Forestry Agency announced that Agro Cartu had won a 49-year lease for three plots of land near the village of Chorvila, in Imereti, Bidzina Ivanishvili’s hometown.

With a winning bid of an annual rent of ₾32,877 ($12,000), ₾0.26 ($0.09) per square meter, the company will be obliged to set up animal shelters and breeding grounds for local birds. According to the auction records, Agro Cartu was the only company to bid on the lands.

However, according to a 2021 Transparency International report on offshore companies in Georgia, Agro Cartu is owned by Krista Investments Limited — one of 12 companies opened by Ivanishvili between 1998 and 2016 in the British Virgin Islands, according to the ICIJ’s Pandora Papers.

The forest in Chorvila is already partially covered with netting that prevents the birds from flying away.

In the footage taken by the TV company, it can be seen that some buildings have already been built on the site and the works are ongoing, and part of the forest is covered with black chem nets. The nets are held in place by mast-like structures.

“These are chem nets, a special material that is environmentally friendly, processed by a special method and will never pose any danger to the forest or birds… No equipment entered the forest,” Davit Chkhenkeli, director of the joint-stock company, told TV Pirveli.

“Why did the National Forestry Agency give the property management agency the right to transfer the forest to Ekaterine Khvedelidze, the wife of Bidzina Ivanishvili?” a TV Pirveli journalist asked Giorgi Chachiashvili, the acting head of the Forestry Agency.

Chachaishvili answered that he would write down the questions and contact the journalist, while in response to one of the questions – “Were you aware of this?”, he said: “I don’t know if it is Khvedelidze’s company or Ivanishvili’s. I was unaware of this…”

After the broadcast of the story, the National Forestry Agency issued a statement, in which it notes that “for obtaining the right to use the forest, in particular, for the right to arrange an animal shelter and building”, Khvedelidze’s company applied to the agency on November 25, 2021, and the auction was announced after that.

“The National Forestry Agency studied the situation on the ground. According to the agency’s decision, on September 23, a public auction was held on a plot of land of 125,248 sq.m.

“In order to enjoy the said right, the Agro Cartu LLC must pay 32,877.6 GEL to the forest management authority every year and also present a guarantee amount of 6,262.4 GEL. The agreement between the National Forestry Agency and Agro Cartu was signed in October 2022,” the agency adds.

The agency also mentions that the lease of special use of forests is not only a practice of Georgia, and it happens in “a number of European countries” as well.

According to the agency, the leasee is obliged to provide maintenance and protection of the forest and not to interfere with the implementation of forest restoration measures by the Forestry Agency.

“The relevant regional forestry service controls the fulfillment of the conditions provided for in the agreement,” reads the statement.

It is known that at the end of last year, the 5958 sq/m forest in Bakuriani township was also transferred to Prime Minister Garibashvili’s wife, Nunu Tamazashvili, for 49 years.

In addition, in 2019, the company of the wife of the former mayor of Tbilisi and the chairman of the Regulatory Commission of Energy and Water Supply of Georgia, Davit Narmania, was given 10 hectares of land near Tbilisi, adjacent to the Sabaduri Forest, with the right of disposal for 40 years.