Speaker: We would like to Further Contribute to Peace and Stability for Development of Our Region 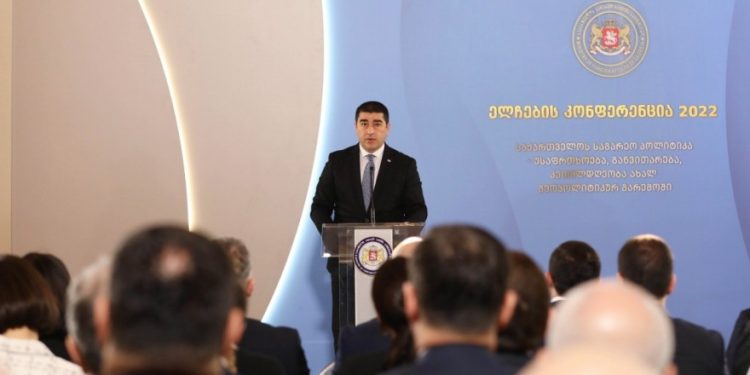 “Your Excellencies, I would like to express my gratitude to you for your efforts, for standing in for Georgia throughout the world and defending our country’s interests. Think upon the Parliament as your ally,” the Speaker of the Parliament of Georgia, Shalva Papuashvili stated at the opening of the Ambassadors Conference 2022.

The Speaker gave a welcome speech to the attendees of the annual convention of Georgia’s diplomatic missions overseas. The Speaker focused on the security environment, regional and global concerns, and Georgia’s foreign policy priorities. He claimed that 2022 was a challenging year for international relations and that it was in this challenging environment that Georgia had to focus on preserving its borders, growing its alliances, and fostering regional stability, security, and prosperity.

The Speaker focused on the process of European and Euro-Atlantic integration of Georgia and the efforts made by the state on this path. Shalva Papuashvili thanked the Ministry of Foreign Affairs and the heads of Georgian diplomatic missions abroad for their work.

“The relationship between Georgia and the EU in 2022 will go down in history. The European perspective that is acknowledged by the European Union has securely sealed for the future Georgia’s long-cherished sovereignty and independence, which is the legacy of our ancestors and generations. The state was well-prepared to take on this challenge. The entire nation got engaged after the application for EU membership was submitted. We were able to independently complete the membership application in the least amount of time possible because state agencies and civil employees operated at the highest level. We carry out the EU’s proposals with the same level of accountability. We made a significant effort, analyzing the legislative frameworks and practices of Georgia and other nations, initiating, debating, and adopting essential amendments with the help of the Georgian Parliament, state institutions, and civil society. In 2022, the Georgian Parliament passed 30% of the laws necessary to implement the EU’s recommendations. We will conclude a number of documents at the spring session, including the draft laws that were given to the Venice Commission and the OSCE Office for Democratic Institutions and Human Rights for review. We anticipate that the European Union will recognize this work in a proper manner,” Papuashvili remarked.

The Speaker dwelt on the transport and transit role of Georgia and the potential of the country in the energy security of the European Union. He also noted the importance of deepening bilateral cooperation with various countries and the achievements of active parliamentary diplomacy. In his speech, Shalva Papuashvili touched upon the assistance provided by Georgia in terms of political, diplomatic, and humanitarian support to Ukraine.

“Georgia gave Ukraine and the Ukrainian people significant political, diplomatic, and humanitarian support. Georgia will look on the bright side of freedom in the future and continue to assist Ukrainians fleeing war and damage in this trying time, despite frequently unjustified criticism. There was no direct peace in our region due to the ongoing major conflict in Ukraine. Through collaborative legislative efforts with Azerbaijan and Armenia, which are necessary for the development of our region, we would like to further contribute to peace and stability,” Papuashvili clarified.

Tags: Speaker of the Parliament
ShareShareTweet