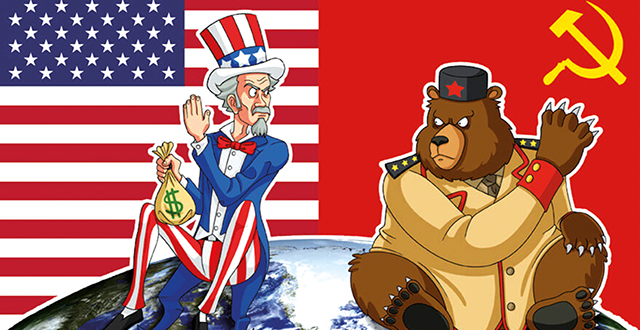 Nobody could have envisaged in the wildest of human imaginations that the stronghold of socialism and the citadel of communism, the USSR, would so quickly and easily collapse and be wiped off the surface of the earth, but it happened indeed. And it happened so unexpectedly that the world could not even realize how the forcefully created geopolitical giant disappeared in just two shakes of a lamb’s tail. Meanwhile, the United States of America, the Soviet Union’s sworn enemy, reached unbelievable heights of bliss and prosperity, certainly having had a considerable say in the destruction of the evil Bolshevik empire.
Whatever took place in reality, I refuse to believe that the Americans gloated over the misfortunes of the soviet people. I now wonder if the former soviets, especially the Russians, are having a ball watching the way the US is so recklessly burring its famous democracy, the subject of their pride in the last quarter millennium. Amazingly, I am now hearing the occasional but persistent talk that the stronghold of unity and the citadel of democracy, the USA, might disintegrate into a number of new independent states, as has recently happened in the country of soviets.
Analogically, I will never believe that the former soviet people want to celebrate the current socio-political strife of the great American nation. The soviets gagged their citizenry the entire period of their existence, but looking at today’s America, where the media multibillion monsters are stifling free speech, one might forfeit the sense of distinction between Soviet and American technicalities to keep their subjects mum.
The famous quote ‘freedom of the press is guaranteed only to those who own it’ was true in its whole capacity in the land of soviets because the government owned everything, including all existing means of mass communication and us the humans into the bargain. Unbelievably, the same is true in today’s America, because they are bizarrely emulating the soviet style of perpetuating the freedom of speech as a dissent from a democratic way of life and spontaneously open communication. We, the soviets, have always been terribly envious of Americans for almost everything that made up human life, be it the standard of living, freedom of speech, freedom to carry arms, cars, bars, movies, music, clothing, food and what not. Right now, the former soviets, and currently liberated citizens of their respective newly-created countries, have stopped envying Americans, thinking that the difference between the two nations is no longer that noticeable.
It is interesting that most journalists, on both sides, characterize Soviets and Americans as ‘arch rivals, fierce adversaries, worst antipodes, diametrically opposed political cultures, feuding economic powers, irreconcilable antagonists, dramatically clashing powers’ and so on and so forth. They might be, but they are also similar in many different aspects. To continue the list, I would throw in their attitude to the main law of the land. The soviet people have never taken their constitution seriously. It was just a rubber-stamped piece of paper. We didn’t even know that there was such a written document. Conversely, the Americans treat their constitution with biblical honor and veneration, although when it came to a crucial instance like the impeachment of the POTUS, the strength and the durability of one of the greatest documents in history faltered.
And finally, the means of mass communication! The entire soviet media, without any exclusion whatsoever, would adamantly mainstream dancing only to the tune of the communist party directives. Most of the American media has not gone far beyond this type of dedication to a partisan line. Both nations had a nasty habit of invading other lands, one desiring to export communism and the other to impose their style of democracy on other peoples. Afghanistan alone would suffice as an example.
The analogues and coincidences are absolutely amazing, but with God’s grace, some differences between these two decision makers of the global level are still in place, like the fact that the Soviet Union surrendered to America in that notorious Cold War whereas the United States achieved everlasting victory. Now the dilemma is if those Soviet-American analogous features will end up as something good or bad for the watchful world.