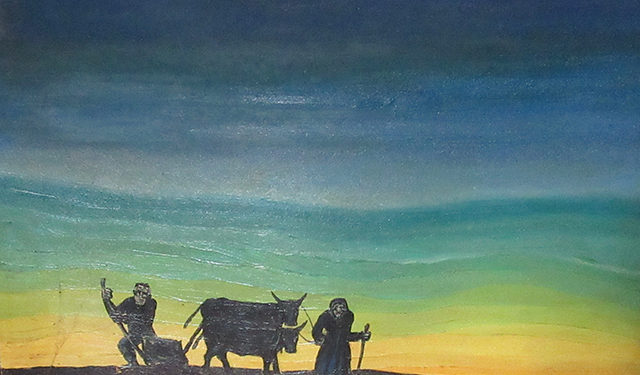 Budu Sirbiladze belongs to the generation of Georgian artists who confronted the official Soviet art of the late 1950s and early 1960s and has brought forward national themes in their works, as well as mastered the painting style of Western European modernist art.

Budu Sirbiladze was born in Kutaisi on January 8, 1937. In 1938, the family moved to Tbilisi. In 1952-1958,  Sirbiladze studied at the I. Nikoladze Art School in Tbilisi, where his teachers were Kote Kiknadze, Grand Maestro Valentin Sherpilov, and Gibson Khundadze. From 1958, he continued his studies at Tbilisi State Academy of Arts in the Faculty of Painting. There, he studied in the studio of the famous artist Korneli Sanadze, and his painting teacher was the famous artist Vasil Shukhaev. Budu Sirbiladze graduated from the Art Academy in 1964. His dissertation theme was “The Granite Quarry”. 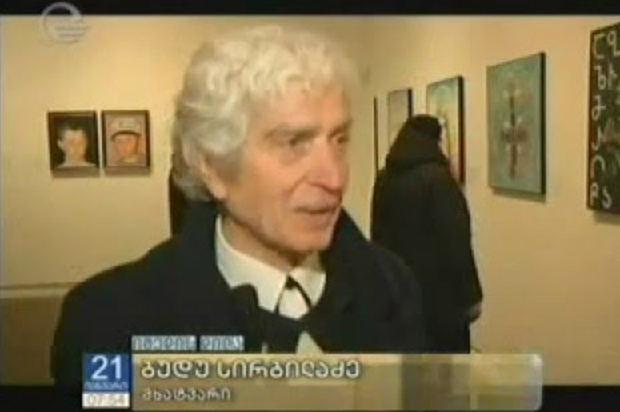 Budu Sirbiladze’s work reflects the history of Georgia. The artist dedicated a painting series to the Georgian alphabet, which is one of the oldest among the 14 alphabets in the world. In particular, he created a separate pictorial composition for each letter, a painting series that is unique and inimitable in Georgian painting. Graphic series depicting the Georgian alphabet, of course, have been created by many graphic artists who have worked on the font or design of the “Mother Tongue” – a guide to learning the Georgian alphabet. But Sirbiladze’s paintings present a unique geometrical outlines of Georgian “Asomtavruli “script, which are distinguished by great accuracy. 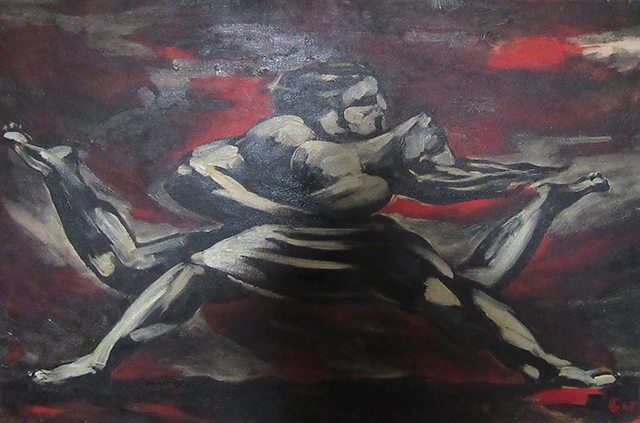 In addition to easel painting, Sirbiladze worked in cinematography from the very beginning. In 1965, he was the art director of a short feature film by O. Abesadze.

In 1966, the 800th anniversary of Shota Rustaveli was celebrated in Georgia. Budu Sirbiladze took part in the exhibition dedicated to this anniversary. In 1967, the first personal exhibition of the artist was held at the House of Art Workers in Tbilisi. In 1968, the second such exhibition was organized in the exhibition hall of the Georgian Society for Friendship and Cultural Relations with Foreign Countries. 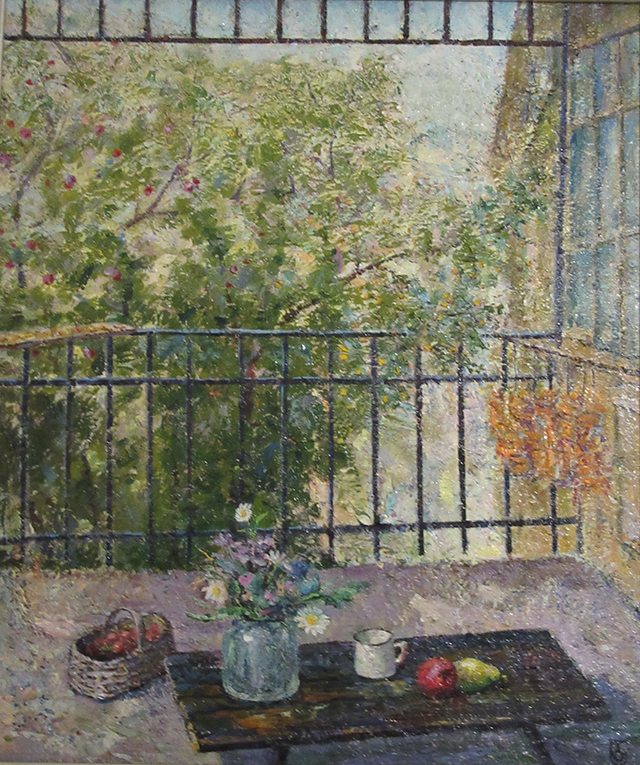 In 1968, he became a member of the Georgian Artists’ Union.

In 1970, the third personal exhibition of the artist was held in the exhibition hall of the Publishing House of the magazine “Smena” in Moscow.

In 1970, Budu Sirbiladze was invited by movie director Soso Chkhaidze as an art director for the film “Georgian Hymns”. The film was a great success both in Georgia and abroad and became a laureate of many film festivals. The artist also contributed to this success. 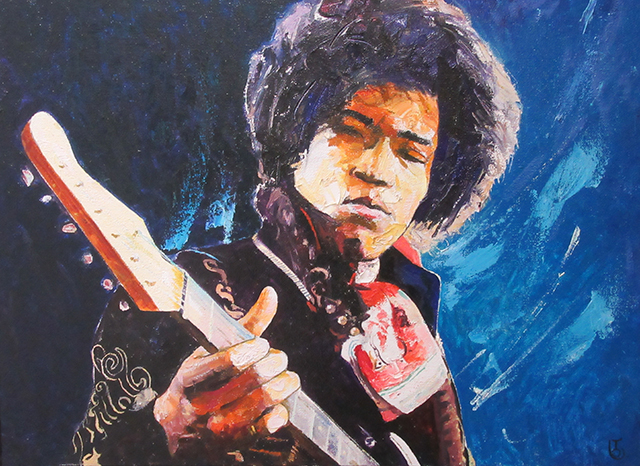 In 1973-74, Sirbiladze worked fruitfully in Borjomi. In the foyer of the Borjomi Administrative House, he created a panel on the theme “Man -the Creator”. In addition, a medal of an honorary citizen of Borjomi was created based on the artist’s sketch. The relief sculpture of Borjomi mineral waters “Borjomi Water” was built in Borjomi.

Budu Sirbiladze’s fourth personal exhibition was held in 1981 in the “Artist’s House” in Tbilisi. In 1985, an album of the artist’s works was released.

In 1988, his fifth personal exhibition was organized in the “Artist’s House” in Tbilisi.

Landscapes depicting the views of Tbilisi and the regions of Georgia are created with special skill in Budu Sirbiladze’s work, illuminated by colors saturated with the scorching southern sun.

Budu Sirbiladze’s sixth personal exhibition was held at the exhibition hall of the Georgian representation “Mziuri” in Moscow in 1990. 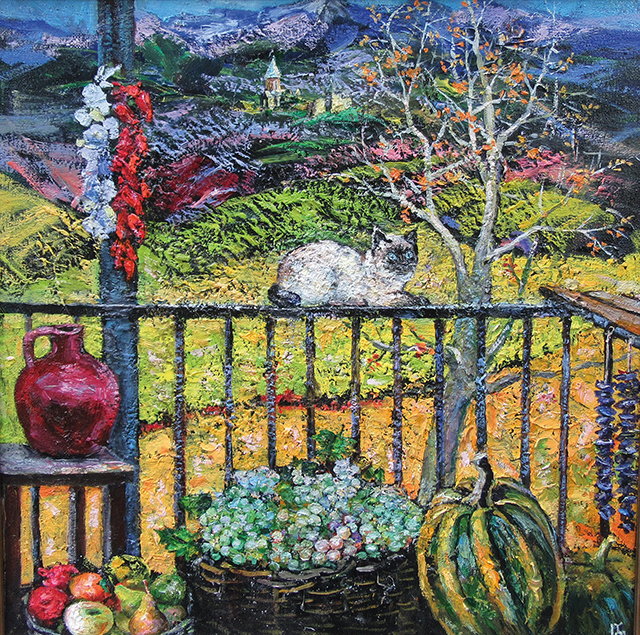 Portrait genre holds a special part in Budu Sirbiladze’s work. The artist created portraits of historical figures as well as pictorial compositions of artefacts related to their names, such as: the image of King Parnavaz in the series dedicated to the Georgian “Asomtavruli” alphabet, the image of Queen Tamar’s magnificent golden cross (The world’s oldest “living” pearls as well as natural emeralds and rubies are used in Queen Tamar’s cross); a portrait of Iakob Gogebashvili, the creator of the Georgian “Mother Tongue” textbook; a portrait of the famous Georgian poet Akaki Tsereteli; a portrait of Prince Niko Buri-Bagration-Mukhraneli; He also painted portraits of his contemporary (deceased) public figures: Merab Kostava, Zviad Gamsakhurdia, Alexander (Lali) Javakhishvili, Chabua Amirejibi, and Sergo Nadimashvili.

The gallery of the artist’s portraits includes portraits of the Catholicos-Patriarch Ilia II, princess Ia Bagration-Mukhraneli, the artist’s wife- the artist Manana Gigineishvili and the portraits of other famous people. All these portraits are characterized by a deep psychological access to the nature and a rich, pictorial manner of depiction. Sirbiladze paints children’s portraits with special love and skill. 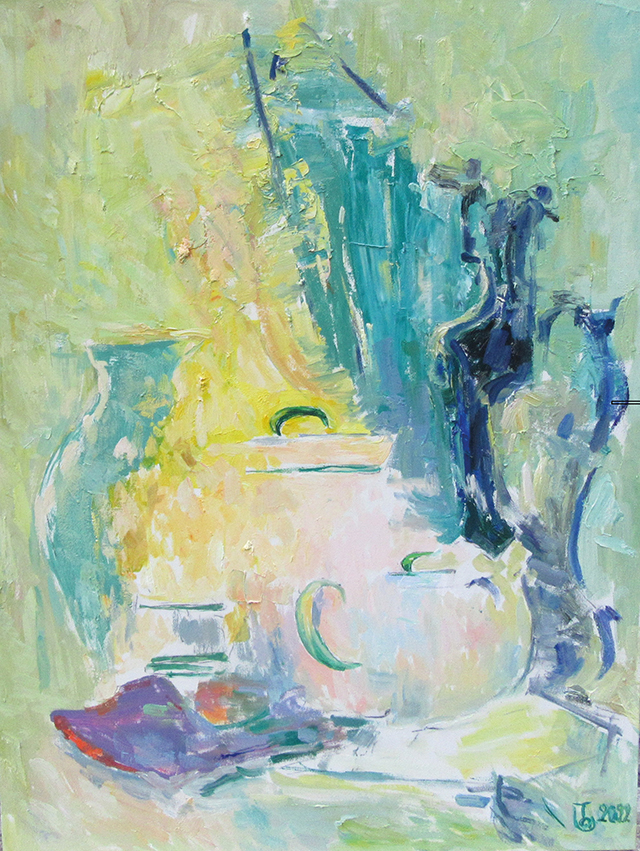 In 1991, Sirbladze took part in the exhibition of Georgian artists held in Austria.

Budu Sirbiladze created models of memorials of Georgian public figures: Zviad Gamsakhurdia, Merab Kostava, Platon Gigineishvili, and Sergo Nadimashvili, which have not been realized yet.

In 2019, the publishing house “Griffon” published the album of the artist’s works.

In 2021, an album of the artist’s works “Search for Color, Line, Shape and Architecture” was published.

The depiction of the universe, space, celestial lights and their dynamics took a particular part in the artist’s work. The works of these series are characterized by the variety of colors and pastoral nature.

From 1991 to date, Sirbladze has been a member of the board of the Georgian Noble Council and the chairman of the “Royal Palette Association of Artists”, under whose auspices many exhibitions of Georgian artists’ works have been organized throughout Georgia.

Budu Sirbiladze is an Honored Artist of Georgia and continues his creative work with his usual devotion with his wife- artist Manana Gigineishvili in their apartment-workshop. The elderly artist works with the youthful inspiration every day from 6 am and keeps creating new masterpieces of Georgian painting.

Budu Sirbiladze’s works are kept in Georgian museums, as well as in private collections in Georgia and abroad.