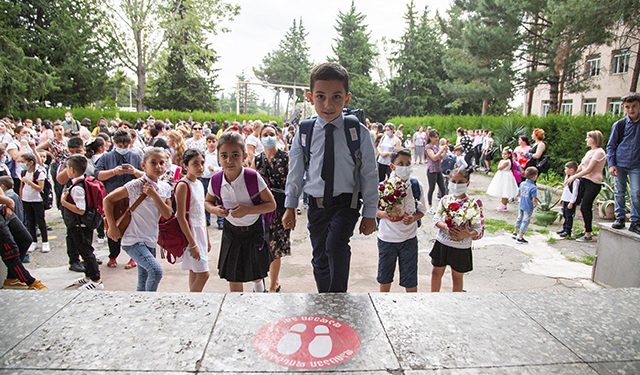 Congrats! The new academic year kicked off this Thursday in Georgia, and all of us students, teachers, parents, and the government too, are poised to crank it up in readiness for a productive give-and-take in the name of the knowledge deemed to be translatable into our wellbeing someday in the future.

In times gone by, the First of September was the day of academic bliss and celebration, a fact which is hardly remembered by this generation of school boys and girls. It was a day of returning to school from long and happy summer vacations; the noticeably grown, relaxed and suntanned kids embracing each other with love and delight. It was a day of renovation, reinvigoration and the reestablishment of standards and ways, as well as the introduction of new plans and intentions. It was a day as powerful as New Year itself in its symbolic or materialized commencement of new life, with refreshed resolutions to come true as the year went on. The First of September was a big day all over the big Soviet Union.

Incidentally, that is one tradition that still unites the plunged-in-hatred Russia and Ukraine, the First of September. They both started the new academic year on the same day, a reminder of the good old times.
For some unclear reason, a few decades ago, it was decided to change the First of September to the Fifteenth. The good old tradition, so socially important, for some reason turned out impossible to maintain. Nobody knows why it was so bad that it had to be abrogated in a twinkle of an eye. Was it too overly soviet to keep in place? What was so wrong about it that it had to be hung in effigy and banned from academia?

It is certainly too late to be maudlin and poignant about the lost treasure and pleasure, but happy reminiscences are not yet prohibited in the world, and dreams still have a way of coming true, so let’s hope that history might repeat itself. Let’s now have what we have and enjoy it, and that is the Fifteenth of September. After all, the physical date for restarting the new academic year should not be that significant in terms of acquiring a qualitative education and the skills that might matter much for survival.

There is no doubt that for academic success, the first and utmost component of life must be a student’s behavior and attitude to the utterly complicated process called learning, the strongest prerequisite for development. Of course, teachers and parents, and their unity in an auxiliary body like a PTA (parent-teacher association), popular in the West, have their irreplaceable role in modern schooling, but in our extremely accelerated time of informational freedom and endlessness, the bulk of the educational burden is laid on the fragile shoulders of our young knowledge-seekers.

This is why I feel like applying to those adolescents and teenagers who have found themselves in the avalanche of the informational glut, sucking it in or tossing it aimlessly away on the crest of foamy waves: Please don’t be sure that the bright future depends only on modern-day scholarly training and persistent familial guidance. Grab the knowledge, wrapped in the cover of the daily imposed information, think well what you have to do with it, filter it, fathom its quality and necessity, educate yourself all by yourself, learn how to make independent decisions, and start living the way a contemporary man and woman should. But watch out: this said, also be aware that what parents and teachers are telling you might be just as valuable, heed their wisdom and experience, get well versed in what they suggest, look for the rationale in their statements and precepts, and use them to your benefit, but don’t let anybody think that your own opinion and attitude has less value than theirs. This is what qualifies as justice and intelligence put together. Life will dictate the rest of it, and you will digest it better and easier because you will already have the skills you need under your belt.