Sheraton Tbilisi GM, Iva Trifonov: You Don’t Have to be Crazy to Work for Us, but it Helps 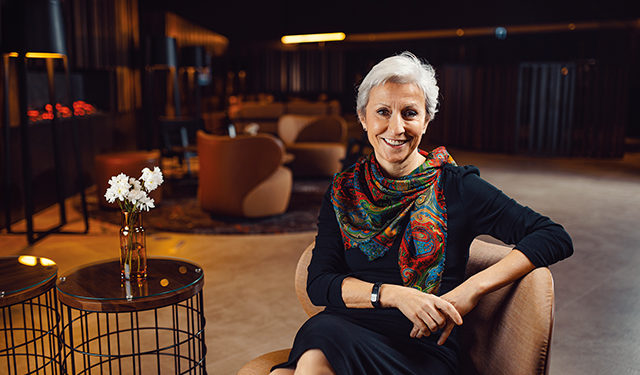 Iva Trifonov, General Manager at the Sheraton Grand Metechi Palace Tbilisi, was very excited about coming to Georgia, she tells GEORGIA TODAY in an exclusive interview.

Her previous assignment was in Amman, Jordan, also as a GM. She is originally Bulgarian, born and raised in Sofia, and joined the hospitality sector by chance. In fact, she wanted to become a pilot like her brother, but they wouldn’t take women on at the time, so she joined the airline as an air hostess instead.

“I thought, I can’t fly the plane, but at least I’ll fly on it,” she tells us. “And then there was an unfortunate air crash in Bulgaria, after which they said family members couldn’t work together or fly on the same plane. So, obviously, my brother stayed and I had to leave.”

Trifonov found out the first Sheraton behind the “iron curtain” was looking for English speakers. Having attended an English school and studied English philology, she decided to give it a try. She was impressed by Sheraton from first sight.

“It was a spectacular building in the city, built in Communist times, right after the second world war, and reflected all that Soviet glamor,” she says. “Inside, it was absolutely fantastic: high ceilings, chandeliers and golden glitter.”

Half an hour after arriving, and despite having no experience in the sector, she had a job, first in housekeeping and then slowly moving up the ranks. That was 37 years ago.

“I got to learn a lot more about the industry. I realized with my humanitarian education, I still needed to up upgrade, so I did economics and then I went to Cornell for a while in the States and little by little I built up my career, I knew I had to go abroad to really make a difference, because if you’re ‘home-grown,’ it’s like you’re still secondary. And if you go to a foreign world, you go not only to operate, but to train and develop local talent. I think that’s the key of the game, and whoever operated here [at Sheraton] in Georgia obviously did a good job. For our hotel in particular, I’m sure there’s lots of potential.”

From housekeeping to front office and then reservations, Trifonov then took on a new skill set when the company created a job needing knowledge of statistics and analytics to improve the business.

“I did that for almost three years. It was the first time I realized how difficult it is to manage people or to make people do the things you want them to do without being their boss, which obviously requires certain skills that you acquire, if you are as goal-driven and ambitious as I am.”

She tells us she sees the hospitality sector as “fascinating.”

“It’s an industry that allows for the fastest track up the hierarchy if you work hard, if you have the right attitude. All that it requires is that you really live with it, that you are passionate about it, and that you’re a people’s person. And yes, you have to be smart, too. We have an enormous amount of opportunity, and because we are hungry for talent and are expanding so dramatically, there are always more positions and places for people to work.”

You have experience working in different countries. How familiar were you with Georgia before your visit? Has it met your expectations?
If you choose to go to a country, you need to look for the best in it. I worked in a number of countries and with various foreigners, and one thing I hate is complaining about the country you are in. If you don’t like it, pack and go. Nobody forced me to come, it was my decision.

Maybe because my past 5 years were in the Middle East, what I find very refreshing here, first of all, is that there are a lot more women working in the industry, lots of female Georgian GMs, and even inside our hotel we have 60% female employees.

The other thing that I’ve found is that people I have met so far are very intelligent and highly educated. Most of our staff speak three languages – Georgian, English and Russian, which are very different from each other. Georgians are also very curious about other people, in a nice way. Because of being in the countries where I was never asked where I came from, I find this curiosity here nice.

The hotel itself is also a blessing; it was recently renovated, has an enormous reputation, it’s been here for 30 years, and I think it has changed probably 6 or 7 general managers over these years. I knew some of them, some of us actually worked together. One Bulgarian GM that worked about 10 years in Tbilisi had the best ever results, according our annual surveys, and I asked him how he made 99% of his people happy, and he told me: it’s very simple, Georgians are very friendly, they need understanding and attention, so I just talk to all of them.

I came in November, but from what I see and what I’ve heard, I think there are quite a lot of similarities between Bulgarians and Georgians in terms of how we perceive the world and in humor; we are on the other side of the same sea, we both have mountains and we knew how the life we had was once worth nothing or very little.

Back during Soviet times, Georgian culture was strongly promoted, so we Bulgarians were introduced to Georgian movies, music, dances. As soon as I have a chance, I plan to go and visit all the museums and theaters and appreciate Georgian art as much as possible.

You don’t have to be crazy to work for us, but it helps, because who in their right mind would join an industry that works when everybody else is having fun?

The pandemic hit the hotel business hard, as it did the service sector in general. How did Sheraton overcome these challenges and what could have been done differently?
This hotel in a way was both lucky and unlucky. It re-opened in 2019, and it was just gaining momentum after its four-year closure, and then Covid-19 struck. I think they were closed for a month and then became a quarantine hotel which was hard for our young employees so used to serving guests. But the hotel still organized concerts and events to entertain people staying here.

A lot of the employees were on temporary contracts, so my predecessor had to let them go, because we couldn’t possibly sustain that, financially. But it was a very wise decision not to close completely, because if you let them all go, how can you bring them back?

In my previous hotel, we did it slightly differently, but we had a very strong owner’s spot, so I can’t really judge whether anything could have been done differently. All I can say is, I was spared this very difficult task to say goodbye to people.

How have you kept your staff motivated and your guests confident in their safety?
One thing this crisis taught everyone, especially in our business, is that you can’t be only a waitress; you need to help maybe front office or assist security, too. And once this starts happening, people see the other side of the job, and bond more. That’s the kind of atmosphere I’m trying to nurture here.

We often have to go to our guests, explain what works, what doesn’t, apologize, make their stay as comfortable as possible, because regulations impose certain things; with a curfew people can’t go out, and, honestly, we all find it very difficult. We have to lock guests in at 9 o’clock. It’s outrageous: the restaurant’s closed, only room service, guests eating alone. It really goes against my nature as a hotelier to impose such measures, and we try to explain it’s not us, it’s the regulations. Some people are more understanding than others.

The pandemic is not over yet. What are your future plans as the new GM, and what are your expectations for the upcoming year- in Sheraton, and in the Georgian tourism sector as a whole?
Georgia’s doing extremely well at the moment in terms of the number of infections. The question is, what will happen once you start open the doors? It’s hard to predict, and there’s still a long way to go. Based on the trends around the world, we’ll not recover by the end of this year. So we need to be braced for yet another year of strong restrictions and limitations within the hotel.

If business isn’t good, you can’t invest elsewhere; you can’t run trainings, you can’t entertain, do team-building activities, or raise salaries, and I think everybody understands that. What I hear from my staff is that those who have managed to retain their jobs are appreciative of the fact. It’s enough to look out the window and see people sitting without a job for quite some time yet having families to feed and obligations to meet.

What about your family?
They say behind every successful man there is a strong woman, I’d say behind every successful woman there is a strong man, and that is the case in my family. I have one daughter. She lives in Bulgaria. My husband was very kind, and chose to sacrifice his own career to move with me. If not for his help and understanding, I wouldn’t have managed it. I’m not saying this is a recipe for success, but it really takes two to tango, otherwise it won’t happen.

Is there anything else you would like to share with our readers?
I have my favorite quote for you, which I do it at every orientation with new staff: you don’t have to be crazy to work for us, but it helps, and that’s because, who in their right mind would join an industry that works when everybody else is having fun? Because we do Christmas, and New Year and Sundays, and everybody wants to have time off. These days, the world goes “9 to 5”, and we go 24/7, and that is sometimes difficult, especially when you have a family, and if you are a woman in particular, because you are expected to cook dinner or serve the mother-in-law, and you’re not there. We are busy when everybody else is not.