Shalva Papuashvili: From Representatives of Every Member State We Heard Supportive Words for Our Aspiration to NATO 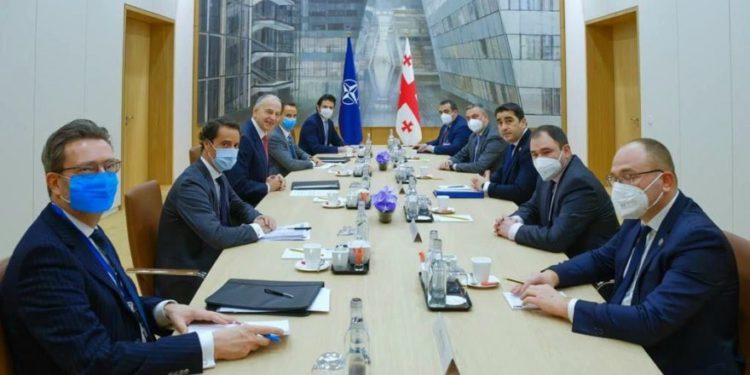 Chairman of Parliament Shalva Papuashvili is holding the meetings in NATO’s Brussels headquarters as part of his first official visit.

Papuashvili met with the NATO Deputy Secretary-General, Mircea Geoană, and participated in the meeting of the NATO-Georgia Commission (NGC).

The Chairman of Parliament delivered a speech at the NGC sitting, speaking about his plans on the enhancement of parliamentary oversight and democratic reforms.

He noted the representatives of every member state expressed their support to the territorial integrity, sovereignty and NATO aspiration of Georgia, thus reaffirming the NATO open door policy.

“At the NGC sitting, from the representatives of every member state, we heard supportive words for the territorial integrity, sovereignty and NATO aspiration of Georgia, thus reaffirming the NATO open door policy and that Georgia will soon access NATO. It is important that soon Madrid will host the NATO Summit with an agenda including the new strategy of NATO, in the development of which Georgia takes its place. They offered us the opportunity to introduce our proposals. I believe this strategy will be crucial to reflecting the Black Sea security issues, the membership of the aspirant states and countries, and to reaffirm our perspectives and messages,” Papuashvili stated.