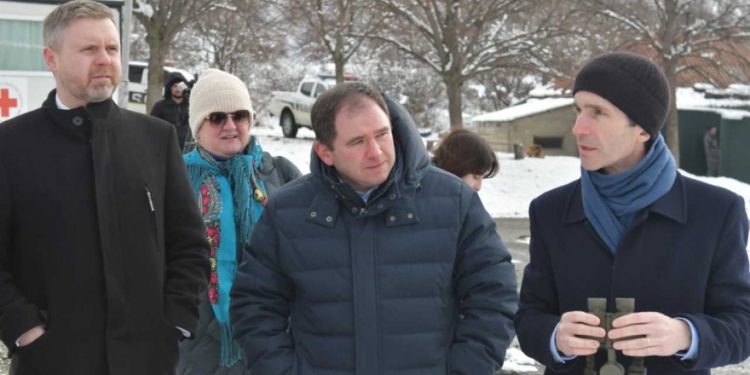 The Chair of the Foreign Relations Committee, Head of the OSCE PA Committee on Democracy, Human Rights, and Humanitarian Questions, Nikoloz Samkharadze, together with the OSCE PA Delegation, visited the occupation line in the village of Odzisi.

Samkharadze informed the representatives of the delegation on human rights and the general situation in the occupied territories of Georgia.

“The members of the OSCE Parliamentary Assembly learned about the situation in the occupied regions both in terms of human rights and generally during our visit to the occupation line in the village of Odzisi. They learned about the harsh situation faced by ethnic Georgians in the occupied territories and the plans the Russian Federation has for annexing these areas. For the inhabitants who lost their homes in the Tskhinvali region and in Abkhazia, this refers to the restriction of the right to move as well as the prohibition of the right to return to their residences. The Committee’s report will consider all of this, and the topic will be considered at the OSCE Parliamentary Assembly’s annual session. This visit’s primary objective is to learn more about the state of human rights in the occupied areas,” Samkharadze stated.

“I believe it is crucial to get firsthand knowledge of the situation on the ground. Information about the existing state of affairs and the population’s constraints on their freedom of movement has been provided to us,” the Deputy Chair of the OSCE PA Committee, Farah Karimi, stated.