SABUKO to Ensure Harmonized Human–Nature Relationship on Kakheti Steppes: Balancing between a Living Landscape or a Future Desert 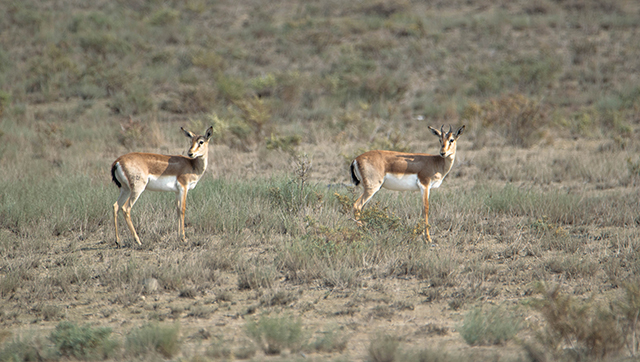 The Georgian steppe, spanning the area between the Iori and Alazani rivers, hosts a unique mixture of Palearctic, Indomalayan and Afrotropical fauna, including jackals, wolves and vultures. It was once home to the elusive Caucasian leopard. The steppe has been used for millennia as winter pastures by semi-nomadic pastoralists, with tens of thousands of sheep, but a combination of climate change and the increased number of grazing livestock is causing the degradation of this fragile habitat.

To improve the dire situation on the ground, the organization SABUKO (Society for Nature Conservation and Birdlife Partner in Georgia) has been implementing the landscape restoration project since January 1, 2019, with the support of the Cambridge Conservation Initiative. As part of the project, the organization developed a rotational grazing scheme, which noticeably improved the grass cover condition on the ground.

Following the successfully implemented first phase of the project ‘Restoring Gallery Forest and Grasslands in the Iori River Valley,’ now, SABUKO, along with its partners, is launching the second phase, which will build on the progress made by the completed ELP-funded Iori River Valley project, scaling up grassland restoration and continuing work with the pastoralist community to recover and to reconnect wildlife corridors from Kakheti to Vashlovani.

Livestock grazing determines the rise or demise of biodiversity in these steppe landscapes. Previously, ELP funded experimental rotational grazing in the Chachuna Reserve with promising results. Following that experience, together with its Georgian BirdLife Partner SABUKO, the Endangered Landscapes Program will scale up grassland restoration to 25,000 ha.

The goal of the project is to preserve the steppe and semi-arid landscapes between the Iori and Alazani rivers in southern Georgia, and restore wildlife, ecosystems and cultural values unique in Europe.

However, the implementation of these goals depend on several points, such as stopping the degradation of grasslands, connectivity of eco-corridors and reduced poaching and other pressures on wildlife. 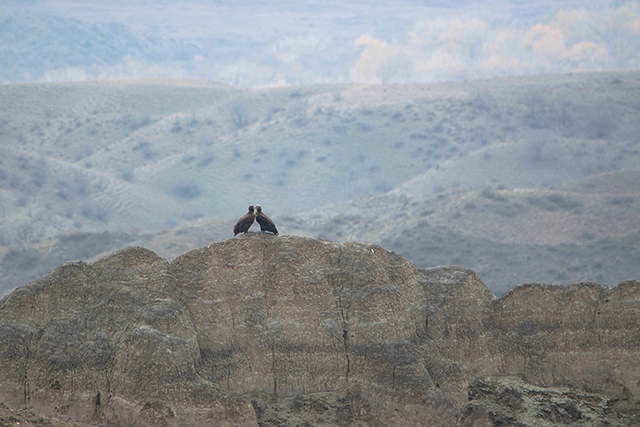 Over five years (2023-2027), the project “The Kakheti Steppes: Balancing between a Living Landscape or a Future Desert” is expected to achieve three positive outcomes for the Iori Plateau – Vashlovani plateau:
• 500 km2 of steppes grazed sustainably by wildlife and livestock and managed for climate change adaptation;
• 1000 km2 of core areas and corridors of suitable habitat conserved across the landscape so that connectivity of wildlife populations is guaranteed;
• The future of ecologically sustainable rangeland management in Georgia is secured through successful knowledge transfer, increased financial sustainability and raised awareness.

The first stage of the project covered the Chachuna Managed Reserve located in Georgia’s Dedoplistskaro municipality, which has faced a severe problem of degradation due to unregulated grazing, while the second phase covers Chachuna, Kotsakhura Range, Samukhi Valley and Vashlovani Protected Area, covering a territory of 25,000 ha in total.

To find out more about the second phase of the project implemented by SABUKO and its expected outcomes, GEORGIA TODAY spoke to several members of SABUKO.

Tinatin Arveladze, Policy Manager: “This is the second phase of the project. During its first phase, we worked in the Chachuna Reserve, while the team responsible for policy was mainly focused on pastures. The problem was that both in the territory of Chachuna Reserve and its surrounding state-owned areas, sheep moved chaotically and there was no regulation at official level to monitor this issue. The legislation regarding pastures was very general- there were no relevant normative acts. The management of the Agency of Protected Areas tried to control the process, however, resources were not enough. To solve this problem, the SABUKO team arranged a fence on the spot to prevent the chaotic sheep movement and grazing. The legislative change was adopted on 6 October 2021. SABUKO contributed to this process even prior to introduction of the legislative regulation, as it developed a rotational grazing scheme. Adopting the legislative act was a big goal for SABUKO. However, its implementation in practice also depends on the will, enthusiasm and work of locals and the Agency of Protected Areas. Protecting and restoring biodiversity is also a matter of each shepherds’ personal responsibility.

“Now, starting the new, second phase of the project, we can boldly say that we’ve already got a foundation for future activities and, based on the experience gained during the first phase, we know what needs to be changed and improved. Our main goal will be to show the local shepherds the necessity for sustainable use of pastures. Moreover, we’ll do our best to ensure that their interests and needs are also protected.

“Sustainable use of water resources will be also an important part of our agenda. As such, we’ll work to ensure that Dali Reservoir and River Iori are not perceived as only a means of irrigation and more emphasis is made on their conservation.

“We’ll also pay attention to the status change of agricultural lands. There are often conflicts regarding the use of land resources and their sufficiency. As such, we’ll work to ensure that those lands identified as “important” in terms of biodiversity are not used improperly,” she noted.

Tinatin added that SABUKO will also focus on the Emerald Network Sites located in the project area and develop plans for their sustainable management, in addition to solving issues related to environment and sustainable use of natural resources on the spot.
German expert Marinus Gebhardt, a Natural Resources Manager, welcomed the fact that, as part of the new phase of the project, the SABUKO team will not only be able to continue work in Chachuna Reserve, but to expand the study area to Samukhi and Vashlovani, a big complex of winter pasture in Georgia.

“Winter pastures are the areas where degradation mostly takes place, so we’re really happy to be able to expand our studies and activities now to Chachuna, Samukhi and Vashlovani, thanks to Endangered Landscapes Programme,” Gebhardt says. “Now, we’re stepping in the second phase, which is an important opportunity. Our main focus is to care not only about the nature, but also about the people living in this nature. As such, this project is a chance to promote sustainable land use among the local shepherds and the population as a whole.

“Another thing we really facilitate is that the state cares more for that pasture. We plan to make a pasture degradation alert system integrated within a platform, so the state can see what is really going on on the pasture, which also contributes to better leasing contracts and so on. SABUKO really contributes to better understanding of pastures. Forest is very inventoried in Georgia, but pastures not, so there’s a lack of knowledge about them. This project will contribute to expanding and improving this knowledge, too,” he said.

Giorgi Chikorashvili, local coordinator, notes that the second phase of the project SABUKO has started is important for both nature, environment and socio-economic conditions in the region.

“In the first part of the project, SABUKO achieved tangible results by introducing rotational grazing, which was also well visible for the local population; they saw that the green grass cover around them was improved, which is very important work for them. Harmonized relationship between humans and nature is the main principle of this project, and we, the SABUKO team, are doing our best to implement it properly and bring even more benefits to the local environment and residents,” he pointed out.

Apart from being a local coordinator, Chikorashvili, along with his colleagues, is also involved in the parliamentary agrarian group, working on issues related to pastures, such as grazing methods, etc., to strengthen the pastures management legislation at the state level and raise awareness about the importance of their sustainable use among the population.

In the second phase of the project, the role of education has increased. 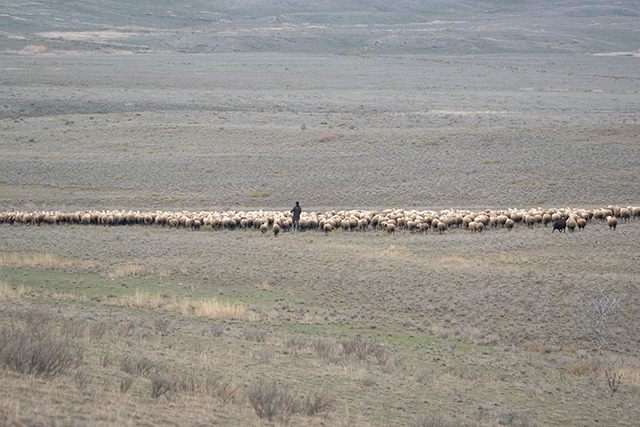 Gvantsa Bragvadze, Education Program Manager, notes that one of the most important innovations related to the project is the youth grant, the purpose of which is to provide practical knowledge and experience for young people interested in conservation. ELP will finance 3 to 5 projects annually until 2027.

“Local researchers and activists between the age of 18 and 25 will be able to participate in the grant competition, and will be mentored by SABUKO. The duration of each project will be from 3 to 6 months,” Bragvadze tells us. “We have several target groups. Planned activities include questionnaires to assess where we lack information and working and informational meetings with farmers, shepherds, representatives of the municipality, and employees of the administration of protected areas. For instance, one of the tasks of the project is to advocate for the process of harmonization of Georgian legislation with the EU Water Framework Directive, for which we will work together with SABUKO’s policy direction team in workshops with representatives of the municipality.

“In addition, together with the communication team, we are trying to ensure that many people have the right information about Chachuna and the project. We’re also preparing informational materials about Chachuna,, floodplain forest and its biodiversity – booklets, posters, materials for teachers and guides for different target groups. For example, in the first phase, a board game was created for students “Playing in Iori Floodplain”, which is very informative and fun. Students not only get information about pastures, biodiversity, but also deal with the real problems farmers are facing.”

Londa Beria, Communications Manager, claims that in the new phase of the project, just like in the first, one of the main focuses will be put on the local people – farmers, shepherds, land owners, because the sustainable management practices of pastures and land resource use should be followed by as many of them as possible. Therefore, she says, the SABUKO team is going to spend a lot of energy on communicating with them and bringing them the benefits of the plan. Also, they intend to bring their opinions to the decision makers and ensure that this communication actually takes place.

“Chachuna Reserve and its biodiversity, its species, landscape and problems have come under the attention of many people over the years. People began to show their support by offering to help, participating in field trips, donating to purchase equipment for researching the species, buying tickets to a movie about Chachuna, and other forms of support. In the new phase, we will try to create a similar emotional connection with people towards new areas, especially the areas of Kotsakhura and Samukhi, other species common here.

“In the new phase, we will try to make the project and its results visible at the international level, because the plan that was developed with us, if it works as successfully, can be used to manage and protect other protected areas. There is also a great interest in individual species, especially when it comes to vulnerable species, for example, the lynx, and we will try to raise attention of other important issues with these topics,” Londa told us.

Over the next five years, the SABUKO team, thanks to its donors and partners, will continue to spare no efforts to revitalize the ecosystem, ensure a harmonized relationship between humans and nature, and improve the socio-economic conditions of locals, this time on an even bigger operating area.