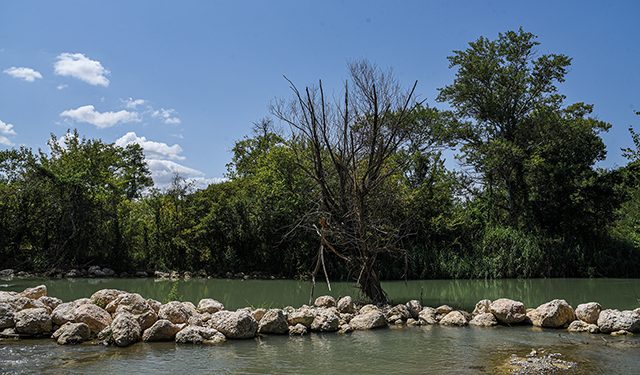 Floodplains are a special and vital part of the ecosystem, and floodplain forests contribute many free ecological services to our society, being home to a diversity of wildlife.

SABUKO – a nature conservation organization, a local partner of BirdLife, has played a big role in the restoration and preservation of floodplain forest in Georgia as part the project ‘Restoring Gallery Forest and Grasslands in the Iori River Valley,’ aimed at revitalizing the ecosystem.

They also work to preserve the biodiversity of the Chachuna Managed Reserve, which has faced a severe problem of degradation due to unregulated grazing.

SABUKO and its partner organizations are actively working to preserve endangered rare species of wildlife existing on the ground.

The Dali Reservoir posed a threat for Chachuna. The study concluded that the lower part of the river should be flooded more often, as a process of desertification is underway there. The river bed is being washed away and intensive deep and lateral erosion is taking place, the bed is deepening, and the small amount of water released by the Dali Mountain Reservoir in the lower basin cannot ensure flooding of the area, so vegetation is changing and being replaced.

To solve this problem, a gabion has been arranged on the spot, which will slow the water flow, raises the water level mark and allow the area to be flooded.

Through such measures and gabions, the situation has been partially improved in terms of species restoration, however, specialists note that even more work is necessary so as not to lose this oasis, which is so important for the region.

In July, another survey was conducted by both hydrologists and foresters, where the positive results of the gabion in the floodplain of the Iori River were revealed. 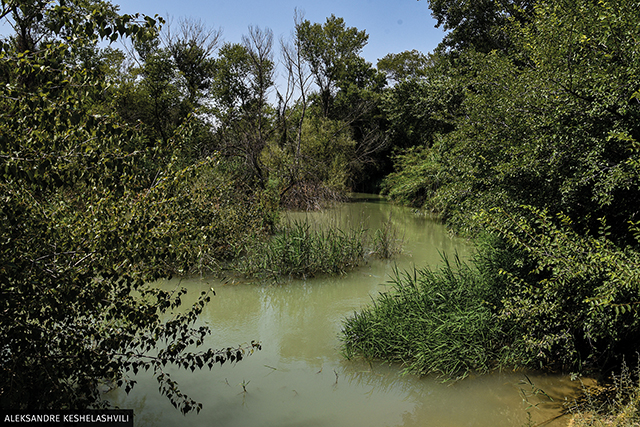 GEORGIA TODAY wanted to find out more about the study results from SABUKO’s representatives and partners.

“As you remember, we arranged a gabion that helps flood the floodplain forest,” says Aleksandre Mikeladze, Project Manager. “Initially, our goal was for the gabion to be maximally natural and adapted to the environment, which was successfully implemented. The recent study on the gabion operation results was carried out by various specialists, including a hydrologist and a forester, with different methodology. In both cases, the results are promising and detect positive changes for the environment, which makes us very happy and proud. In addition, SABUKO has been advocating the process of reaching an agreement with the relevant authorities on the periodic release of the Dali Reservoir, which has already been reached. Therefore, in order to restore the Iori floodplain forest, SABUKO plans to flood the pre-studied and defined area using the Dali Reservoir, which has to date never performed its initial function.”

Giorgi Guliashvili, a hydrologist who conducted the study on the spot, highlights the positive and promising changes in terms of flooding the area and the gabion’s contribution to it.

“I evaluated the area from a hydrological angle. The first positive fact that was revealed was that the artificial dam contributed to the flooding of the floodplain forest in the upper reaches of the dam, as well as the wateriness generated in the dry ravines as a result of the atmospheric precipitation in June added to the water released in the lower canal pound of the Dali Mountain Reservoir and helped to flood the floodplain forest as much as possible.

In addition, in the dry ravines from the Dali Mountain Reservoir to the artificially created reservoir, when the water availability was observed, the river sediment entered the bed of the Iori river together with the water. Due to the influence of artificially arranged dam, the accumulated material was deposited in the vicinity of the arranged gabion and in its upstream, which contributed to the reduction in the intensity of the scale of depth and lateral erosion (shore washing).

Importantly, the floodplain forest in the lower part of the reservoir was flooded to about the same scale as in May. The gabion arranged on the river played a positive role in this process, and the area of flooding is approximately a kilometer. The gabion regulates water flow and supplies the algae and vegetation there with the water it needs, regularly. Research has clearly shown this. However, the maximum effect we expected still couldn’t be reached, as from the Dali Reservoir, the planned 70 cubic meters of water per second couldn’t be released due to technical issues. If not, the maximum area we planned would have been completely flooded. However, the gabion performed its function successfully and moreover, it turned out to be a very timely and vital measure for the local biodiversity and floodplain forests. The gabion also reduced erosive processes and the washing away of the river banks around it through its regulatory function, which is also very important for the environment.” 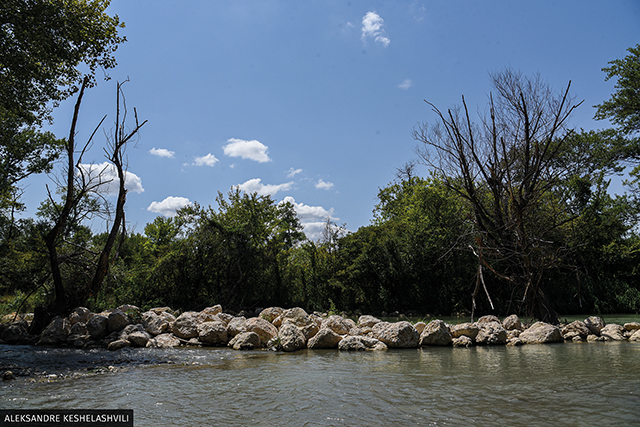 Vasil Metreveli, Forester, Ilia University, during the study observed how intensively the green cover in the area had started to regrow.

“As a result of the study I conducted, I can gladly conclude that new plants characteristic of the floodplain forest have appeared and the area of the floodplain forest has expanded,” he says. “Therefore, it is clear that along with the period of abundant precipitation, the gabion arranged on the river significantly contributed to this process. In the end, taking such measures can lead to partial restoration of unique floodplain forests on the ground and thus save the home of the local biodiversity, including rare species of animals and birds included on the Red List.

“The recent study we conducted in collaboration with SABUKO has shown that through such measures and gabions, the situation has been partially improved in terms of species restoration, but even more work is necessary to preserve the unique Chachuna biodiversity, which is so important for the whole region.”

Zura Gurgenidze, Conservation Studies Manager at SABUKO, notes that the installation of the gabion on the river made life around it more diverse.

“Following the arrangement of the gabion and rising of the water level, a certain microclimate has formed around it. The rising water level made life on the spot more diverse. Although the gabion is new and it’s a bit early to speak about conclusions until at least a year passes, positive changes and signs as a result of its operation are already visible. For instance, the growth of certain kind of vegetation created relevant conditions for sparrows living in the Iori floodplains, which started building nests, and we already have their nestlings there. As I said, it’s still early to talk about its effects and changes thoroughly, but what we have at this stage of the study is promising. Moreover, the gabion was arranged in full compliance with environmental protection standards, so we only expect that this concrete project and similar measures in the future will play an important role in the process of the Chachuna Biodiversity conservation,” he elaborated.