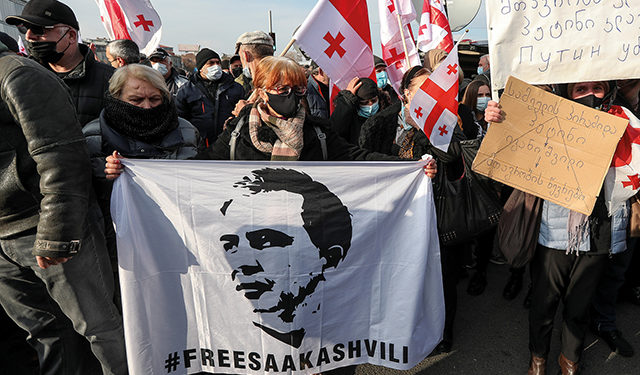 Rallies are to be held countrywide, the UNM and Saakashvili's family claim. Source: Reuters

On May 3, Davit Saakashvili, the brother of Mikheil Saakashvili, the third president of Georgia announced a series of rallies after the deadline given by the family to the government to transfer him abroad for treatment expired.

The ex-president’s family and lawyers say that his condition after his extended hunger strike last autumn-winter, and “inhumane treatment” in prison, is critical, and he needs treatment abroad to survive.

“We have very little time,” Davit Saakashvili said. “We will start actively talking to doctors, we should talk to the Patriarchate about the health of our brother, our President.

“We will continue to hold meetings with the non-governmental sector and civil society and, moreover, we will announce continuous rallies, which we will start very actively after these meetings, across the country. We will start in Adjara, go to Samegrelo, we will go every direction and we will meet people. If necessary, we will also call for a large-scale rally.”

On April 22, a team of doctors set up by the ombudsman assessed Saakashvili’s health and noted that his condition had deteriorated significantly due to anorexia and depression.

On May 6, The United National Movement (UNM) held a rally demanding the transfer of former President Saakashvili abroad for medical treatment. A procession was held near the 12th penitentiary institution in Rustavi.

“After the full consolidation of the international community, the United States, the European Parliament, and individual MEPs regarding Mikheil Saakashvili’s condition, it is now important to organize a public and civil protest. Today, the United National Movement is starting rallies in Batumi and Tbilisi. These will be permanent and continuous rallies until the fundamental rights of Mikheil Saakashvili are secured,” said Nugzar Tsiklauri, a member of the United National Movement.

The US Ambassador to Georgia, Kelly Degnan, stated that they have full confidence in the ombudsman’s office, which is monitoring Saakashvili’s health. She urged the Georgian government to take the ombudsman’s recommendations very seriously.

“We have full confidence in the Public Defender’s Office, which monitors Mr. Saakashvili’s health, and we call on the Georgian government to heed the ombudsman’s recommendations very carefully. This is a person who has a constitutional mandate to protect the human rights of every citizen of Georgia. The ombudsman’s office is doing a very good and responsible job and we have full confidence in her recommendations,” Degnan said.

Koba Nakopia, a member of the United National Movement, said Saakashvili consented to be transferred to “Vivamedi Clinic” for examination and he was moved there on May 12.

“The Ministry of Justice offered the third President of Georgia Mikheil Saakashvili the opportunity to be examined at clinic Vivamedi,” Minister of Justice Rati Bregadze stated.

Chairman of the Georgian Dream, Irakli Kobakhidze, on Wednesday commented on Saakashvili, and noted everything is “becoming very comical.” Kobakhidze said that when Saakashvili went to prison voluntarily, they expected there would be acting-out, self-harm, and more from him.

“This scenario is simple: the prisoner is responsible for harm himself. The penitentiary institutions are responsible for offering services, including medical care. All agencies act with responsibility, and this acting out, these speculations, and claims of injuries that Saakashvili puts out, naturally, will not succeed. Otherwise, any prisoner would give it a try. No agency should allow this,” Kobakhidze said.
He noted that 150 prisoners used to die in prison each year, a figure that has been reduced by 12 times under the previous ruling team. The average is now 10 to 15 per year under the current government, he claimed, adding that all prisoners are provided with proper medical care.

“If you take a look at the penitentiary system, you will see hundreds of prisoners who have more difficult health conditions than Saakashvili, but the Public Defender is only interested in the one prisoner right now. There is political interest in this man. The main interest behind this is to involve the country in the war. Those who demand Saakashvili’s release have the only goal – to get Georgia involved in the war, which we will not allow,” Kobakhidze said.