Saakashvili to Ivanishvili: You Made Very Wrong Bet on Putin’s Victory in Ukraine 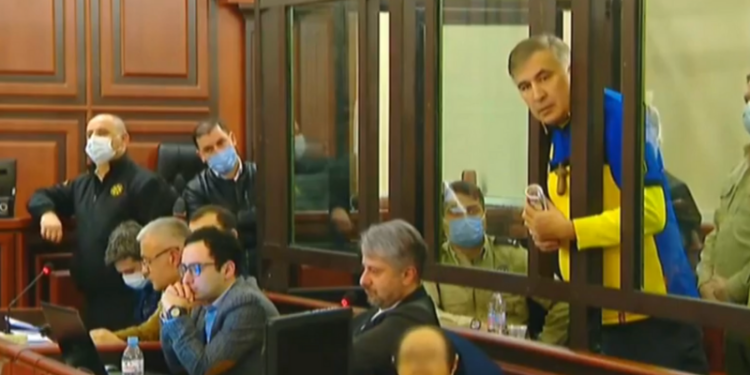 “I have bad news for you, Ivanishvili. You made a very wrong bet, brother, you were lucky before, but now you put a bet on Putin’s victory. How could you get cheated like this?” the third president of Georgia Mikheil Saakashvili thus addressed Bidzina Ivanishvili at his trial.

In his speech, he also questioned the fact that Prime Minister Irakli Garibashvili and Minister of Foreign Affairs Davit Zalkaliani contracted Coronavirus at a time when the situation in Ukraine was tense.

“You hid in the bushes and made them release a resolution, Garibashvili got infected with COVID when Andrzej Duda was coming. He demanded a meeting with Prime Minister of Georgia, he can talk to Salome Zurabishvili about the weather, but Salome Zurabishvili does not decide anything. He demanded a meeting with Prime Minister Garibashvili, however, Garibashvili evaporated, he was said to be infected with Covid.

“When UK Foreign Minister was about to call, Zalkaliani contracted Covid… As if he could not speak during Covid. Then they said let’s talk at the deputy level and all four were busy.

“In short, you completely failed in this situation,” Saakashvili told Ivanishvili.

He noted that today Georgia is “completely alone against possible Russian aggression.”

The trial of former President Mikheil Saakashvili and former head of the Special State Protection Service Teimuraz Janashia, accused of embezzling large sums of money, is being held at the Tbilisi City Court today. The Prosecutor’s Office accuses the defendants of embezzling a large amount of budget money – GEL 9 million.

“I will go, what is the point of being here? Everything is already clear,” he said. He does not plead guilty and believes that the trial is being held formally, and his verdict has been decided in advance by the founder of the Georgian Dream, Bidzina Ivanishvili.