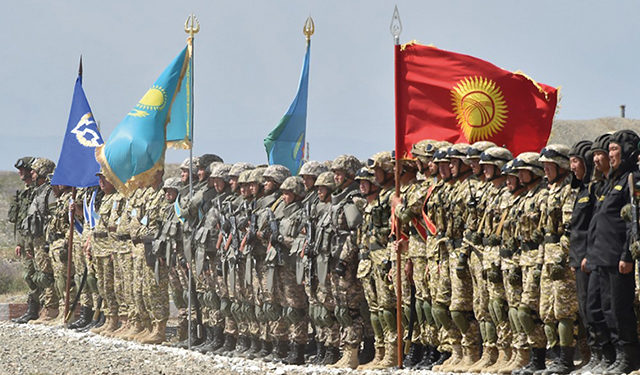 Moscow’s decision to activate CSTO signals the emergence of an entirely new approach in relations between Russia and its immediate neighborhood.

The Kremlin has always argued its special interests in and ties to what once constituted the Soviet space. What Russia struggled with though was to produce a smooth mechanism on how to deal with the neighborhood where revolutionary movements toppled Soviet and post-Soviet era political elites. This happened in Georgia, Ukraine, Moldova, Kyrgyzstan and recently was attempted in Kazakhstan.

Russia’s responses differed and depended on each specific case, but mostly were based on using separatism in the neighboring states to preclude Westward aspiration. Rarely did Russia get support for its actions from its allies and partners. This created tensions, underlined the lack of legitimacy, and generated acute fear even from relatively friendlier states that Russia one day could turn against them.

But with CSTO activation in Kazakhstan, it seems to be an entirely different matter. Here, Moscow employed an element of multilateralism. It worked, as it seemed to be a group effort, though it was Russia which pulled the strings and contributed most of the forces sent to Kazakhstan.

CSTO activation is also about something else. It blurred the boundaries between Russia’s security and the security of neighboring states. Putin stated the situation in Kazakhstan concerned “us all,” thereby ditching the much-cherished “Westphalian principles” of non-intervention into the internal affairs of the neighboring states. The emerging Russian vision, therefore, is about applying intervention when security is challenged.

In many ways, Russia always wanted to imitate the US, which in its unipolar moment often resorted to military campaigns to alter the nature of regimes in the Middle East. Liberal internationalism, with an emphasis on human rights, allowed America and its allies to operate with a certain level of legitimacy and moral obligation. Russia lacked such ideas. Until now. Upholding security and supporting conservative regimes has now turned into Moscow’s official foreign policy tool. Protests in Belarus and Kazakhstan helped the Kremlin streamline this vision.

Since Moscow considers its neighbors unstable, the need for intervention when security is threatened could now serve as a new dogma. It does not mean that the CSTO will exclusively be used in future when it comes to crises along Russian borders. On the contrary, Russia will try to retain maneuverability and versatility in its moves. The CSTO option will be kept as yet another element in “pacifying” its neighborhood.

Tied to upholding security in the neighborhood, Russia also advances the concept of “limited sovereignty,” whereby Moscow allows its neighbors to exercise only a limited level of foreign policy. Significant maneuverability will be deemed as dangerous, possibly upending Russia’s interests.
More importantly, the events in Kazakhstan also showed that Russia is now officially intent on upholding the conservative-authoritarian regimes. This fits into the broader phenomenon scholars have been arguing recently, of authoritarians helping other authoritarians. Moscow is essentially exporting its own model abroad, an export which includes essential military and economic help to shore up faltering regimes.

But Moscow does this also for the multiple opportunities its help would provide. Take, for instance, Belarus, where with Russian help the current leader Lukashenko managed to maintain his position. The end result is Minsk being ever more beholden to Moscow and essentially negating any remnants of multi-vector foreign policy it tried to pursue before 2020.

A similar scenario is now opening up in Kazakhstan. The country, which famously managed to strike a balance between Russia and China and even work with the US, while inviting multiple foreign investors, will now be effectively pursuing a different mode of relations with Moscow that will be similar to the Belarus scenario, short of integration talks. Russia fears crises, but it is learning to benefit from them, and this is the most striking development in Moscow’s foreign policy. In a striking difference how Russia handled Georgia and Ukraine, its ability to navigate Belarus and Kazakhstan and the Armenia-Azerbaijan conflict shows evolution.

Russia thus unveils a new vision for its neighborhood. It is essentially a concept of hierarchical order where Russia is at the top of the construct and the neighbors have to abide by specific rules. Failure to do so will produce a concerted military response.