Russia’s Violations and the Prioritization of NATO Membership 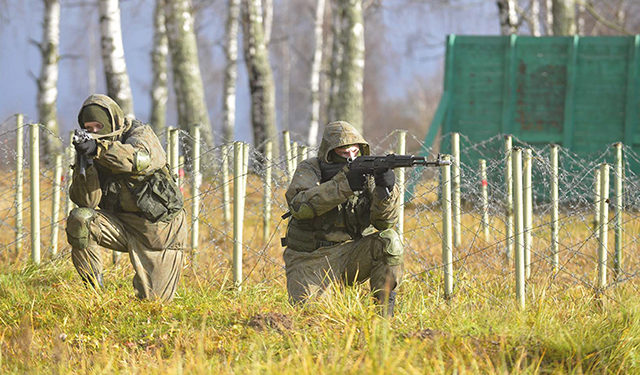 Image source: Ministry of Defense of the Russian Federation

March 7, 2021 should have been a day that rocked the nation. It should have shaken not just the people and government of Georgia, but Europe and NATO officials to their core. It should have elicited some of the harshest action and diplomatic, economic, and cyber repercussions to date. On the contrary, this date went largely unobserved, and was swept under the proverbial rug in many news outlets. The brash, detestable, and disgusting assault against the sovereignty of the Georgian nation by Russian special operations members disappeared from the news like a demon’s whisper.

On that day, Ramaz Chalauri woke up to coax his tractor into action and plough his fields in the biting cold. A pair of Russian occupation forces members, most likely a part of the regionally assigned GRU surveillance and abduction teams, breached their so-called boundary line and moved deeper into Georgian sovereign territory. The two made their way through the old village and fields, surely hunting for their next abduction victim.

Chalauri noticed the two maneuvering towards his position and decided against remaining there, abandoning his tractor and making an emergency call to the police. The two Russians, noticing their prey feeling and possibly notifying authorities, opened fire in a last ditch attempt to save their bungled operation. As the responding police teams closed in on the Russians, it was clear the game was over.

While their apprehension and processing was not clearly described by the authorities, the savior of a Georgian against an occupying force should have been held in much greater regard by the media, the government, and by the authorities overall.

This is not the first time Russia has crossed their so-called border to kidnap innocent civilians to be used as political bargaining chips. The practice has almost become standard drill for the occupation forces. However, things may begin to become far more difficult for the occupiers as heightened talks between Georgian, European Union, and NATO officials revive promises of additional partnership initiatives and nearing membership.

In a recent meeting, Georgian Prime Minister Irakli Garibashvili and NATO Secretary General Jens Stoltenberg spoke on the matter at length in Brussels. While talks included the recent political events in Tbilisi, it was affirmed that inclusion and membership were still very much priorities. While so many see this as a “holy grail” for the nation, it’s the events that take place afterwards that would have greater impact.

Russia has long warned against the admittance of Georgia into NATO, even going so far as to threaten a “terrible conflict” should they be onboarded. The dominance of the Black Sea, a relic of the Soviet Union, is still at the forefront for senior officials in Moscow. Recent actions in Ukraine attest to this.

From covert and subtle underground destabilization operations against the Ukrainian state, to outright violations involving the recent deaths of multiple Ukrainian military service members, it’s clear their aggression is still alive. With the implementation of S-400 Triumf missile systems near Sevastopol, it’s all too obvious that the old soviet objective of seizure of the Black Sea is their goal. Georgia has been a thorn in their side in this objective. In addition, a hold over Georgia would further cement their dominance in the South Caucasus overall, as their forces deployed in Nagorno-Karabakh and Armenia proper are isolated.

With Turkey in the firm grasp of NATO, and already a near-enemy in the Syrian and Nagorno-Karabakh regions, it’s only Georgia that stands in the way of regional control and firm leverage against NATO. Because of this, both powers have been pulling on each leg of the nation in an effort to deny the other.
While the military has largely been converted to a NATO standard through its past and current contributions to the missions in Mali, Central African Republic, and Afghanistan, it still stands to step up to the full strength of a NATO force. Sadly overlooked, the size of the force is woefully minimal compared to the threats that lie on the doorstep. For a country with one of the world’s largest military powers actively taking offensive measures against the state, it’s surprising to see such an undermanned warfighting force.

With just under 40,000 active military service members, Georgia has less military service members than The Netherlands, but with exponentially greater territorial risk. If granted NATO membership, it should be painfully imperative that the force size needs to be expanded. While doing so, the standards and training must remain the same, if not higher. A page could be taken from the Israeli Defense Force on total social change towards combined national defense, and a serious examination at a holding of the proverbial line.

With this type of social change, Georgia stands to be the poster child and model example of the NATO force on the frontier: a force on constant stand-by and a people ready to back their fighting men and women. While this kind of shift is incredibly large, it’s not outside the realm of reality as we look at Israel, plagued with its own territorial woes.

For Georgia to not only advance into NATO, but succeed and thrive, more than a simple elevation in its military is necessary. Russia only responds to strength, and that strength can’t come from the military alone. The issuance of new weaponry and equipment can make the Georgian military more aesthetically pleasing to the Western eye, but the populace needs to back this with a renewed vigor against Russian tyranny.