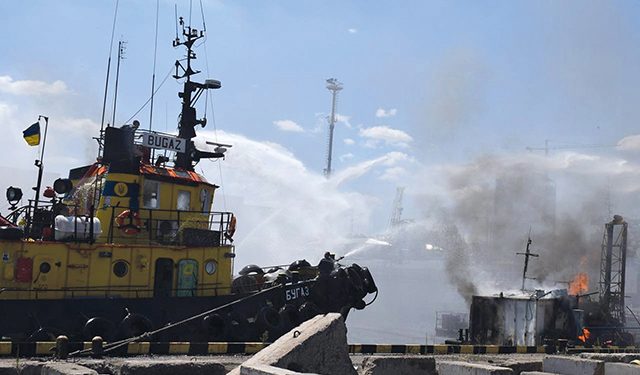 Ukrainian forces attacked the Antonovsky Bridge in occupied Kherson in southern Ukraine this week, with the army releasing footage appearing to show the bridge being shelled. The bridge is a crucial supply route for Russian forces occupying the city.

Meanwhile, Ukraine’s President Volodymyr Zelensky has again condemned Russia’s use of gas supplies to Europe as a weapon and bargaining chip, saying Moscow is using gas “price terror” against the continent.
Russian state gas giant Gazprom again cut gas supplies via the Nord Stream 1 pipeline from Wednesday, saying this is due to “maintenance of a turbine,” a claim rebuffed by European officials.

Klaus Mueller, head of Germany’s energy regulator, said gas flows had dropped to 20% of the pipeline’s capacity on Wednesday, from 40%.

“Technical pumping capacities are down, more restricted. Why? Because the process of maintaining technical devices is made extremely difficult by the sanctions adopted by Europe,” Peskov said.

Officials: EU consumers should prepare to use ‘less heat’ in winter

With EU countries agreeing on Tuesday to cut their gas use by 15% over the winter months in order to mitigate the impact of lower supplies from Russia, how and where each member state will make those reductions, which will be voluntary unless there is a supply emergency, will be closely followed.

“Member states are best placed to decide where they will cut the gas for this winter,” European Commissioner for Energy Kadri Simson told CNBC on Wednesday.

Ports begin operations to export grains and other agricultural products

The Ukrainian navy said on its Facebook page that the ports of Chornomorsk, Odesa and Pivdenny are preparing to resume grain exports from Ukraine.

Russia and Ukraine signed separate accords with the UN and Turkey on Friday to reopen Ukraine’s Black Sea ports to grain exports, in an effort to ease an international food crisis caused by Russia’s invasion of Ukraine.

The deal follows a month’s-long blockade of dozens of Ukrainian ports sprinkled along the Sea of Azov and the Black Sea.

Less than 24 hours after the deal was signed though, Russian missiles hit Odessa, Ukraine’s largest port.

An unnamed senior Turkish official told Reuters that the first ship is likely to depart Ukraine’s Black Sea ports in a few days.

Russian-backed forces had previously said they captured the plant. The UK Ministry of Defense said a private Russian military company “likely succeeded in making tactical advances in the Donbas around the Vuhlehirska Power Plant,” adding that some Ukrainian forces have “likely withdrawn from the area.”

A Ukrainian official said Sunday that the country’s southern region of Kherson, which fell to Russian troops early in their February invasion, would be recaptured by Kyiv’s forces by September.

“We can say that the Kherson region will definitely be liberated by September, and all the occupiers’ plans will fail,” Serhiy Khlan, an aide to the head of Kherson region, said in an interview with Ukrainian television.

The Ukrainian army, emboldened by deliveries of Western-supplied long-range artillery, has been clawing back territory in the southern Kherson region in recent weeks.

“We can say that a turning point has occurred on the battlefield. We see that the Armed Forces of Ukraine are prevailing in their most recent military operations,” Khlan said.

“We see that our armed forces are advancing openly. We can say that we are switching from defensive to counteroffensive actions,” he added.

He noted that Ukrainian strikes on two key bridges in the region, as well as attacks on Russian arms depots and command posts, were part of preparatory work for a ground offensive.

“Now the key issue is getting more precision artillery strikes on the frontline to knock out the orcs (Russians) from their current positions.”

Russian forces seized the region’s main city, also called Kherson, on March 3. It was the first major city to fall following the start of Moscow’s military operation in Ukraine in late February.

Moscow previously said it destroyed several of the high mobility artillery rocket systems (HIMARS) supplied to Ukraine by the West, in claims denied by Kyiv.

On Monday, Ukraine’s defense minister Oleksiy Reznikov underlined the growing impact that the HIMARS appear to be having as Ukraine tries to repel Russia’s invasion.

Ukrainian officials have said repeatedly that Western supplies of weapons are critical to Ukraine’s military effort, and underlined the importance of the HIMARS because of Russia’s artillery supremacy in terms of numbers and ammunition.

Russia has criticized the United States for providing Ukraine with instructors to help Ukrainian forces use HIMARS.